John Edwards will be talking to addicts and those suffering “from the grave before they get there and show them hope.” 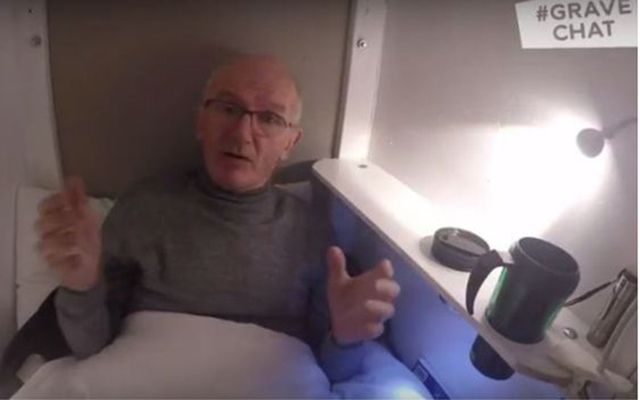 John Edwards is alive and well in Belfast but also buried six feet under. The former addict has volunteered for the ordeal on behalf of the charity Walking Free to raise awareness of addiction and suicide.

On Ash Wednesday Edwards kissed his wife goodbye before jumping into the specially designed grave where he can broadcast his thoughts and chats with addicts to the outside world via social media.

Some go off chocolate for Lent, but John Edwards decided to be 'buried alive' in a bid to help others https://t.co/3EFIfK5GKI #Gravechat pic.twitter.com/I6fV6qVHxU

He’s taking texts, calls and e-mails from sufferers and hopes to comfort them with his message of “hope”.

“I’m a former addict and I’ve been clean and sober for 25 years,” he told Belfast Live.

“I’m making a very large coffin, I’m burying it in East Belfast and I’m going to live in it for three days.

“I know this is a radical move but people are continually contacting me who are either suicidal or who know friends or family who are,” he added.

“My plan is to speak to them from the grave before they get there and show them hope.”

And it won’t even be the first time the 61 has been buried alive. In 2016 he was buried underground in Halifax, England in an attempt to similarly raise awareness.

Something he said that touched me: "my plan is to speak to them from the grave before they get there and show them hope..." #Gravechat

Edwards’ activism is easy to explain: he has lost more than 20 of his friends to addiction and suicide.

"I'm desperate to reach as many people as possible," he said simply.

And near-death experiences are nothing new for the born-again Christian who has overdosed several times himself, beaten cancer twice, survived homelessness, overcome child abuse and needed a liver transplant after contracting Hepatitis C.

David McClay the rector of the local church where Edwards is buried was effusive in his praise for his efforts. “John is going into the coffin on Ash Wednesday which marks the start of Lent. The season of Lent is one when Christians talk about dying to ourselves,” he said.

Edwards will be resurrected on Saturday but in the meantime you can keep up to date his message of hope and new beginnings on a live stream on his YouTube channel or Twitter by searching #GraveChat.

And if you think three days is a long time to be buried beneath the ground spare a thought for Tipperary man Mike Meaney who spent 61 six feet under in 1968.