Lost portrait of great Irish chieftain somewhere in US

Missing portrait of great Irish chieftain is in America and worth $500,000. 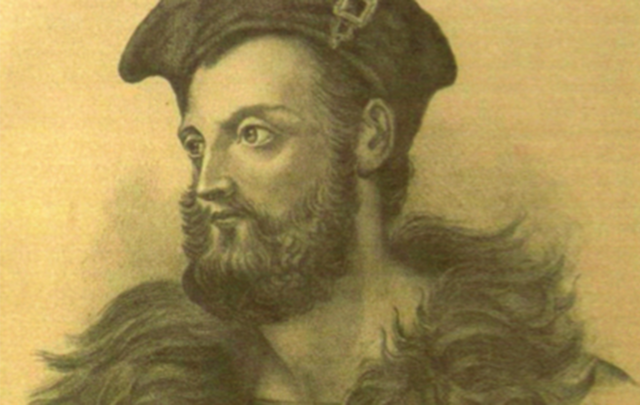 Missing portrait of Owen Roe O’Neill could be worth $500k.

Can you help find the famous portrait of Owen Roe O’Neill?  It went to America in the late 1880s or early 1890s and has been lost to public view ever since. It may be hanging in a private home or in an Ancient Order of the Hibernians (AOH) club or in some Irish bar or your Granny’s attic!

It could be worth up to $500,000 but is in many ways priceless, as it is an extremely rare work of art commemorating one of the greatest Irish chieftains. If you know its whereabouts please contact Hiram Morgan, a University College Cork expert who is hot on the trail of the painting.

Owen Roe O’Neill (Eoghan Ruadh Ó Néill in Irish) was the Irish Catholic General who won the Battle of Benburb.  O'Neill left Ireland as a young man and served in an Irish regiment in the Spanish army. He returned to Ireland late in life during what are known as the Confederate Wars. His greatest victory was in the Battle of Benburb where he led his army to victory over the Ulster planter army led by the Scottish General Robert Munro on June 5, 1646.

He died at Clough Oughter Castle in County Cavan in 1649. At the time he was still in command of an intact Ulster army just as Cromwell was advancing across Ireland. A damnable twist of fate.

Owen Roe O'Neill was a hero to 19th century Irish Nationalists. He was immortalized in a marvelously evocative ballad by Thomas Davis, entitled ‘The Lament for the Death of Eoghan Ruadh O’Neill’

“Sagest in the council was he, kindest in the hall,

Sure we never won a battle—’twas Eoghan won them all.

John F. Kennedy quoted those very words at an Irish event in New York some years before his death.

His portrait is one of the most romanticized images in nationalist history: a middle-aged Owen Roe O’Neill depicted in profile, bright-eyed, bearded, wearing an Irish mantle and bejeweled bonnet.

This image of him quickly caught the public imagination when it first appeared as a lithograph in the 1856 edition of The Ulster Journal of Archaeology.

It had been sourced in County Derry where it was ‘faithfully copied’ from a small oil painting (12ins by 16) owned by an old lady who was a ‘lineal descendant of Owen Roe.’ The back of the painting bore a half-obliterated inscription – ‘Owen Roe O’Neill at the Court of…by the celebrated Dutch artist, Van Brugens.’

The 1856 lithograph was not in color, but the subject’s hair was described as ruddy rather than straight red and his bonnet blue.

In 1879 Sir John Gilbert, librarian of the Royal Irish Academy, reported that the painting had been inherited by Alexander Falls Henry of Maghera, Co Derry. This country solicitor died five years later.

In the middle of the twentieth century, the costume historian H.F. McClintock searched for Henry's descendants but found neither them nor the portrait.

In last few years Dr. Hiram Morgan of University College Cork has taken up the search. His researches have included the last male of the Henry family who immigrated to Melbourne in Australia in the 19th century. He allegedly took the portrait with him as a family heirloom. However, investigations there did not turn up any record of the painting. The family line ended in 1950.

Fortunately, information has recently been brought to Morgan’s attention that the painting was sold at the request of the sister of its last Irish owner Alexander Falls Henry after his death in 1884.

It was offered for sale to public institutions in Ireland but when they failed to purchase – ‘it was in consequence sold in America’ to an unknown buyer.

So, the painting is most probably in the United States. It might be in some museum now or belong to an institution like the AOH or be in private hands.

* If you have it or know where it is, you have a unique and priceless piece of Irish history. Hiram Morgan can be contacted at h.morgan@ucc.ie.