The horror of the coffin ships as they made way across the Atlantic crowded with thousands of Irish immigrants remembered in New Haven exhibit. 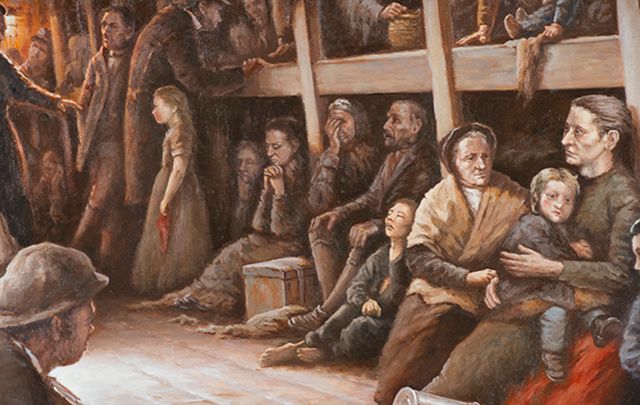 Below Decks by Rodney Charman is just one of the heartbreaking pieces of art on display at the "Fleeing Famine" exhibit in Knights of Columbus museum, New Havan. Knights of Columbis museum.

Artwork depicting the horrific conditions aboard coffin ships packed with Great Hunger Irish immigrants is one of the focal points of an exhibit featured in Connecticut's Knights of Columbus museum this year.

So named because the brutal passage aboard these ill-equipped vessels often meant death for passengers, the coffin ships ferried some 1.5 million Irish to North America during the later years of the 1840s as they fled famine and poverty in their native isle. With a further million dying of hunger in Ireland, Irish of all ages took their chances on passage to Canada or the United States, in a quest for refugee that is echoed today by the plight of Syrian refugees willing to risk their lives to cross the Mediterranean Sea.

Carefully curated by museum curator and registrar Bethany Sheffer, “Fleeing Famine: Irish immigration to North America, 1845-1860” focuses solely on the tragic journey that these Great Hunger immigrants were forced to undertake and attempts to re-enact at least a portion of the cramped and crowded conditions by transforming some of the exhibit space into a part of the deck of the ship. Thankfully, this reimagination lacks the disease and sickness that would also have accompanied the tired and hungry travelers on their perilous journey.

“With our space, it has its unique challenges,” Sheefer told IrishCentral. “What we did was include a fire pit that would have been on top of one of these ships and that's where they would have cooked their meals…”

“It would have been metal so we used brick and wood but it does give you an idea of all these people having to work on cooking over this tiny little fire pit.

“We based that off one of the images that's in the paintings so it's probably not completely to scale but it's enough that you get an idea of what it would have looked like.

“When you go onto the ship [in the museum], it's obviously not meant to be exact but it does still give you a feel that you are boarding a ship.”

The images in question are six oil paintings from artist Rodney Charman, which he created through historical research to depict the grueling passage of the coffin ships. The museum acquired the magnificent recreations at the beginning of 2016 and used them as inspiration for this latest exhibition which will run until Fall 2017. Adding to this are bronzes from Ireland’s Great Hunger Institute at Quinnipiac University, who kindly allowed them to appear in Knights of Columbus museum for the year.

While most Americans learn in school of the Great Hunger in Ireland and of the wave of emigration it forced on its people, Sheffer admits that there were some details that still shocked her when she came to put this exhibit together.

“Actually the sheer numbers of people and how many were on a ship, that kind of thing, and the actual conditions that you would find in a famine ship,” she said.

Although the awful journeys of the Irish immigrants in the mid-19th century is a horrible memory for many, within the exhibit also lies the hope of the American Dream for the million and a half who survived the passage. Outlined through panels throughout the exhibit is the story of a young Irish lad named Patrick, a genuine passenger on the Washington Irving whose family would build themselves from generation to generation to become highly influential to the US. Visitors will have to wait until the very end of the exhibit to discover just who exactly this Patrick is.

The story of success for Irish immigrants was also one close to the heart of Father Michael J. McGivney who founded the Knights of Columbus, the world's largest Catholic fraternal service organization, in New Haven in 1882.

“Both of his parents were Irish and they both came on famine ships,” explains Sheffer.

“We don't know 100 percent what ships they came on. We have an idea about the father but the mother's name is a lot more common so we couldn't narrow it down for that.

“Our focus is on the Knights of Columbus specifically [within the New Haven museum] but in the beginning, in our McGivney gallery we do talk about his origins and the fact that a lot of these founders were also of Irish descent.”

“Fleeing Famine: Irish immigration to North America, 1845-1860” will be on display in Knights of Columbus museum, New Haven, until September 2017. You can find more information on their website here.

Read more: How much do you know about the Irish famine? Take the ultimate quiz