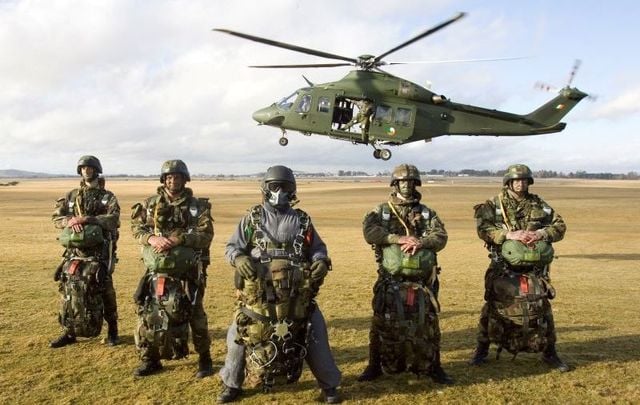 'Irish ISIS bride' Lisa Smith and her two-year-old daughter are the focus of a special operation currently being led by Ireland's Department of Foreign Affairs.

A special unit has reportedly been deployed to assist in bringing Irish woman Lisa Smith and her young daughter back to Ireland from the highly militarized border between Turkey and Syria.

The Irish Independent reports that a highly trained team from the Army Ranger Wing (ARW) of the Irish Defence Forces has been deployed in the past week to assist the operation which is being led by the Department of Foreign Affairs.

A source confirmed over the weekend: "This has been DFA (Department of Foreign Affairs) led and follows months of diplomacy spearheaded by the Irish ambassador Dr. Vincent O'Neill in Jordan.

"To get to this stage has taken a sustained and ongoing effort by Irish diplomats concluding in the deployment of members of the Irish Ranger Wing to Turkey's border with Syria.

"They are acting in an oversight ­capacity and will return home with Lisa Smith and her child at the ­completion of their mission."

Smith and her daughter were reportedly been issued emergency travel documents by the Irish Department of Foreign Affairs before the operation got its green light, according to a report in the Sunday World published on November 3.

A former member of the Irish Defence Forces, Smith, a native of Dundalk in Co Louth, is believed to have left Ireland in either 2013 or 2014 to join her British husband and jihadist Sajid Aslam in Tunisia before going to Syria.

The Irish Times reports that following the loss of most of the Islamic State’s territory, Smith was detained in a refugee camp in northeast Syria. She fled the camp in October with her daughter and walked north before being picked up by a Turkish-backed militia.

It is understood Smith is currently being held by members of the militia close to Syria’s border with Turkey.

Earlier this year, Smith said in an interview with freelance journalist Norma Costello that she wants to return home to Ireland:

In Ireland, Smith may face charges for aiding a terrorist group.

Assistant Garda Commissioner Michael O'Sullivan previously confirmed that Smith was the focus of an investigation in Ireland.

Read More: Irish ISIS bride to return from Syria, will be quizzed by police

On Monday, Tanaiste Simon Coveney said: "We have made a decision to bring both Irish citizens home if we can, and we are working on that.

"But it is not helpful to give details in relation to what is happening in terms of running commentary. This is a sensitive case, we have a good team in our embassy in Ankara working together with the Turkish authorities to try to make progress in this case.

"I would like to say that we are not likely to see a major breakthrough in the coming days, but I am hopeful that within a few weeks we may be able to make progress.”