There were chaotic scenes on the streets of Dublin on Friday, with lengthy queues forming outside famous nightclubs such as Copper Face Jacks on Harcourt Street. 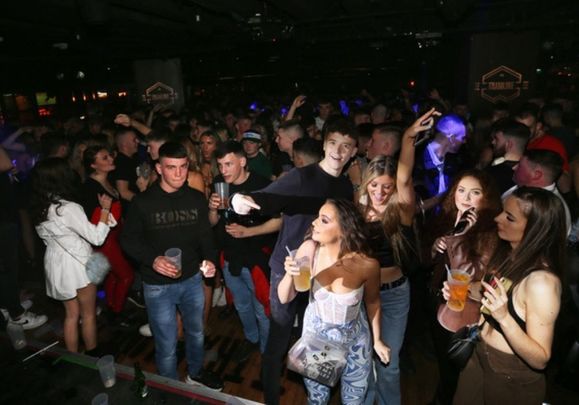 Late-night revelers rejoiced on Friday night as Irish nightclubs opened for the first time in 590 days.

There were chaotic scenes on the streets of Dublin on Friday, with lengthy queues forming outside famous nightclubs such as Copper Face Jacks on Harcourt Street.

Hundreds of people were filmed lining up outside the famous club at 9 p.m. on Friday in footage that has since gone viral, while hundreds more queued up for the Tramline nightclub on D'Olier Street.

Queue for Coppers in Dublin at 9pm as nightclubs reopen after months of lockdown pic.twitter.com/f1GO5x5KUE

Keeva Laird Phelan, who attended Tramline on Friday night, told the Irish Independent that it was "brilliant" to see the return of Dublin's nightlife.

"People need an outlet and some people didn’t have that for close to two years. Now they have that back and it’s brilliant," she told the Irish Independent.

"The buzz is strong. People need to let loose, and that feeling is an underestimated thing - people really need to let off steam and personally, this is the first time in a while that I have been able to let off that steam."

Jack Dunphy, 19, who attended Copper Face Jacks, told the Irish Times that it felt like his generation had been deprived of their "glory years".

"We have missed out, I wouldn’t say on our childhood, but on our middle adulthood. We missed out on our glory years," the 19-year-old said.

Healthcare worker Alana Gill also attended Coppers on Friday and said that the time was right for nightclubs to return.

"I’m a healthcare worker – a radiographer. I’ve seen the hard end of Covid, but I’m glad to get back in a club eventually. I think it is just the right time. We are all vaccinated and I’m happy."

However, the Irish Government has faced criticism for its last-minute decision to make all live music and nightclub events ticketed from next week onward.

The decision, announced at 6 p.m. on Friday, has been described as a "disaster" by Licensed Vintners Association CEO Donall O'Keeffe.

"It is a disaster for late bars, nightclubs, and musicians. It simply won’t be possible to put such a system in place. It contradicts the very nature of social activity in Ireland. Do they know anything about the late-night economy?

"If the Government goes ahead with these requirements then ad hoc late-night socializing will not be possible. It could also have a devastating impact on DJs and live performers as most pubs simply won’t put on such entertainment."

O'Keeffe told the Irish Times that the new measures resembled something out of Father Ted.

"We now have a situation where clubs can sell tickets at the door this weekend but must move to ticket-only in advance by next week," VFI chief executive Padraig Cribben said.

"We’re extremely worried the new guidelines will lead to public order incidents as ticketless groups gather outside clubs. It is unworkable."

Taoiseach Micheál Martin defended the decision, stating that a ticketing system can be "easily" implemented.

"The virus is dictating this," Martin said. Not the Government. The Government doesn’t want to be putting restrictions on people but we have to respond to the virus as it manifests itself"