The brutal death of Fr. Niall Molloy in the master bedroom of Kilcoursey House, a 23-bedroom manor house situated on spacious grounds outside Clara, County Offaly, shocked the nation on July 8, 1985. 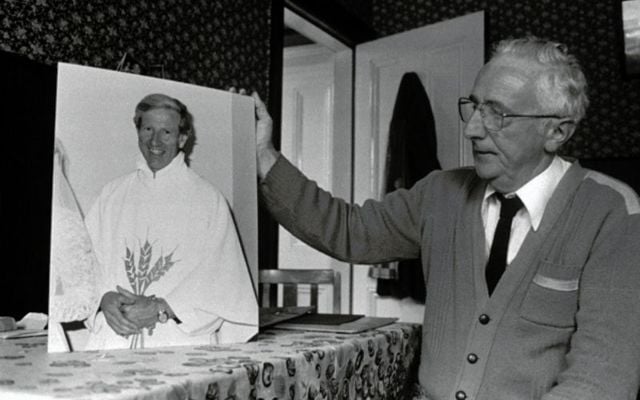 Fr. Niall Molloy's brother Billy poses beside his photograph during a campaign for justice in 1986. Rolling News

The shocking death of an Irish priest in the master bedroom of an Offaly mansion in 1985 is the subject of a fascinating two-part documentary.

The brutal killing of 52-year-old Fr. Niall Molloy in the master bedroom of Kilcoursey House, a 23-bedroom manor house situated on spacious grounds outside Clara, County Offaly, shocked the nation on July 8, 1985.

Gardaí and emergency services were called to the scene more than six hours after Fr. Molloy's was beaten to death and observed that he had wounds to his head and face.

They also observed an eight-feet-long mark bloodstain in the carpet caused by an attempt to move the body or an attempt by Fr. Molloy to crawl to safety.

Businessman Richard Flynn, who owned the 23-bedroom home along with his wife Therese, told officers at the scene that he was "the culprit".

A senior member of An Garda Síochána recalled that Flynn was calm when he was first interviewed at 4:45 a.m.

Flynn said he struck Molloy after a row erupted about going downstairs for drinks and was subsequently charged with manslaughter and actual bodily harm.

At his trial, however, a barrister argued that Fr. Molloy could have died from acute heart failure rather than the blow to his head.

Judge Frank Roe, who was allegedly a "great friend" of the Flynn family, directed the jury to return a not-guilty verdict just four hours after the trial began.

A subsequent coroner's investigation ruled that Fr. Molloy died due to trauma to the head, while a post-mortem that took place immediately after his death ruled that he had been kicked or punched in the head at least five times. The post-mortem added that Fr. Molloy did not die immediately after the incident, while his body was left for over five or six hours before gardaí were called.

On the day before the attack, the Flynn family had been celebrating the wedding of their daughter Maureen to Limerick businessman Ralph Parkes on the grounds of Kilcoursey House.

Fr. Molloy, who was a close friend of Therese Flynn for more than three decades, did not officiate at the wedding but traveled to the house the following day because he believed he was owed a sum of money by the Flynns.

Fr. Molloy enjoyed a privileged upbringing in the Georgian Carrowroe House in County Roscommon and struck up a friendship with the Flynn due to his passion for horses.

The Molloy family, who are seeking answers regarding the killing, believe that Fr. Molloy wanted to stop bankrolling the Flynns and end all financial ties. Richard Flynn was later described as "asset rich but cash poor".

Fr. Molloy's nephew Bill Maher told the Irish Independent that the Flynn family were in difficulty at the time and said that the priest had gone to a solicitor a few days before his death to end all financial dealings with the Flynns.

Maher believes that the motive of the crime was "greed, pure greed".

"There’s only one thing that’s ever been dirtier than sex in Ireland — and that is land and money," Maher told the Irish Independent.

He also acknowledged rumors that Fr. Molloy was in the master bedroom because he was having an affair with Therese Flynn.

"If Niall did have a fling with a woman, it’s not a crime," he told the Irish Independent. "There is nothing anywhere to say it’s true, nothing ever emerged to say it was true. And believe me, a lot of reporters tried to find out."

The two-part documentary, which first aired on RTÉ on Sept. 6 and concludes on Sept. 13, attempts to re-examine the circumstances of Fr. Molloy's death.

Producers have built a set of the master bedroom and interviewed three experts to discuss the events and discrepancies in witness statements.

The documentary also explores the backstory of Fr. Molloy's relationship with the Flynns and attempts to establish a motive using new evidence.

Former Northern Ireland state pathologist Professor Jack Crane appears in the documentary and told Maher that Fr. Molloy had blood and fluid in his lungs, indicating that he was alive for hours after the incident.

Crane ruled out a heart attack and said that Fr. Molloy could have survived if he received urgent medical attention.

Maher has kept the case alive over the past 36 years and returns to his uncle's grave every year for a memorial service. He told the Irish Times that the scars of the incident have never truly healed.

"It’s a sad journey back here every year. Another year, still battling on. I’m getting old. I don’t know how much longer I can keep doing it. But I’ll keep doing it. It has to be done," he told the Irish Times.