Katie Taylor and Amanda Serrano's rumored rematch in Dublin's Croke Park looks like it won't go ahead after some hesitation from Serrano's team. 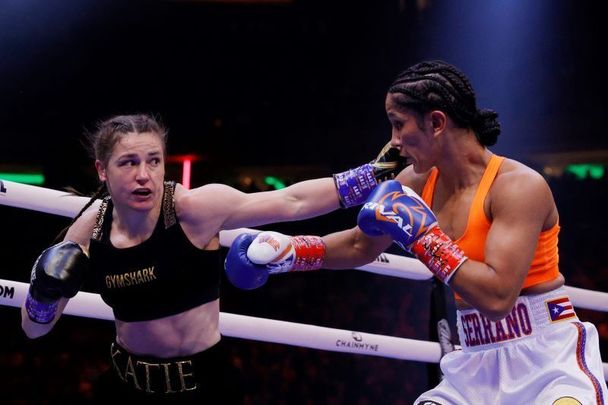 “They don’t want that fight, unfortunately,” Hearn told Pro Boxing Fans this week when asked about the rematch that both Taylor and Serrano previously seemed up for.

“I mean we’ve spoken to [Serrano's promoter] Jake Paul’s team, and they don’t want to go to Ireland. They don’t really want the rematch.

“It’s kind of like, regardless of the offer, ‘we don’t want to do the rematch.’ I think they want to go away, maybe build some confidence, and get a win in August. And maybe we can look at it next year.

“It’s very disappointing because I love that fight and I think it’s a great fight and such a close fight. But, yeah, it doesn’t look like it’s a fight that, unfortunately, Amanda Serrano wants.”

Taylor and Serrano made history when they squared off back on April 30 at Madison Square Garden in New York City, becoming the first-ever females to headline a boxing event at the world-famous venue.

More than 19,000 people turned out for the fight night, including fans who traveled from both Ireland and Puerto Rico.

Taylor, a native of Co Wicklow, was victorious that night, defeating Serrano by split decision and ultimately remaining the undisputed lightweight champion.

During a press conference after the fight, Taylor did not hesitate to commit to a possible rematch with Serrano in Ireland.

“Absolutely, we all want to see the best versus the best,” Taylor told the media.

“A rematch would be phenomenal, and if it was in Dublin, we could sell out Croke Park with 90,000 people, so that would be unbelievable. We’ve seen something special here tonight, so imagine fighting in front of 80 or 90 thousand people.”

Hearn was equally as enthusiastic, saying: “That felt like Croke Park tonight. I am not sure we will get as many traveling Puerto Ricans, but it always and has always been on our mind that it would be a big shame if she (Taylor) didn’t get a chance to fight in Ireland during her (professional) career.

“If we can do that at the back end of the summer, because it was a tough fight and she is going to need some rest, not too much rest knowing Katie, but that is certainly on our mind.”

Serrano’s promoter, media personality and YouTube star Jake Paul, also seemed up for a trip to the Emerald Isle later in the year: “Everyone wants to see a rematch. They (team Taylor) came to New York City, so if there is a rematch, I think it makes sense as a team to go to Ireland."