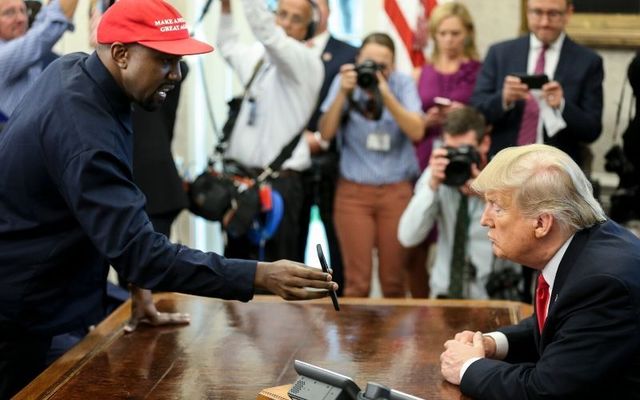 Music superstar Kanye West appears to have announced that he is running for US President in a surprise statement on Twitter on Saturday night.

"We must now realize the promise of America by trusting God, unifying our vision and building our future. I am running for president of the United States! #2020VISION," West said on Twitter.

West has already been endorsed by billionaire Tesla owner Elon Musk in his bid to win the general election this November.

We must now realize the promise of America by trusting God, unifying our vision and building our future. I am running for president of the United States 🇺🇸! #2020VISION

"You have my full support," Musk replied to West's tweet.

West has previously met with Donald Trump in the White House and spoke highly of the current President.

Wearing a red "Make America Great Again" cap, West declared that Trump made him feel like Superman during a meeting in 2018. He then hugged the President and said "I love this guy right here."

This is not the first time that Kanye West has expressed an interest in the US presidency.

He declared that he would be running for president in 2020 at the 2015 MTV Video Music Awards and said at the 2019 Fast Company Innovation Festival that he intended to run in 2024.

West told the audience that he was considering running under the name "Christian Genius Billionaire Kanye West", drawing laughter from the crowd.

West was not joking.

"What y'all laughing at?" he said. "When I run for president in 2024 we would have created so many jobs I'm not going to run, I'm going to walk."

It is unknown whether West has filed the official documents for candidacy, but most states are still accepting submissions and it is still possible that he can run for president.