You heard his name here first - Meagher of the Pen, a prodigy

"He is an emerging writer, you see, of children's stories at an imaginative level akin to that of J.K. Rowling and even Dahl." 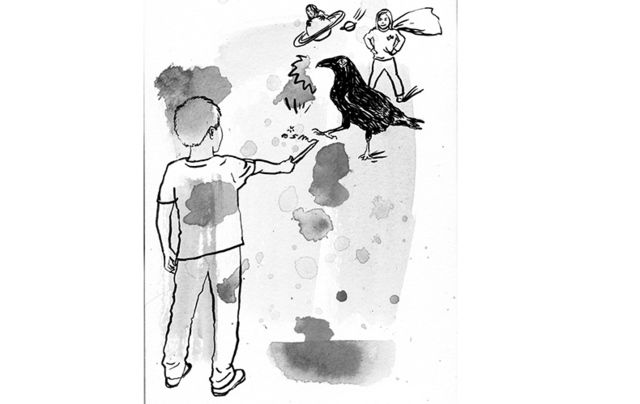 I think I have a lovely lighthearted true story for all of you this week. I think, also, that I would like you all to remember in the years to come that you first encountered this second Meagher of Ireland in this space.

If I am accurate in my prediction -- and I fancy strongly that I am -- then I reckon that this modern Meagher that I first encountered a few days ago at my home will become far more internationally known even than Meagher of the Sword and the Young Irelanders and his heroic exploits in the Civil War over there at the head of his dashing Irish Brigade.

This modern Meagher should henceforth be known as Meagher of the Pen.  He is an emerging writer, you see, of children's stories at an imaginative level akin to that of J.K. Rowling and even Dahl. In years to come ye will be glad that I tipped his talent to you all as early as this.

You see, what happened was that this Reuben Meagher came to my home shyly enough some days ago.  He knew that I write for my living and wondered if I would cast an eye on his first manuscript.  The words were profusely illustrated both by himself and his sibling Oscar, and I sighed inwardly as I began my perusal because, frankly, I was expecting pages of trash and, as has often enough happened me in the past, was already mentally preparing a negative verdict to be delivered as gently as possible.

Instead of that, after just a few pages, I was blown away entirely by the incredible quality of the work of Meagher of the Pen. I was also green with envy and had to struggle to conceal that.

Not at my very best on one of my best days at any period of my writing career could I come anywhere close to constructing the enchanting stories created in his first manuscript by Meagher of the Pen. It cuts me to the bone to admit that, but it is the raw truth.

I am a speed-reader and had expected to flit through the script in a matter of minutes. Instead I was relishing the adventures of Meagher's adventurous Brendan the Bird for three-quarters of an hour at least.  And when the author tried to talk to me during that period I shushed him up at once.

In synopsis, so ye will have some kind of preliminary knowledge about the exploits of the bold avian Brendan long before the book hits the shelves, the yarn is that Brendan, though based on the west coast of Ireland somewhere, is constantly on the move to exotic spots all over the world, sometimes causing mischief and sometimes solving problems and issues which have baffled the locals for centuries.

He is sometimes aided in his adventures by Lynn the Superwoman.  She knows his ways better than anybody on earth and sometimes comes in handy in tight situations. There are many of those as you can imagine.

Our world is not large enough for our Brendan either.  The manuscript illustrations reveal that he looks somewhat like a rook or crow and does not have the wingspan of an eagle or albatross but, because of his special powers and knowledges, he can easily reach all quarters of the constellation.

A journey to Mars or Saturn or Jupiter is no trouble at all to him, and he can solve problems there too. No bother to him. And he solves problems in ways which no adult would even dream about.

For example, there was a chapter when, I think, he found that one community on Pluto, a race of decent folk who loved visiting Irish birds and Lynn the Superwoman, were being totally terrorized and tormented by a huge green witch. She was evil to the core (the illustration of her was horrific!) and had no mercy on them ever.

The bold Brendan, however, being a bit naughty too, discovered from a Plutonese elder that she was called the Poo Witch for centuries of her reign. Brendan took to the skies with a full stomach, flew over her at a height, and made a poo down on top of her hideous head.

With a shriek that was heard on the outer ring of Saturn, she instantly exploded in a puff of yellow smoke and disappeared forever. Brendan and Lynn the Superwoman enjoyed the subsequent celebrations on Pluto for more than a week before returning home to Ireland in a flight which lasted only a matter of minutes.

See what I mean about the work of Meagher of the Pen? In this case, truly, it is even mightier than that fabled sword of the original Meagher.

Harry Potter had better watch out from now on. Another Irish Brigade is ready to charge!

Green though I was with envy, I was man enough to deliver fulsome praise to Meagher of the Pen for the quality of his work. He said he was already working on another script and I said I would like to be one of the first to relish it too.

He promised that he would do that and said he expected to be finished with it in about 10 days. I am waiting for his next call.

I keep the punchline until last. Meagher of the Pen is just seven years old!

As Ripley would say, believe it or not. But every word of this is true except that perhaps I have minimized the extent of my envy.

Tammany time for Joe Biden and the Democrats