What we should learn from the ISIS attack on Manchester

What about the circumstances that allowed the atrocity to happen and about whether it could have been prevented. 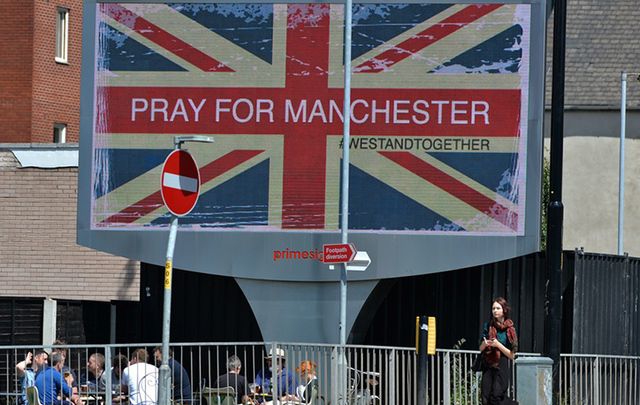 An electronic sign near the arena where the terrorist attack happened in Manchester last week. RollingNews

The horrific bombing in Manchester has raised some uncomfortable questions about British government policy and security. In the immediate aftermath people in the city gathered together in demonstrations of grief and solidarity. But in the days that followed, as the initial terror and shock began to subside, more questions were being asked about the circumstances that allowed the atrocity to happen and about whether it could have been prevented.

As more and more details became known about the suicide bomber Salman Abedi, it began to look like a major failure by the security services and the state.  It also began to look like the initial outrage of British politicians over the early publication of the bomber's name in the American media had more to do with that failure being exposed than their claims the investigation had been compromised.

The British authorities wanted to suppress Abedi's identity as long as possible partly for operational reasons, and the British media initially cooperated in this.  But the authorities also realized their incompetence in dealing with Abedi would be revealed as soon as more about him was known.  They wanted time for the shock of the bombing to dissipate before his name would be released.

Manchester bombing suspect purchased most of the bomb parts 'himself'; appears to have done so alone, police say. https://t.co/4yaleLmyEb pic.twitter.com/vL0VLicM6j

The uncomfortable truth was that the authorities had been given repeated warnings in advance about Abedi being radicalized, including warnings from the Muslim community in Manchester.  There was also the fact that he had been able to travel over and back between Britain and Libya despite being on the list of possible extremists in the U.K.   And that he had come back from Libya a few days before the bombing after an extended visit there during which it is thought he was coached in explosives.

The latest and most damning revelation is that Abedi's movements and activities had been noted by the FBI who had warned the British a few months ago that he was a possible danger.   Yet nothing was done.

Even without U.S. warnings about him, the British should have been monitoring him.  His family background, their involvement in the Libyan war and their ongoing radical views should have raised some concern -- including the fact that his parents and younger brother had recently left Manchester and returned to live in Libya -- yet this was missed as well.   As was the fact that he had dropped out of college, did not have a job, was openly expressing his dislike of western culture and was an angry young man making extremist statements.

The British authorities knew who Abedi was immediately after the explosion because they had found his identity card at the scene.  They had enough time to raid associated addresses before any of his direct contacts could go to ground.

Clearly the authorities would have liked more time before his name appeared in the media.  But the British "outrage" with the U.S. over publication was in large part a diversionary tactic to hide their failure to identify in advance the obvious threat he posed.

The more we learn about Abedi, the more uncomfortable questions it has raised about British policy in general in relation to immigration and so-called home grown terrorists.

Abedi is the latest in the growing list of home grown terrorists, both in the U.K. and elsewhere in Europe and the U.S., who have grown up in the countries and societies they attack.  They become disaffected with their actual home country and identity instead with the values of their ancestral country, be that Libya as in the case of Abedi, or somewhere else.

In the aftermath of the bombing in Manchester there was a concerted effort at official level and in the British media throughout last week to play this down, to praise the multi-cultural aspect of British society and to emphasize the need for communities to "stand together" and not be divided.  Media coverage concentrated at length on the tragic stories of the victims and their distraught families, on public demonstrations of solidarity and on multi-faith remembrance ceremonies.

All of which is understandable.   But the effect was to avoid a full and immediate investigation of who Abedi was, how he came to be radicalized and how he was able to do what he did.   And it also avoided reflecting the reality of multi-culturalism on the grounds which is far more complicated than the picture painted in the media.

Like other cities in northern England, Manchester is visibly multi-cultural, and for the most part this works well. But there are neighborhoods that are almost completely identified with one immigrant nationality and religion and have been so for decades.

Dotted with symbolic bees, a new mural captures the spirit of Manchester in the wake of Monday's terror attack https://t.co/jl3SiRRpmG pic.twitter.com/sh21PzEnjY

This is a legacy of the influx of people who came from the former colonies from the 1950s onwards, when the U.K. needed labor.  There are areas in cities like Leeds and Bradford, for example, which are almost exclusively Pakistani or Indian, where traditional dress is worn and where some of the older folk have never learned to speak English.

The vast majority of the young people in these areas are proud of their heritage and see themselves as British.  But it's a more complex story in some areas where there are concentrations of more recent immigrants from countries in the Middle East which have been torn apart by recent conflicts.  To pretend there is full integration and a full acceptance of British values in these areas is a mistake.

The Abedi family, for example, lived in the Fallowfield area of South Manchester where a sizable Libyan community became established since the time of Gadaffi.  It is an area that has recently produced a number of jihadists who have gone to fight for ISIS and girls who have gone to Syria to became jihadi brides.

In Fallowfield and some of the surrounding significantly Muslim areas, there is a minority of young people who, although born in the U.K., have become alienated from British society.  In many cases they are drop-outs or jobless, have dabbled in petty crime and drugs and appear to be isolated and aimless.  Becoming radicalized gives them a sense of purpose and personal value instead of a feeling of failure.

We have seen this pattern already in other attacks in Europe and it matches what we know of Abedi. President Trump called them "losers" last week, which may sound inane but reflects the reality.

It's a real problem in Britain, France, Belgium and some other European countries with large immigrant populations concentrated in particular neighborhoods.   Being very politically correct about multi-culturalism will not help in finding a solution.

The Manchester bomber is a textbook example.  His parents were granted asylum in Britain over 20 years ago because of their opposition to Gadaffi (his father Ramadan had been part of the Libyan Islamic Fighting Group).  Salman and his siblings were born in Britain but the parents retained their fundamentalist views.

After Gadaffi's death, Ramadan returned to Libya for a time and supported one of the al-Qaeda splinter groups. Although they lived in Manchester, the father and his sons Salman and younger brother Hashem seem to have visited Libya several times in recent years.  There is a chilling picture of Hashem in Libya showing off an assault rifle on his father's Facebook page which is captioned, “The lion Hashem is training."

Given all this and the advance warnings about Salem, the failure by the British security services to stop him before last week's bombing is clearly a major failure.   What is even more worrying is that there are probably other Salems in Manchester and elsewhere nursing their resentments, becoming radicalized and dreaming of making a name for themselves as bombers.

The vast majority of British Muslims -- maybe 99 percent -- do not support violence in any form and have been put in an uncomfortable situation by what happened in Manchester last week.  But the one percent is the problem. It only takes a few Salems to wreak death and destruction on a terrible scale.

Given the number on the watch list in the U.K., estimated at over 3,000, it is a major task for British security.  What seems clear now is that a much more proactive approach needs to be taken, with more expulsions and more re-entry refusals to keep out returning jihadis (hundreds of British Muslims have gone to fight in Syria).  Belatedly raiding houses and rounding up suspected radicals after a bombing, as we saw in Manchester last week, is too little, too late.

One particularly nauseating and hypocritical footnote to last week's atrocity was the condemnation by Sinn Fein. They should have kept their mouths shut, given the devastation of Manchester in 1996 by a massive IRA truck bomb which blew apart the city center and wounded over 200 people.

Four years earlier in 1992 another IRA attack in Manchester wounded over 60 people.   There were no deaths because warnings had been given allowing police to evacuate most people far enough away.

But in case anyone thinks this gives the IRA some kind of moral superiority over Islamic extremists, it is worth remembering the little boys who were blown apart by the IRA in 1993 in Warrington,  just half an hour up the motorway from Manchester.