We bet you don’t know a John Thomas!

In the best Irish ritual fashion, let’s counter the advent of black November on both sides of the Atlantic by deploying a bit of craic against all its wintry chills and dark realities. 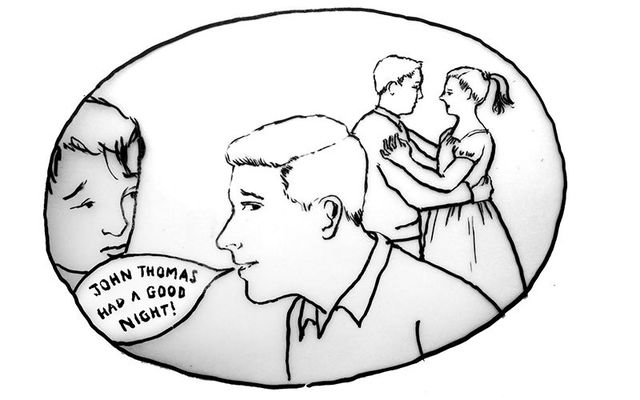 In the best Irish ritual fashion, let’s counter the advent of black November on both sides of the Atlantic by deploying a bit of craic against all its wintry chills and dark realities.

I swear that I am grinning and even laughing out loud occasionally as I attack this keyboard in Killaloe in Clare as I begin this exercise designed to cheer up the most of us, wherever we are, as winter begins to bite us all. So off we go regardless.

I’ve long ago noticed the great interest many of you out in the so-called diaspora keep displaying weekly and even daily about not just your ethnic roots but also, in story after story, week after week, in the most popular Christian names and surnames linked to the Celtic blood in your veins.

This interest manifests itself in a myriad ways, including even the (remote!) chance that the currently pregnant young English royal couple Harry and Meghan might be tempted to attach the name Liam, rather than William, to their expected bambino if it is male, given Meghan’s apparently Irish ancestry.  Not a chance of that happening is what I forecast here and now.

Back to the craic at once. I further forecast with total confidence that, no matter how many Irish born or Irish American men and boys you know well, no matter where you reside, from Boston to Baltimore, you do not know even one who is known as John Thomas. You are friendly with thousands of Patricks, Josephs, and PJs and even John Patricks, given our history and traditional Christian-name pool, but you do not have even one John Thomas in your social or family circle.

Have you ever wondered why that is the situation? You are about to find out in the next couple of paragraphs, and I hope ye forget the November chills as you do and will be delighted if, like myself this minute, you grin and even laugh out loud.

The facts are, especially in the intensely Catholic decades here in Ireland, that John Thomas was the common dialectic or slang word attached to the most socially dangerous element of the male genitalia borne through life by over half of the entire population. I don’t need to be more specific than that today I think. Work it out for yourselves!

And many, many times in my lusty enough youth in rural Ireland, in common with about all my male generation then and since, it was the genetic truth that it was the bold and hungry and totally pagan John Thomas that led us astray or did his best to do so.

Many times I’ve heard lads of that era in the sixties and seventies of the last century especially, blaming John Thomas for leading them blindly into all sorts of difficulties.  “John Thomas,” they would say mournfully, “the hoor led me astray again last night at the dance.”

There was a concurrent reality relating to the said John Thomas, especially maybe during the showband decades in rural Ireland when huge crowds flocked to the ballrooms many nights each week.  Young men coming home, often in rented hackney cars, would often claim that the bold John Thomas had a very successful outing that night, and 99 percent of those bragging stories were lies.

Very properly under the powerful Catholicity of the time, the young women that John Thomas hotly pursued were generally terrified of him, had been well warned about the dangers posed by John Thomas by their mothers and other female family members, and acted and reacted accordingly whenever John Thomas attempted to disturb what would otherwise have been romantic interludes probably leading to a bridal procession up to the altar rails of their local Catholic chapel.

If John Thomas had his pagan way, as of course he had sometimes under the full moons of youth, there was nothing but trouble and scandal ahead for the poor girl, especially if she became pregnant later. This is especially highlighted by the reality of all the dead little infants in the Tuam Mother and Baby Home, and other similar establishments run by the Catholic Church. We know much about that history nowadays in this dramatically changed but still fundamentally judgmental republic.

It seems clear to me this cold Clare month of November, and still grinning away the while, that the infamous John Thomas, operating in a different society nowadays, has long passed away from the era when his name was only spoken in whispers or in the back seats of bragging and lying lads homing from country ballrooms. John Thomas has long since entered a different Ireland where he has infinitely more freedom of movement in all directions.

However, there is one ritual social Celtic barrier he will never cross. That is why your roots-aware Irish circle, no matter where you reside, does not include even one male bearing the Christian names John Thomas. Old customs and traditions die hard as we all know by now.

That’s it for now. And if there is even one John Thomas reading this bit of craic now I hope you enjoyed the reading as much as I enjoyed the writing!