Top players, mostly Irish Americans, hope to accelerate the sport’s growth in Ireland by taking part in the 18U European Championships in Zurich. 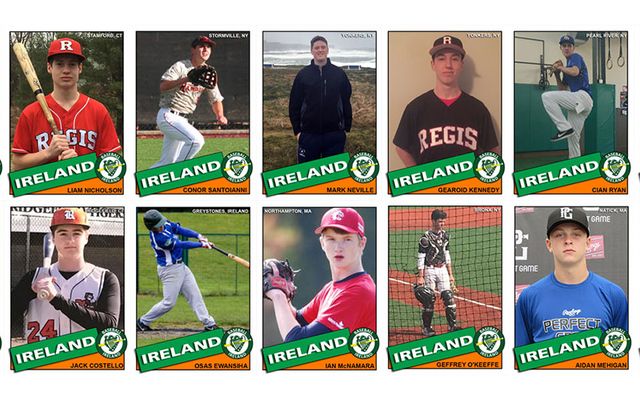 America’s favorite pastime, baseball, is slowly growing in popularity in Ireland.  A team of top players, mostly Irish Americans based in the U.S., hopes to accelerate the sport’s growth, even more, when they take part in the under-18 European Championships in Zurich, Switzerland in July, where they’ll proudly represent the land of their ancestors.

It’s the first time that Ireland will ever field a side in the prestigious tournament says John Fitzgerald, executive director of the New York-based Baseball United Foundation who took a leading role in organizing the Irish under-18 side after aspiring to be a member of Ireland’s national baseball team himself back in 2004.  He didn’t qualify because of the distance of his Irish ancestry -- all team members must be Irish citizens, but those with great-grandparents born in Ireland, like Fitzgerald, aren’t entitled to citizenship.

Instead he made a widely acclaimed documentary about the Irish team in 2006 called The Emerald Diamond, “and when people found out that there was actually a baseball team in Ireland they wanted to donate money or used equipment,” Fitzgerald told the Irish Voice.

“There really wasn’t any way for them to do that so we set up a non-profit, the Baseball United Foundation.”

The foundation works in tandem with Baseball Ireland, the national governing body for the sport in Ireland which is affiliated with the Irish Olympic Committee.  The foundation raises money to promote the sport in Ireland, brings Irish prospects to the U.S. to attend baseball camps, and sends coaches to Ireland to conduct much-needed clinics given the lack of homegrown adults with knowledge of things like sacrifice flies and runs batted in.

July’s tournament in Zurich is expected to bring great results to the under-18 team, Fitzgerald says.  In conjunction with Baseball Ireland, he began recruiting members some time ago via email and connections to high schools with serious baseball teams.

Regis and Fordham Prep in New York, fortunately, had many top players who were either automatically Irish citizens through their parents or entitled to apply via their grandparents.  Players also were recruited from other parts of the U.S., and the team also boasts two teens from Ireland who have played the game for many years.

“It was a long process. Some coaches said they had kids whose parents were from Ireland, and others said they had kids with red hair and would find out. We had to determine if the players were good enough to play at championship level, and if they were willing to go through the process of applying for their Irish citizenship,” Fitzgerald said.

Many of the New York-based team members are proficient in hurling and Gaelic football too, Fitzgerald says.  “We have a few who have played at Gaelic Park.  It wasn’t part of the recruiting process but it was good to see. It speaks to the fact that our team members are close to their ancestry.  It means something to them.”

Kevin and Kyle Brady are twins and teammates from Cornwall, New York.

Fitzgerald will travel to Zurich with a roster of 20 young men who he says will be proud standard bearers for Ireland on and off the field.  “We found a very solid team.  They are excellent scholar athletes who are thrilled to represent Ireland,” he adds.

The search for a youth squad also turned up quite a few younger players who can seed the team in the future.  “We really want to get the word out that if parents have a 14-year-old or a 15-year-old who might like to play for Ireland, we are here to help them do that,” Fitzgerald said.

“The goal is to not only win a gold medal this year, but to create a viable team that can go on from year to year.”

The team set a goal of raising $50,000 to fund the trip overseas, but the onus isn’t on the players or their families – though they have been actively encouraged to spread the word.  Each player traveling to Zurich had to provide a $500 deposit for the trip.  Fitzgerald’s foundation, through its fundraising, is handling the rest.  The response, he says, has been gratifying, with more than $33,000 raised so far.

“We decided early on that we didn’t want cost to be a factor for the players.  If their families can write a check at the end that’s great; if not that’s fine too,” he said.

“We wanted everyone to commit to getting the word out to families and friends and others who might be interested in supporting the team and the growth of baseball in Ireland.”

It’s safe to say that baseball will never replace GAA in Ireland, but Irish-based fans are growing in number and the sport has a dedicated base.  There’s a national senior baseball team in Ireland which won a bronze medal last year in the European C-Pool Championships.  The team is currently ranked 50 in the World Baseball Softball Confederation.

“Through our partnership with the Baseball United Foundation, we’ve been able to assemble a roster of players who live in Ireland and America,” said Baseball Ireland president Tom Kelley. “We expect these players to help Ireland take the next step in developing into one of the top baseball playing countries in Europe.”

The Irish under-18 team will take on Switzerland, Poland, Russia, and Belgium in the week-long tournament which runs from July 10-15.  “We’re going to do very well,” Fitzgerald said.  “Many of our team members have family in Ireland who will be flying to Zurich for the games so it’s exciting for everyone.”

To learn more about the team, or to donate, visit www.irishbaseball.org.