From Neil Armstrong to Steven Bannon - the Irish literally are everywhere! It's worth looking up your own Irish roots. 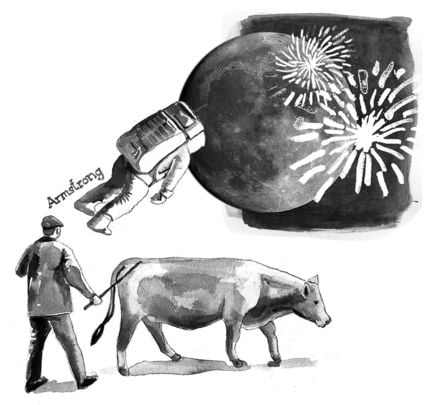 The man on the moon! Neil Armstrong was an Ulsterman wouldn't ye know! Caty Bartholomew

From Neil Armstrong to Steven Bannon - the Irish literally are everywhere! It's worth looking up your own Irish roots.

Sitting by the Shannon and Lough Derg on a sunny Saturday evening on this side of the Mild Atlantic Way, I will be heading out at midnight to view a fireworks display.  It is aimed at highlighting the Brian Boru Festival in the unique heritage towns of my Killaloe and Ballina on the Tipperary shore of the Shannon.   It also marks the first steps taken by the legendary Neil Armstrong on the moon hanging brightly above us all this week of course.

I banish from my zany head all fears of a serious outbreak of war in the Middle East and thankfully, that is easy enough because I’m fascinated by the revelation in an article on IrishCentral about Armstrong’s pride in the fact that he was descended from cattle rustlers in my native Fermanagh. That indeed sends me directly into orbit because I grew up as a boy amongst a whole clan of Armstrongs, and they were a singular species for sure.

What’s in a surname? Delve back through history’s mysteries and commonsense says that the Armstrongs of the past did not get their title by accident.

It is wryly ironic I was writing here recently about Orangemen pipers practicing in our boyhood evenings after their long days of farming in the Erneside meadows and pastures.  Several of them (the worst pipers I’ve ever heard, as I duly reported) were Armstrongs. And, indeed, they had exceptionally muscular arms in all cases.

As I said before, God rest them all, they were genetically designed for hard work on their farms rather than for creating music, even on skirling war pipes.  Their calloused hands, with short, strong, stubby fingers ensured such was the case.

Whatever about the cattle rustling reference, it is a social reality that all the Armstrongs I grew up alongside all those decades ago were the descendants of the Ulster Plantation.  They were all unionists, proud Protestants, mainly of the Church of Ireland species, and fervent members of their Orange lodges.

I’m delighted now I emphasized they were also splendid Christian neighbors even across the surreal divide imposed on us all along the border creating such a problem for the politicians of today. None of them would have believed back then that it would be one of them who would take those historic first steps on the surface of the Moon, but they would not have been unduly surprised either.  A tough and resilient breed those Armstrongs were and are to this day.

I read today that when the NASA systems failed to work properly when Apollo was landing on the Moon that Neil Armstrong had to manually land their vehicle in an extremely challenging operation which was almost the cause of heart attacks below at Mission Control.

It would not at all amaze me either if some astronaut with Armstrong blood in his or her veins is not the commander of the first mission to Mars.  Horses for courses as they say over here.

There were several other significant unionist surnames in our parishes at the time which reflected the fact that John Bull and his cohorts still ruled the most northerly of the Four Green Fields of the Emerald Isle.

One I recall clearly was Noble -- wherever that emanated from -- and there was nothing noble about the way the Nobles made certain in local politics that no nationalists from our minority papish community easily obtained the council houses and jobs which would keep them at home in Ulster.  Probably those rural Nobles were being as canny and clever as Neil Armstrong was as he took those legendary steps into another world.

There was a Noble who explained to me in an interview 20 years ago that, since Roman Catholics were banned from using birth control measures by their church, they would create the kind of large families that, in a generation, would be able to win a vote for a united Ireland.

Wryly again, glancing towards the heavens, it is a personal opinion that, because of the ongoing Brexit another Armstrong will have planted the U.S. flag on Mars before that event occurs. Father Time will tell.

There was another fascinating element about Celtic surnames on IrishCentral lately which any of you who are interested in your ancestry should look up as soon as you can.

I don’t think you are likely to spot a Trump heartland area anywhere during your perusal, but it is true that almost all the clans of the past centuries, despite all our trials and tribulations since the Great Famine, are still very numerous indeed in the geographic areas associated with them.

The “O’s” and the “Mac’s” are still in possession of the baronies long associated with their deeds and indeed misdeeds. Those many amongst you making your first visit to Ireland this summer and fall will, I’m certain, be overwhelmed and touched deeply by the extra warmth of the Cead Mile Failte ye will experience in the townlands and towns and villages where your surname is akin to that of many local residents.

Finally, just for clarity, can I make it very clear to all that, though my late mother was a Bannon from Lisbellaw, I am not related at all, in any way, to a powerful politician around Washington who is a Bannon.

Neither have I any connection, apart from sharing a surname, with the English Kevin McConnell hitting the headlines globally because of having given birth to a baby.  In one of the new gender scenarios that baffle me totally, this Kevin McConnell wishes to be registered on the birth documents as the father of the child in real terms.

The issue is in the European Courts at present. There is likely to be some resolution about the time when somebody you might be related to yourself takes the first steps on Mars.

Meanwhile, there are a lot of fireworks exploding everywhere and I’m off to gaze at the bright face of the rising midsummer Moon.