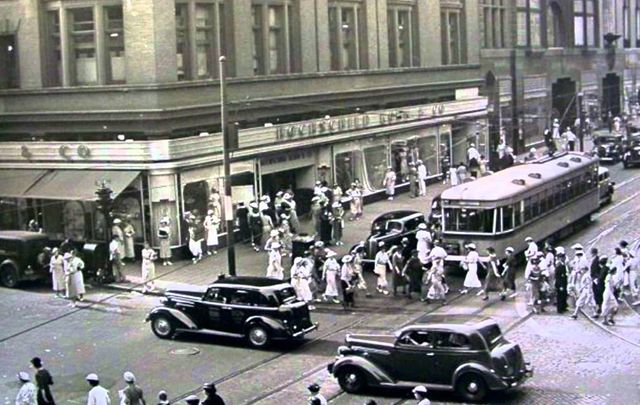 You probably haven’t heard of Margaret Kilkenny, an Irish chambermaid who worked for a while in a hotel just off Herald Square in Midtown Manhattan in the early 1930s.

There is no reason why you should have. She didn’t do anything grand or terrible with her life. It was simply her fortune to run into some other Irish people who were very remarkable indeed.

Every job has its quirks. Margaret learned early on that one of hers was never to turn down the beds in rooms 551-552.

Someone was alive in there, she realized, but all she had ever seen of them was the pale and wrinkled old hand that sometimes reached out from behind the slightly open door to reach for clean sheets and fresh groceries.

It was eerie, the whole set up, she thought. No one came out and no one went in.

Margaret knew she was not to ask any questions but she couldn’t help being curious. Who would live like that, she wondered, day after day, year after year?

On May 5, 1931 she got finally her answer. On this day the door opened wider and a voice cried out, “Maid, come here! My sister is sick!”

Stepping inside the riotously untidy room for the first time, Margaret must have felt she was entering a tale told by Charles Dickens. Inside was 93-year-old Ida Woods, the once beautiful socialite who in later years had begun to be referred to in the press as the Recluse of Herald Square.

Once Ida had been a great beauty, but now she was frail and stooped with a tangle of dramatic white hair that gave her a wild look.  She had lived in these rooms with her sisters Emma and Mary for over two decades.  They had seen no one, they had not been seen themselves.

Looking around, Margaret was astonished by what she saw. There was barely room to stand up or turn thanks to the weird collection of newspapers, magazines, boxes and bits of old cloth the three sisters had hoarded over the decades.

But it was not just bric-a-brac, because according Ozy.com, hidden among all the debris was Ida’s entire fortune. Somehow she had stuffed a million dollars worth of cash and jewelry into Cracker Jack boxes.

Investigators even found $500,000 hidden in an oilskin bag she would hide under her own skirt. As the story slowly came to light after Ida’s death in 1932, so did the hordes of long lost relatives claiming to be her heirs.

Investigators had to slowly rifle though the mountain of junk the three women had accumulated to piece together the story of what had happened.

Ida Woods was not her real name, it turned out. A birth certificate revealed that she actually been born Ellen Walsh, a poor Irish immigrant from Massachusetts.

Ida/Ellen’s “hoarding dilemma emerged from avoiding her biggest fears,” Renee Winters, author of The Hoarding Impulse: Suffocation of the Soul, told ozy.com, referring to the secret millionaire’s deep and ever present fear of being discovered to be an impostor.

It got stranger. The investigation concluded that Ida/Ellen’s younger sister Emma apparently spent her entire life thinking she was the daughter of Ida and Ben Wood when in fact she was really Ida/Ellen’s youngest sister.

It was a hall of mirrors, built on desperation and deceit, and when threatened with the truth she simply retreated from all the play-acting in the hope that she, her family and her fortune would endure.

Ida/Ellen’s story in New York had begun in 1857, where she arrived at the age of 19, looking for a future. Marriage was the tried and tested means of rising in society, so she set herself the task of wooing a wealthy suitor.

She aimed high, writing directly to the editor of the Daily News and brother of the mayor, Ben Wood. In her letter Ida/Ellen offered to “contract an agreeable intimacy with you,” pointedly referring to her good looks.

Weirdly, it worked.  Ida/Ellen and Ben met, fell in love and eventually married in 1867.

Her life as an impoverished Irish immigrant was over. Now she was a wealthy socialite who traveled extensively in America and Europe. She even danced with the Prince of Wales and met Abraham Lincoln.

But she never stopped secretly being herself. When a wealthy banker friend told her in 1907 that he feared a financial crash, the now widowed Ida/Ellen felt the long forgotten trapdoors of her impoverished youth open beneath her feet again. She panicked and retreated from life for two decades.

So Margaret Kilkenny was the Irish woman that Ida/Ellen most feared becoming again, and of all people, here she was in the last days of her life to slowly unravel the truth.