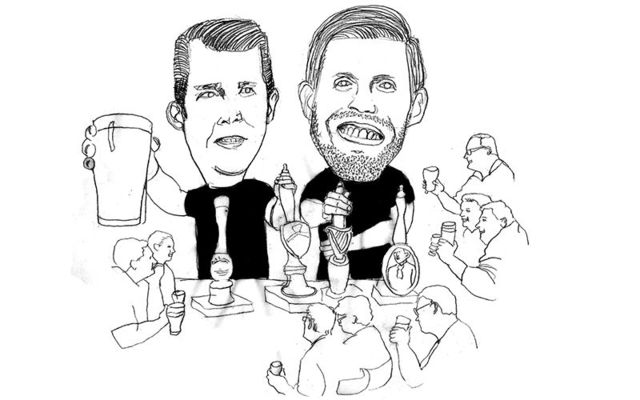 Eric and Donald Trump Jr partied hard in Doonbeg, County Clare, and then skipped out on their bill, allegedly. Caty Bartholomew

“Throughout the world, CNN has a powerful voice portraying the United States in an unfair and false way,” he said.

“Something has to be done, including the possibility of the United States starting our own worldwide network to show the World the way we really are, GREAT!”

He said the United States was great but he meant himself, of course. Because if there's one thing Trump has a high opinion of, it's himself.

State-run news outlets are resisted in most democratic societies because of their association with authoritarian regimes and their marked tendency to parrot pro-government propaganda. In countries like North Korea and China and the former Soviet Union, the media was and is tightly controlled and carefully monitored by the government.

This is what Trump now wants for America. Daily posterior kissing tributes to our Glorious Leader and no criticism whatsoever of our his commands for our great nation.

What's truly depressing is how many in his red-hatted MAGA cult would now accept such a development instead of seeing how deeply un-American it is.

It's not a joke this stuff. It’s tyranny by television: a world where Trump is adored and never criticized.

Because he can't take the criticism, he wants to filter it out completely. He wants to prevent others from doing what he once did himself, criticize President Barack Obama weekly, daily, often hourly.

Because unlike Obama, he simply can't take it. It obsesses him. Bad press is his Achilles heel. And there is so much bad press now.

So what he wants for America is what he wants for himself: to live in a nation that is never fact-checked, where his every utterance is received at face value, where The Washington Post doesn't report that in the first 828 days of his presidency Trump has told us 10,111 lies. That's a tidal wave of falsehoods that's unprecedented in presidential history.

Facts matter. In particular, they matter when they are being denied.

The Washington Post isn't some supermarket scandal rag.  It's one of the last guardians of democracy in these troubled times.

Even now the Post admits there has never been an age in which facts have been denied so often and scoffed at so apologetically as they under Donald Trump.

People hate it, with good reason. Liars want to hoodwink you.  They want you to fall for their schemes. They have nothing but contempt for all that you hold dear.

Liars are the worst.

Former U.S. attorney Joyce White Vance knows all about it. On Monday she told Congress that special counsel Robert Mueller's report on the Russia investigation is enough to “obtain a guilty verdict” on Trump.

Speaking before the House Judiciary Committee, Vance said that Trump would have been charged with a crime if he was not president of the United States.

“Based on my years of experience as a prosecutor, if I was assessing that evidence as to a person other than a sitting president -- the facts in that report would be sufficient to prove all of the elements necessary to charge multiple counts of obstruction of justice,” she said.

She added that the evidence is “not equivocal” and that the decision to charge Trump would not be a close call.

“I would be willing to personally indict the case and to try the case,” she said. “I would have confidence that the evidence is sufficient to gain a guilty verdict and win on appeal.”

So facts still matter, and Muller has produced those facts for all of us.

“As I set forth in the report after that investigation, if we had had confidence that the president clearly did not commit a crime, we would have said so,” Mueller said.

Now it's up to Congress to accuse the president of wrongdoing. But it's also up to us.

Over and over Trump has already shown us what he thinks of the facts. Isn't it time we started doing likewise?