"There is always an unusual quirky element to our weddings and, in this case, that element was provided by a poor fat Mayo pig." 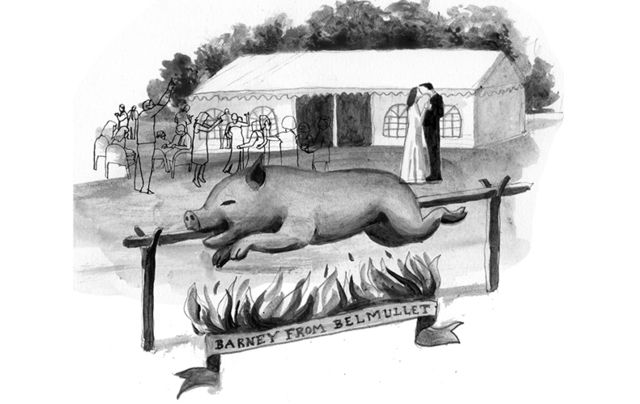 With all due modesty but with considerable pride, I say today that few clans in Ireland celebrate their weddings with more style than we MacConnells do. I embellish that case with a totally factual report of our last wedding in Co. Kerry a fortnight ago.

There is always an unusual quirky element to our weddings and, in this case, that element was provided by a poor fat Mayo pig that we christened Barney from Belmullet.  We will get back to Barney later.

Anyway, the bride was my special niece Kerry, eldest daughter of brother Mickie and Maura.  Kerry married her great love, Francois, a Normandy man now based in Killarney, and a much-liked member of the inner family circle for several years now.

In keeping with the New Ireland their youngest guest was their infant son Cormac Michael.  There was not a Catholic priest in sight during the moving five minute humanist ceremony in which they exchanges rings and promises and hugs and then, in a marquee on the grounds behind the friendly Glenbeigh Hotel on the edge of the village, we all had a mighty celebration for the next three or four days.

All of us, that is, except Barney from Belmullet.

There was a free bar in the marquee for the duration of the celebration, more food than would keep a regiment in action for a month, blazing campfires surrounded by waves of music and song, John O'Connell's band belting out the dance music in the marquee, a large playground for the grandchildren of us all, a wholesome welcome for the large French contingent who had traveled over to support Francois and, in a nutshell, the craic was mighty day and night and mornings after too.

And for myself, I have to say, special moments when I got to cradle young Cormac in my arms.  Special indeed. I have always regretted that none of my own sons named any of their sons after their grandfather incidentally and, with their procreative period still ongoing thank God, I will take them to task on that score before this year will out.

There are three of the original five MacConnells left at this stage, both older sister Maura and younger brother Sean having been taken away from us before their time.  I am the senior survivor in calendar terms but, though it breaks my old heart to admit the truth, infinitely the least of the clan because of the legendary musical and entertainment capacities of younger brothers Cathal and Mickie, both of whom were in flying form.

Cathal, of course, is a cult figure in folk music through his membership of the Scots-Irish folk group the Boys of the Lough, and has sung his songs and played his flutes and tin whistles in about every corner of the world, from Carnegie Hall to the Great Wall of China.

Mickie, spruced up as father of the bride, has composed a litany of great songs, of which probably “Only Our Rivers Run Free” is the most internationally famous and covered by about everybody.  He has many more, and we heard many of them around those festive campfires as the sparks flew and the stars twinkled above, and all the Kerry guests downed their drinks and tried to forget the hammering which Mayo's footballers gave them in the All Ireland semifinal the previous weekend.

The bride joined in the singsongs because she is a lovely balladeer in her own right and, to add extra sauce to the sessions, those enjoying themselves included the great Dingle singer and musician Brendan Begley, a frequent colleague on the musical roads with Cathal and the Boys of the Lough, and the energetic entertainer and storyteller Billie Keane, son of the legendary John B. Keane.  It is in that fabled Keane’s pub in Listowel that Mickie entertains often through the summer season, and the two are close friends.

The three surviving MacConnell brothers were often called upon to perform (with myself being advised gently to tone down my volume and not distort the quality of the songs!) and here's a confession. It is probable I had an extra sup aboard on the second evening when I stood up beside the fire, told the professionals to keep quiet for a while, and loudly reminded them I had written a song which climbed higher up the charts than any of them. True enough too.

And I then roared out my "Christmas in the Trenches 1915" song about that spontaneous soldiers' truce in No Man's Land. And everybody clapped me too, except Barney from Belmullet.

I suppose I better reveal here and now that poor Barney paid the price for that Mayo football success over Kerry a little earlier. The poor devil of a pig was specially imported from Mayo by the family, impaled on a spit over a roaring fire, and was hissingly cooked for about 12 hours before being devoured to the very last fraction of crackling! Some kind of Kerry revenge.

Barney tasted terrific too I have to say.  He added relish to the weekend in more way than one.

There was an additional quirky element to it all. A television crew working for a proposed program on the Irish language TV station TG4 were in the thick of the action in a non-intrusive way the whole weekend. They were shooting a program called Ceol On Clann, (a family's music) largely about Cathal and Mickie with myself squeezed in on the sidelines.

Accordingly, in a few months time, there is likely to be positive proof that there is not one word of a lie in this report of our family wedding. And probably they will even have a shot of poor Barney from Belmullet too.  I will keep ye posted.