The county cannot catch a break in a truly mystifying series of events that defies all description. 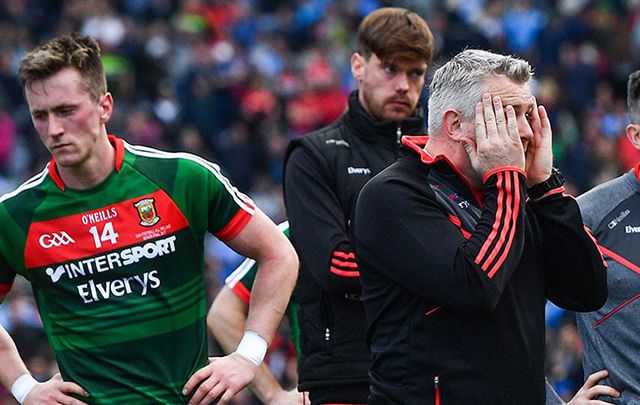 They came by their thousands from all parts of Mayo to Dublin on Sunday, hoping against hope, praying, wishing, bargaining with the gods that they would break the 66-year hoodoo since they last won the All-Ireland football final.

Eleven times since that 1951 final, Mayo has emptied on All-Ireland football final day as the faithful decamped from Castlebar, Ballina, Crossmolina, Geysala, Louisburgh and Westport to seek that elusive crown, the most storied title in Irish sport.

Prayers, novenas, pilgrimages to Knock, climbing Croagh Patrick, you name it. Thousands of Mayo fans had carried out such trips going against type to appease the gods. They even had a priest remove a supposed curse on the team.

In all of sports, has there ever been such dismal record? Imagine a team losing 10 Super Bowl finals, or 10 World Series in a row.

Mayo makes the Red Sox and the Chicago Cubs look like lotto winners, not loveable losers all the way.  Only for bad luck Mayo would have no luck at all.

Would it change on Sunday?

Ten times before they had failed, often so heart-breakingly close that there seemed to be some sinister force preventing them crossing the line.

Last year they went out after a replay; this year they had done it the hard way, winning 10 championship matches before facing the mighty Dublin team in the final.

Dublin was going for three in a row, a feat not accomplished by the side since the 1920s. They had breezed to the final, brushing aside all opposition, but they knew Mayo would be a different opponent than the patsies they had beaten.

The stage was set for a mighty confrontation, the clash of the two best teams by far in the country.

Safe to say that there were 31 counties out of 32 cheering on Mayo, hoping that the dreadful siege would finally be lifted and the Sam Maguire Cup borne across the Shannon to Mayo.

The early moments looked like a disaster however, with Dublin notching an early goal that raised memories of past blowouts where the game ended almost before it began.

But this is a different Mayo side, full of character and vigor. By halftime they were ahead by one point.

It was all to play for and as in the recent hurling final, it became clear a bounce of the ball either way could decide the issue.

And so it was. A Mayo goal set the western followers aflame as they eked out a two point lead.

But Dublin reflects the unflappable attitude of their manager Jim Gavin, a former airline pilot who never betrays the slightest sense of pressure.

The game came down to two free kicks, one by Mayo which struck the goalpost and was cleared, and another by Dublin with time running out which the aptly named Dean Rock, steady as a rock, kicked over the bar to give Dublin the final score and a one point victory.

The final whistle blew soon afterwards and Mayo was vanquished by a single point once again.

Winter is coming in Mayo, and it will be a very long one. The county cannot catch a break in a truly mystifying series of events that defies all description.

Some day Mayo will win Sam Maguire. Someday Ireland will be united.

I’m no longer sure which will happen first.