The joys of virtually surreal August in Ireland

"Through the peak season of a country triumphantly emerging from a long economic recession and austerity has, as always, been hallmarked by pure crazy craic in the worlds of music and dancing and Gaelic sport." 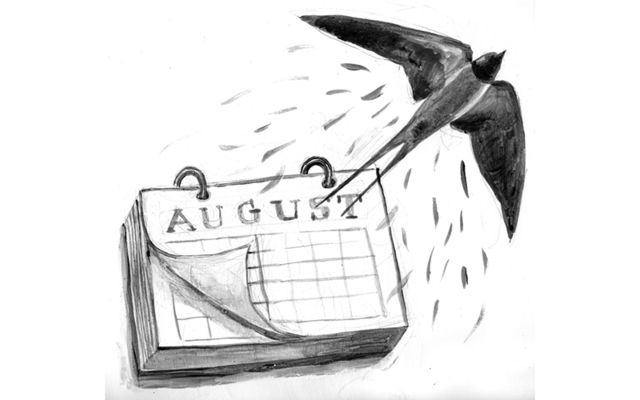 The swallows coming in in August. Caty Bartholomew

It is with huge regret that I observe August descending into the ember days of less daylight and the swallows flighted away to warmer climes and longer, darker nights because, in all fairness, despite international tensions of one kind or another, this has been a truly magical summer along the Wild Atlantic Way of our western coast.

The great Edna O'Brien from East Clare, where I now reside, memorably wrote that August is a wicked month. Maybe she had a few bad ones in her turbulent time, but I wish fervently we could elasticate the month by another 30 days minimum. This year especially, right throughout the region, it has been so special as to be virtually surreal.

So much of what has happened through the peak season of a country triumphantly emerging from a long economic recession and austerity has, as always, been hallmarked by pure crazy craic in the worlds of music and dancing and Gaelic sport in particular.

During a single weekend, for example I heard a mighty cohort of sean nos singers, men and women, raising the rafters in the Irish-speaking village of Spiddal in Connemara. That singsong was still in my ears when, only hours later in Edna’s native Feakle, I was enchanted at their local festival by the playing of local son Martin Hayes, surely the world's best folk fiddler (with Denis Cahill as always) and, at the same festival the next evening the magnificent Cherish the Ladies outfit led by Joanie Madden whose praises I was singing loudly here only a few weeks ago.

Mind-blowing and mind-boggling performances both.  To lift the spirit aloft to flight with those swallows.

The clock goes astray then for the likes of myself, and so it seems like only a few hours later that the Riverdance lord Michael Flatley is officially opening the All-Ireland Fleadh in Ennis down the road from us here and all the Irish musicians in the wide world, hundreds of thousands of them of all ages, shapes and sizes, lift not alone every rafter in the lively town of Ennis (which takes some doing) but even the skies above.

There were a few showers of rain during the craicaganza which the fleadh always provides but nobody noticed at all.  In the center of Ennis, on one of the merry days, I saw scores of dancers, from tiny kids to pensioners, dancing on the streets normally occupied only by cars and coaches.

Concurrently, and it is all a blur, I was across the bridge into Tipperary in the sister heritage town of Ballinacally with daughter Ciara, a keen Galway hurling supporter, being Galway-born, and there in a Tipperary bar which I know well called O'Rians, in a Tipperary gathering, we saw a thriller of a game which Galway won by a magical point scored by Canning.

And all the Tipperary folk shook Ciara's hand and hugged her and wished Galway well in the final soon in Croke Park. More magic.

And a day or two later, a little way east of my turf, I am in the lovely little seaside village of Ardmore and in another great pub called An Tobar (the well!) I see Waterford relatively comfortably qualify to meet Galway in the All-Ireland final by thrashing Cork and yes, in that atmosphere, you do wish that the spirit of August could be elasticated greatly.

Away from music and sport altogether, other special hours and days when the results were finally announced of the critically important state examination at second level which here is called simply The Leaving. The full title, as many of you are well aware, is the Leaving Certificate. It is the watershed exam for the teenagers who have studied hard for it.

Good results have always been seen as a passport to third level education in the state's universities.  Places there have always been keenly contested and are awarded on a points basis. Kids need to secure very high points for entry, for example, to medical studies and suchlike.

This year, for the first time, the points allocation system was changed to allow for more flexible options across the scale of education for the students. By all accounts and statistics, and judging by the wide smiles outside every school gate when the results were announced, the change of format worked very well indeed for the overwhelming majority.

Intriguingly too, because this is a practical rising generation in a different kind of Ireland, many students who obtained more than sufficient points to gain entry to universities are opting instead to go in different directions of life, such as seeking apprentices in the trades, services and IT areas, such being offered in the chain of regional colleges nowadays throughout the land.

Today not all of them want to go to fabled Trinity College or UCD in Dublin. And on the night of the day the results were announced there was as much craic and music, virtually, as had garnished the fleadh.

No, Dame Edna O'Brien, loath though I am to disagree with you, August is not a wicked month at all. We should have three or four of them every year.