The Irish Duchess of Windsor

The informally uncrowned Queen of Bere Island but also it could be said an Irish princess in Brooklyn where she cared warmly for the elderly for many years. 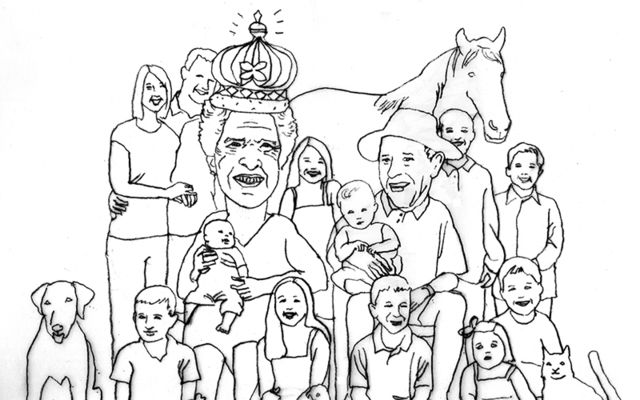 I simply cannot wait to send this yarn over to ye.  For that reason I'm writing it in broad daylight in Killaloe this evening rather than, as usual, tapping away in the small hours of the morning.

I trust that many of you will relish this as much as I do, and I also cannot wait to see what my lovely friend Caty will garnish it with before it reaches your eyes.

What is even better for me is that this story writes itself really.  Anyone in my business will confirm that we wordsmiths often have to pad out relatively slight yarns with our arts and skills.  Not this time for sure.

To prove the point, in relation to the great Queen of Bere Island off the Cork coast I now step aside and quote verbatim the death notice which first captured and then enraptured my old eyes on July 13. It appeared in The Irish Examiner that morning. Now read on:

"POLLINGER (nee McCarthy) HELENA (Bere Island, Co. Cork): She passed peacefully, at her home, in Windsor, CA, USA on June 9, 2017 (83 years) following a short battle with cancer.  Helena (Eileen) never forgot her roots and worked each and every year so that the family could spend more than a month back in Ireland on the island where she had grown up.

"They had a home on the island, a collection of mobile homes, which they tinkered with and added to each year. Also, for 35 years they ran a childrens' sports day on the island which was the highlight of each trip and impacted many young lives. Her career tended towards the care of the elderly as a private nurse and she would spend the later part of which working at Holy Family Home in Brooklyn.

"In the late nineties they retired and moved to Windsor, California near to where their children had settled.  It was there that she spent her remaining years, living with her husband of 51 years, her daughter and her family, while caring for her many grandchildren, dogs, cats, goats, chicken, sheep and the occasional horse who also shared the property. All the while returning to Ireland each summer.

“She will be sadly missed by her husband of 51 years, Leon, son Eric, daughter-in-law Kimberly, grandchildren Cleo and Tian Li and her daughter Tara, son-in-law Michael, grandchildren Lauren and William, brothers Daniel McCarthy (Bere Island) and Pat McCarthy (Farran), nieces, nephews, relatives and friends. Funeral will be held on Saturday, July 15, 2017 at 11 a.m. in Saint Michael's Church in Ballinaskilla, Bere Island, Co. Cork. Ferry available from the Pontoon (Murphysferry.com) with reception to follow at The Hotel."

Does that not say all that matters about a very special islander lady infinitely better than you or I could say it? I believe it does.

I believe that it also catches the soul and substance of the resilient island communities all along our rugged coasts down the centuries.  They might have been forced to emigrate in hard times, but their hearts remained at home and they came back, like this mighty lady, as often as they could.

And she, clearly, transformed the life of her island when she came back home each summer. She certainly went straight to paradise when she left us, and I hope and trust that the corner of eternity wherein she now dwells is scented by the sea, wrapped around by the whitest of surf lines, and very similar to the Bere Island where she was bred and born and never forgot. She earned all that for certain, and God is good.

It occurs to me in closing that not alone was Eileen the informally uncrowned Queen of Bere Island each time she came back in her summers but, also it could be said, an Irish princess in the Brooklyn where she cared warmly for the elderly for many years.

One of the highest titles in the English royal family is held by the Duchess of Windsor.  In her final years of caring for all life, from chickens to dogs and cats and grandchildren and neighbors, and the occasional stray horse, in the California namesake community, would she not also have earned the honorary title as the Duchess of Windsor?

God rest her warmly. She was special indeed.