The Greek’s situation goes from bad to worse

No vote in referendum was a disastrous mistake. 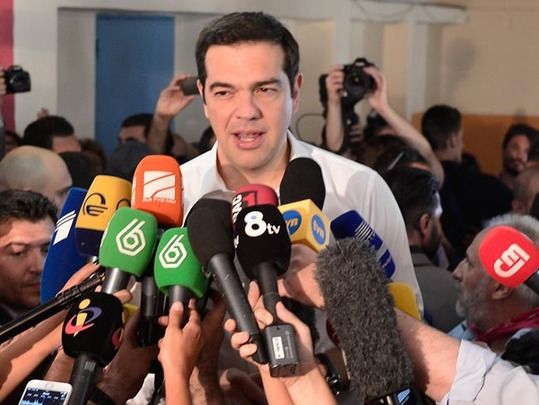 The euphoria in Athens on Sunday night after the decisive no vote in the referendum on the EU bailout terms was extraordinary. The flag-waving, cheering crowds were ecstatic, celebrating what they regarded as a great victory against austerity.

But of course it's not a victory. It's a disastrous mistake.

They won't be quite so ecstatic when the ATMs start running out of cash. Depending on the patience of the European Central Bank and on what the leaders of the other EU countries decide, that could be any time now.

The absurdity of the situation is beyond belief. Most of us understand that you don't bite the hand that feeds you.

Yet that is exactly what the Greeks have done with this no vote. It's not only ungrateful, it's a slap in the face to the 18 other countries in the Eurozone, Ireland included, who have been providing billions and billions in loans to Greece.

There's been a great deal of talk in Greece about democracy and the will of the people, mainly from the new left wing Greek government. But what about the will of the taxpayers in the rest of Europe who have been pouring money into Greece over the last few years and have seen little or no reform there despite all the promises?

Recent opinion polls in Germany and other countries that are paying to keep Greece afloat indicate that most people in Europe are fed up with the Greeks, and if a referendum were held across the EU there would be little support for giving them even more money. Presumably that is not the kind of democracy that Greek Prime Minister Alexis Tsipras would like. When he talks about a victory for democracy he is ignoring the views of people in the rest of Europe who are paying the bills for him.

It's important to remember that what we are talking about here is real money that has to be earned by taxpayers in the rest of Europe before it can be handed over to Greece. It doesn't grow on some magical money tree that Alexis Tsipras, his Syriza party, and their Irish buddies in Sinn Fein seem to think exists somewhere. The earlier loans that Greece got came from financial institutions, but almost all the recent money that has kept them going has come from EU taxpayers through EU institutions.

This is glossed over by Tspiras, a former student leader and young communist, who still thinks in the same radical, idealistic, naive way that students everywhere do when Mom and Pop are paying for everything.

The fact is that since Tspiras and Syriza took over the government in Greece in January this year they have behaved like kids. They have been immature and irresponsible, and their antics and posturing destroyed the balanced budget and economic growth that had been so painfully achieved over the past year by the previous government.

To get elected they made promises they could not keep. They promised they would reduce austerity -- in other words the cutbacks in state spending in recent years.

They restored benefits and rehired many of the state workers who had lost their jobs. Most importantly, they did little to keep spending in line with tax revenue and continue badly needed reform of the Greek economy.

Making promises is easy. Carrying them out when you have to pay for so much with borrowed money is more difficult.

And it becomes impossible when those lending you the money lose confidence and turn off the tap. Which is exactly what has happened between the rest of the EU and Greece. Only now is Tsipras waking up to the reality that no one in Europe thinks they owe Greece a free lunch.

For an economy of its size, the amount that Greece owes is enormous, somewhere between €300 and €400 billion, depending on how you count it. According to IMF calculations last week, Greece needs another €50 billion just to keep going at its current level over the next three years.

Because it has defaulted it's not going to get that from the IMF. If it were to come from the EU, Ireland's share would be around €1 billion and I'm still waiting to hear how Sinn Fein, which supports Syriza, would find that money in the Irish budget. Just what do they think we should cut to give Greece the money?

What's going on in Greece is being followed closely in Ireland for another important reason. We also got ourselves heavily into debt and had to be rescued with a bailout.

And like the Greeks, Irish people were -- and still are -- angry about the weight of austerity that was imposed on us by the EU and the IMF as part of our bailout. But the similarities don't really extend beyond that since there is a huge difference in degree between the situation in the two countries.

The state finances in Ireland were never as bad as in Greece, which is why we were able to exit the bailout so quickly. It is also why, despite all the complaining that went on here, the austerity program imposed on us was never as severe as the cuts that have been forced on Greece.

And Ireland, of course, is a far more developed economy than Greece which has little more than tourism to rely on. In contrast we have all the foreign direct investment here, IT and pharmaceutical companies, software start-ups, world class agriculture and so on. So as a result we were able to recover quickly after the bust here, while Greece has remained stuck in recession with high unemployment.

But the fact remains that we have been left with a huge debt burden from the bailout which continues to suck billions out of the country in interest payments every year. This is money that we would much rather spend on education, hospitals and so on.

And that is why we are interested in the possibility that Greece might get a substantial write down in the enormous debt they owe as part of whatever rescue plan might be cooked up even at this late stage. If that were to happen, our government would immediately be criticized for not having got a similar deal for us. The fact is that although we got some degree of debt restructuring -- longer repayment periods and lower interest rates -- there was no debt forgiveness for Ireland.

We have much longer to pay back what we owe. The maturity date on some of our debt is now 2050 and beyond. But we are committed to paying it all back eventually.

So if the Greeks get substantial debt forgiveness, and we don't, Irish people are not going to be happy. Which may explain why the Irish government has been taking a hard line on Greece at EU level in the past few weeks, saying there can be no debt write-off. Apart from anything else, Greece already owes us €350 million, our ministers have been reminding us.

Taoiseach (Prime Minister) Enda Kenny reiterated this line in the past few days, saying that what Greece should be doing is looking for debt restructuring (like we did) instead of a debt writedown which is unlikely to happen because of the implications it would have for other countries within the EU and for the financial structures in the euro area. They should push for longer maturity dates and lower interest rates, as we did successfully, the taoiseach said.

The problem with this, however, is that the Greeks have already got substantial restructuring, and it has reduced the current servicing costs of its debt mountain to very low levels. Even with this they are struggling to keep going and, as we have seen, are unable to meet repayments when tranches of debt mature and are unable to roll over these debts with new borrowing because confidence in Greece is at such a low level. That's why one IMF official said two week ago that there is no alternative to a debt writedown for Greece.

Looking at Greece from an Irish perspective, there is a feeling of there but for the grace of God we might have gone. We had to get a bailout, but at least there was no danger the ATMs here were going to run out of cash or the banks close.

And that was largely because we did what was required of us under the bailout program, and as a result we kept getting the bailout money as we needed it until we got the economy going again. Looking at Greece now has made a lot of people here think that maybe going into the bailout and sticking with it was not such a bad thing for Ireland after all, given where we are now.

In contrast Greece, has huge problems. Corruption, tax dodging and the black economy are a large part of life there and only minor progress has been made in changing this.

On top of that, efficiency in the small industrial sector in Greece is poor, with productivity way behind that in Eastern Europe, for example. They have a very large number of people on the state payroll for a country of its size and their performance levels are poor. And as we all know because of the row over pensions, they have a very extensive welfare system which they cannot afford.

Of course even developed countries have people who dodge tax and operate in the black economy. But instead of it being five or 10 percent, in Greece it's 25 or 30 percent of the economy.

Their welfare bill gobbles up nearly 40 percent of the annual budget. Officialdom at local level is rife with corruption, so that bribery is required to get anything done. Dodging tax is a national pastime, with little fear of being caught.

Despite all its talk Syriza had done little to correct these problems since it took over in January. Instead they have tried to spend their way out of trouble and concentrated on arguing with the EU about more bailout funds.

The last government had managed to get a small surplus in the budget, before interest payments, and the economy was growing by a couple of points last year. But Syriza's lack of focus has undermined that progress in just six months.

Last week's drama in Greece happened to coincide with the appearance here of former minister for finance and then taoiseach Brian Cowen and his predecessor as minister for finance Charlie McCreevy before the Banking Inquiry here, the two men most often blamed for allowing Ireland's boom and bust to happen. The disastrous situation in Greece made them both seem less culpable than otherwise might have been the case, and neither was apologetic for their time in government.

But we will be looking at their evidence in more detail here in the coming weeks.

Read more: Bravo to Greece and Nein to German greed