Dublin teen edges closer to league debut and may even get a call from Republic of Ireland gaffer Mick McCarthy. 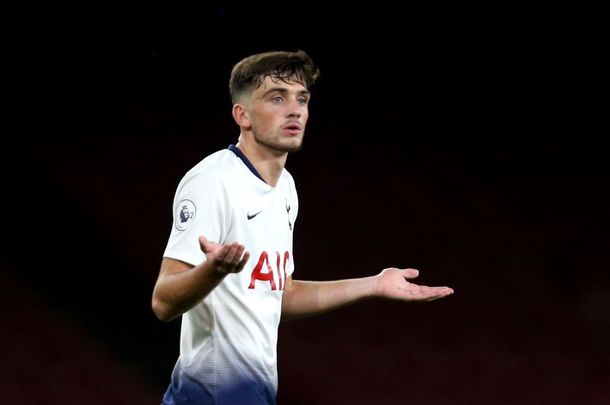 Mick McCarthy won’t be afraid to call Troy Parrott into his Ireland squad ahead of the European Championship qualifier against Switzerland on September 5 and the friendly against Bulgaria five days later, both in Dublin, as the Dublin teenager continues to make waves at Premier League Spurs.

Tottenham boss Mauricio Pochettino has used Parrott a lot in pre-season as the young striker edges ever closer to a league debut with his club and an international debut with his country.

The 17-year-old played against Juventus and Manchester United last week alone and McCarthy, speaking at the FAI’s Festival of Football in Meath, is keeping watch on the hottest Irish prospect of his generation.

“Troy got a start against Juventus, against a top Italian side, which was great for him. He is young and we have to remember that but this is good news for the player and for Ireland,” said McCarthy.

“I have a history of playing younger players. Robbie Keane played for me when he was 18. Don’t for one minute think I’m comparing Troy Parrott to Robbie Keane, but if he has half as good a career as Robbie had, he’ll be a very good player.

“Since I took the job, I don’t think he has played a game I’ve been able to watch in person. The bits I’ve seen have been on the analysis. Robbie has seen a bit of him, clearly, our underage coaches have too and if Mauricio Pochettino is playing him in Spurs’ first-team then that’s a ringing endorsement.

“If he is playing in the first game of the season, if he is starting and playing for Spurs, he’ll have to be a shoo-in for the squad. He’s got to be playing to play for Ireland.

“My concern is Switzerland but if Troy Parrott is in and around the Spurs first team, he has every chance of being involved. If he is playing in the Tottenham team, I’ll use him for the first-team squad.”

McCarthy has still to hear from Leeds United striker Patrick Bamford about his Irish intentions and won’t be pushing the issue any further, but he is prepared to look at Ireland qualified Liam Kelly after his move from Reading to Feyenoord in Holland.

“If he wants to play for me, he’s got my number, he can send me a message. I have done all the chasing as far as I am concerned,” said McCarthy when asked about Bamford.

New Portsmouth signing Marcus Harness has already expressed his interest in an Ireland call-up to McCarthy.

“Terry Connor and myself both saw Marcus play with Burton last season and we will have him watched again when the season kicks off next weekend and see how he gets on,” McCarthy told FAI.ie

“He has told us he wants to play for Ireland and we will follow through on that now and help him sort the paperwork from his side.”