Saoirse Ronan wants to open an honest discussion on sex

Irish star hopes On Chesil Beach will initiate honest conversations about sex - "not have it be a taboo thing or something they should be ashamed of." 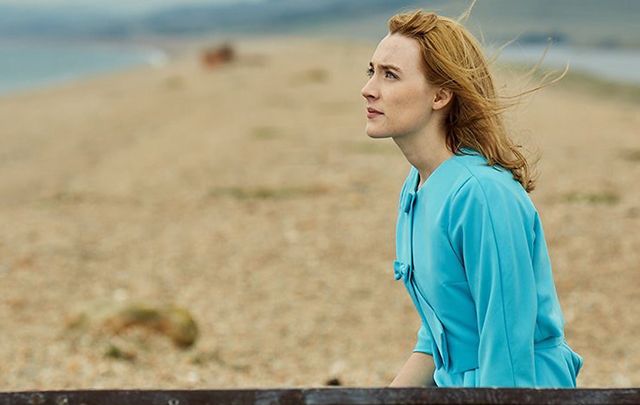 Saoirse Ronan in On Chesil Beach.

Saoirse Ronan is one busy actress.  She’s filming Mary, Queen of Scots while promoting two of her upcoming films, Lady Bird which opens here next month, and On Chesil Beach which bowed at the London Film Festival on Sunday.

Saoirse was in the British capital to promote the film, which won superb reviews at the Toronto International Film Festival last month and also a U.S. distributor, Bleecker Street, which will open the film sometime next year.  It’s based on the best-selling novella by British writer Ian McEwan, and according to Amazon it “brilliantly illuminates the collision of sexual longing, deep-seated fears, and romantic fantasy on a young couple’s wedding night.”

Saoirse, 23, looked lovely on the London red carpet, and told reporters that she hopes the film will initiate honest conversations about sex. “I hope this film gets people talking about sex and not have it be a taboo thing or something they should be ashamed of, so they can let it be something that can be shared between two people and be an honest thing,” she said.

“I think that is really healthy and I do feel people are starting to get to that stage. I do feel, and I don’t know if it’s because I work in films and am around people who are more artistic and more open with their emotions, but I do feel like this generation of men, and women but particularly men, have been allowed to let down that faux-masculinity a little bit, that idea of being macho.”

Saoirse showed up solo to the London screening. If she’s got a significant other in her life she does a great job of keeping the person under wraps…and good for her.