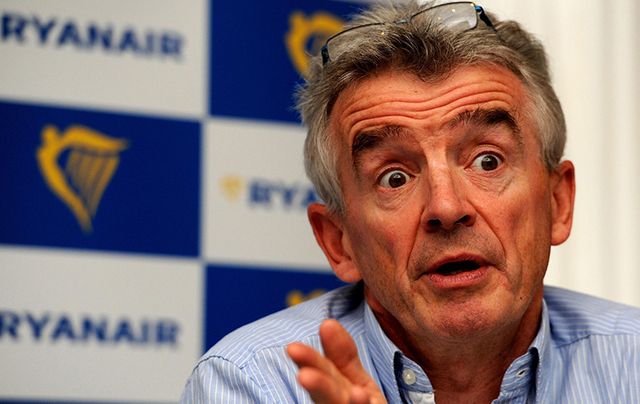 A contrite Michael O’Leary has apologized to 300,000 passengers directly affected by a series of flight cancellations, and to another 18 million who have seen a cloud of uncertainty hover over their travel plans.

O’Leary, who described the situation as “a mess,” admitted he faces a €25 million loss in profits and compensation for cancellations to his Ryanair flights schedule which will run to the end of October and started unannounced last Friday.

Ryanair has offered to pay bonuses of up to €12,000 to pilots who agree to give up annual leave entitlements to plug gaps in the schedule. However, the pilots would not receive the bonuses until October of next year.

Up to 50 flights a day are being cancelled out of a total 2,500 flights a day to accommodate a backlog of flight crew leave that must be taken before the end of the year.

O’Leary said this was only two percent of Ryanair flights, but over the weekend passengers didn’t know until just hours beforehand what flights were being cancelled, and thousands were stranded abroad on the continent without returns to Dublin and Britain.

The Irish Airline Pilots Association (IALPA) claimed 700 pilots had left Ryanair in its latest financial year, but O’Leary, while admitting that other airlines are taking some of his pilots, denied a staff shortage.

He said the problems were not the result of pilots quitting but was “because we’re giving pilots lots of holidays over the next four months.”

IALPA says that for years Ireland and the Irish Aviation Authority interpreted the European Union rules governing maximum flying hours in a way that was different from other EU regulators.  That means many Ryanair pilots used up most of their flying hours during the busy summer.

However, Irish airlines now have to adopt the rules in the same way as their EU counterparts. This is affecting the airline’s pilot rostering operation, but it has been known that the change is coming for some time.

IALPA said, “It seems clear that Ryanair has failed to plan properly for the implementation of the regulations.”

The Commission for Aviation Regulation, which oversees air passenger rights, said it was expecting a high volume of claims for compensation from travelers affected by the cancellations.

It was Monday night before Ryanair was able to announce in detail what flights would be cancelled over six weeks.

O’Leary said 75 percent of all impacted passengers would be accommodated on flights leaving on the same day as their cancelled flights.  He said that reputational damage had been done to the company and committed to “trying to do better.”

He estimated that it would cost the company around €25 million, about €5 million in profits over the next six weeks and up to €20 million in compensation. He agreed that the cancellations and the way in which the sudden scheme was announced was “clearly a mess.”

“I don’t think my head should roll, I need to stay here and fix this,” O’Leary added.

Ryanair has lost as much as €2.1 billion of its market value as the carrier’s move to cancel flights added to the impact of news last week of a potentially costly European court ruling.