"Lifelong campaign of revenge on the establishment that rejected him... We are merely the hostages of his fortune." 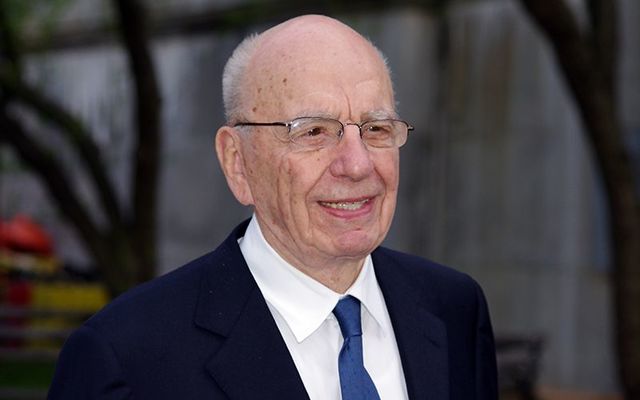 We don't talk enough about the corrosive effect that media mogul Rupert Murdoch's international empire has had on our democracies over the last three decades. We still don't debate the wisdom of allowing one man to wield so much political influence on the world's stage for so long.

Popular wisdom suggests that his influence is waning and that he's coming to the end of his very long reign as the man who sets the agenda from Fleet Street to Fox News, but his recent haul of political successes actually suggests he's at the height of his powers.

Murdoch, through his media empire in the U.K., the U.S. and Australia, has managed to weaponize the genuine grievances of struggling white people, marshaling them into a formidable and angry voting block, then directing them time and again to vote against their own interests for his preferred candidates.

In the 1980s Murdoch first took control of most of Australia and the U.K.'s press, leading to a concentration of newspaper ownership unknown anywhere in the developed world beyond the party-controlled papers of the former Communist bloc.

That lamentable monopoly led to a concerted effort by his newspapers to pursue his agenda, creating a sort of divine wind that crossed continents and helped set the international political agenda, even hand picking its heralds.

In America, his Fox News became the undisputed mouthpiece of the Republican Party and appeasing it or defying it has become critical to the party’s fortunes, consolidating or ending the careers of the GOP’s rising stars.

Recall now how Fox News’s color-coded and non-sensical “terror alerts” shielded George W. Bush from criticism after the 9/11 attacks. Recall that whenever uncomfortable questions about the quality of his leadership surfaced, so too did another color-coded freak-out-alert to quickly change the subject. Don't look at that, look at this, it said.

Fox News relentlessly banged the war drums in the run up to the Iraq war, creating such a hostile environment for principled naysayers that to even question the wisdom of attacking a nation that had not attacked us could see whoever dared to ask it subjected to a patriotism test.

Worse, Fox News gave succor to the rise and spread of the Koch brothers and their Tea Party movement, the most corrosive political development in America since the Joseph McCarthy era, carefully crafted to wage an endless, unhinged and often racist war on President Barack Obama.

Murdoch helped weaponize your grandparents with his nonstop news channel, turning them into red faced enrages from Florida to Wisconsin. He played a confidence trick that turned hard working white people into anti-science, anti-immigrant, anti-anything that didn't look and sound the same as they did, tearing Congress and the fabric of the nation apart in the process. We have not recovered.

This week we hear that Murdoch is in talks to sell much of his media empire to Disney. Whether he eventually does or not, we are already living in the world his empire helped create.

In the U.K. Murdoch's media empire was overwhelmingly in favor of Brexit, of course. Could that have had something to do with the EU’s tendency to break up corporate monopolies? If he tried to consolidate the continent’s own media channels they could have easily quashed him. So he got behind fortress Britain.

Asked by Anthony Hilton at The Evening Standard why he was so anti-EU Murdoch famously replies, “That's easy. When I go into Downing Street they do what I say; when I go to Brussels they take no notice.”

Here in the United States this week it's the first anniversary of Donald Trump's election. Currently he is the most historically unpopular president since records began.

But when it mattered, in the run up to his election, Murdoch's empire helped sell Trump to the nation as a populist insurgent, an untouchable billionaire who still somehow magically understood the fears and anger of the white working class who had seen themselves left behind by industry, popular culture and economic opportunity and who wanted to mount a protest about it.

If inchoate resentment is the force that explained Trump's rise, it is also the force that powered Brexit, and it is the message relentlessly broadcast by Fox News. It is a anger machine that assures viewers that they are the real victims of every social upheaval, every terror attack, every political change and every economic downturn. Then it sends them to the polls to line the pockets of plutocrats as they empty out their own.

Playing to people's prejudices to manipulate them into doing what you want is as old as Caesar.  That's why we have such a staggering number of modern Roman emperors deciding our fates on the world stage now.

Long ago at Oxford University, Murdoch was cruelly dismissed by his much posher British peers for having humble origins and a foreign accent. His lifelong campaign of revenge on the establishment that rejected him is still playing out across the globe. We are merely the hostages of his fortune.