The recently constructed two-story Rockland GAA clubhouse which will formally open with a grand three day celebration this weekend. 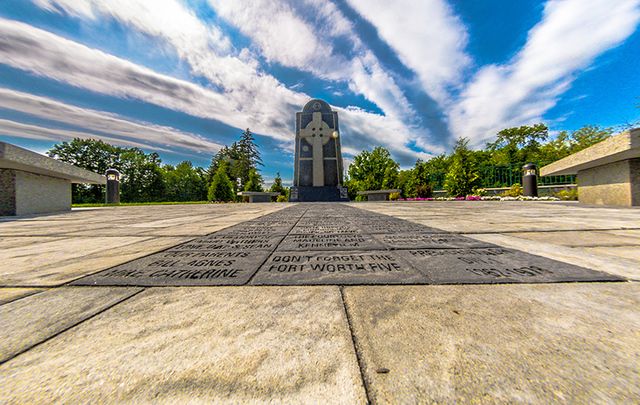 The Famine Memorial at the Rockland GAA complex. Chris Clarke

A refuge from the summer heat, Mick Healy sits down in the air conditioned multi-purpose room in the downstairs section of the recently constructed two-story Rockland GAA clubhouse which will formally open with a grand three day celebration this weekend.

“In 2008, after we redeveloped the field, we started to hold development meetings and to start putting down on paper our master plan,” Healy, who co-chaired the development committee, told the Irish Voice.

When Rockland first started to put together ideas for the clubhouse, Healy says there were some grand plans.

“The initial drawings had us constructing this massive 25,000 square foot facility with an indoor track, an elevator, and even a full length basketball court,” he offered.

Healy says that the club had to cut back on some of its original plans, but says the next round of ideas is where the whole venture came together. “We went back to the drawing board and we got an architect from Dublin involved named George Boyle. The second set of drawings is what we ended up sticking with throughout the project.”

For the Rockland GAA, the next steps would be to assign tasks to many of its members. These tasks varied from structural steel to painting, and it took a team of 20 just to start the ball rolling. Brian Pearson was first approached to be the point person as far as being the eyes and ears overseeing the day to day activity.

“Brian was a person we thought would be perfect for the role. He had a construction background and had recently retired from Structure Tone. He is someone I personally had always gotten along with and we figured he needed something to do,” says Healy, laughing.

“Little did he know what he was getting himself into two years later.”

Read more: Rockland - The little GAA club that could

Just over two years later, the clubhouse stands tall. On the upper level is a gathering spot with a full length bar that spreads out into the canopied pavilion.

The pavilion, an idea that has kept since the beginning, is the crown jewel of this crowning achievement.  It’s a place where visitors can oversee games on both the upper and lower pitches or simply hang out with friends. Bathrooms and an immaculate full scale kitchen also inhabit the upstairs portion.

Going outside and to the right is the recently relocated Irish Famine Memorial. Originally placed at the far edge of the pitch, the memorial has been given a beautiful new home with a fantastic stone path and marble top benches.

Down the exterior stairs and to the right are two locker rooms for players to dress for training and games. Equipped with benches and showers, the locker rooms are a much needed necessity for any player “togging out.”

Along the great stone path at the back of the clubhouse is the multi-purpose room – just below the illuminated green “Rockland GAA” sign welcoming all visitors to this haven of Irish culture. The Rockland GAA clubhouse is a special place and a building that the club hopes will inspire the next generation of kids and families coming through the club.

This weekend will have games, including the Dennis McHugh Memorial U8 Tournament, the Rockland Intermediate Team vs. Clogher Eire Og who are visiting from Tyrone, and a very special GAA all-star game with some legendary names like Peter Canavan, Paul Galvin, Tomas O’Se, Graham Geraghty, Padraic Joyce and many more. The clubhouse will officially be opened during a special ribbon cutting ceremony involving the president of the GAA, Aogán Ó Fearghaíl. Throughout the weekend, musical guests will take the stage such as the Narrowbacks, Whistlin’ Donkeys, Girsa and more. Rockland will also be home to the FDNY vs. NYPD Gaelic football match on Saturday.