Last month Jonathan was pictured in Venice shooting The Aspern Papers but following a family tragedy Irish star seems to have relapsed. 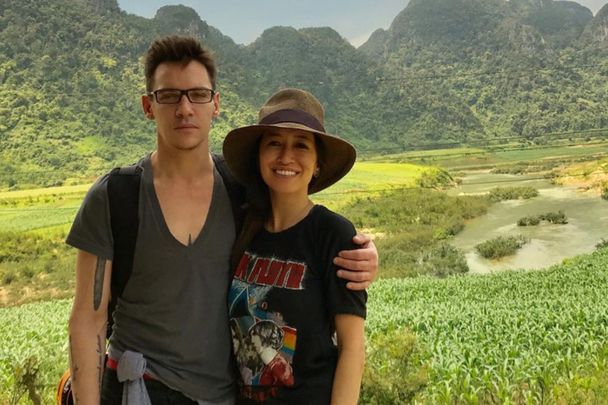 Poor Jonathan Rhys Meyers. The Irish actor’s battle with alcoholism burst into open view again on Saturday when he was at Dublin Airport staggering around the departure terminal while waiting for a flight to Vancouver.  Security guards escorted him away, and it’s believed he was denied boarding.

Turns out that JRM’s wife Mara Lane suffered a miscarriage and he’s been broken up about it.  So that likely explains why he turned to the bottle for solace.

Mara posted a lengthy message on her Instagram about their distress.  The baby would have been their second; son Wolf was born last December.

To the showering of love received, thank you from bottom of our hearts. I am so humbled and got teary-eyed several times at how beautiful humans can be and so sad but hopeful with the stories shared of depression and miscarriage and addictions. Thank you for sharing your soul and stories back, as this helps us feel that we are not alone. Anyone who knows me personally knows I would normally never share such personal sadness (only because in my head, I would not want to burden others and because I trust that in time God will heal me) but I was happy to come to my husband's defense. I could not sit back and see him attacked by Darkness publicly during such a tender time. Thank you for coming to ours. Please continue to always write or comment about your days no matter what I share as when I see it I will return the love back someway or it will be read by someone else who can too. I so wish that I could support you on all your walks and sad days so hopefully the posts I share will make you laugh or lighten your days or make you smile/brighten them somehow. This is not a highlights nor lowlights reel, but simply an in-the-middle to keep in contact. I was very vulnerable in my last post as well as being at an all-time low and on such days I sometimes will feel the need for support, so thank you for being so kind to me and being a safe place. We will try to be more transparent on our journey as I see it may be helpful for others as well as ourselves. We don’t have to carry the weight of the world ourselves. We can help lift one another up. I have been given peace and Baby Willow is now planted in the tree in front of our home that has weeping long branches and leaves so we can brush our faces in soft leaves in passing or we can see the baby dance with the wind in the branches as they sway. It is helping me process the situation … as Nature does. Thank you again Dr Stu for getting us through that as watching a sonogram not have a heartbeat is very surreal and beyond sad. Thank you Father God for supernatural peace. May you afford those who seek you the same peace and may we grow as humans and have more compassion for all humanity.


That’s too bad. Only last month Jonathan was pictured in Venice shooting The Aspern Papers with Vanessa Redgrave and Joely Richardson. Now, Mara reports, he is “safe and with his sober living companion and bodyguard to get into a detox closer to home since he was denied hospital help twice in Ireland because of an already two month wait period.”

Someone at the airport photographed him being escorted to a seat by security guards, and of course sold the pics to a tabloid.  Mara questioned why a stranger felt the need to humiliate someone who clearly needed assistance more than anything.

“I feel that whomever took photos of my husband was slightly in the wrong and was concerned for the wrong reasons but ... it's ok. It's ok. Maybe you have/had a family to feed and need/needed money? I don't know. We forgive you,” she wrote.

“He looked like someone who didn’t have a clue where he was. He was completely out of it. Other passengers were concerned to see him in such a way just after 10 a.m.,” one passenger told the Daily Mirror.