Cahir O'Doherty talks to the show's breakout Irish star Moe Dunford, alongside newcomer Jonathan Rhys Meyers as the two men prepare for all out war. 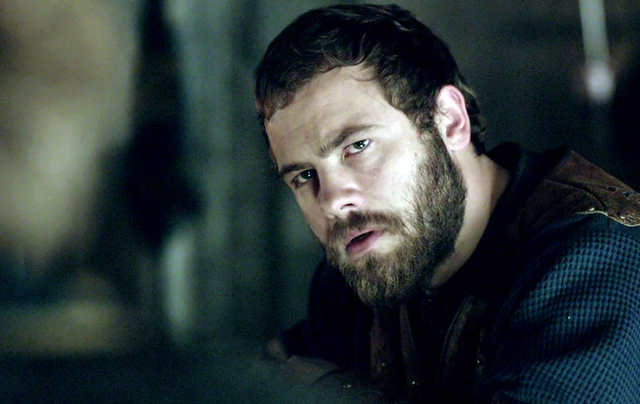 The season five premiere of the History Channel smash "Vikings" begins on Wednesday, November 29 in a two-hour season opener. Filmed in Ireland, starring Irish actors and making liberal use of the wild Irish coastlines' natural beauty, "Vikings" is now the TV twin of "Game of Thrones" in both international ratings and exposure. Cahir O'Doherty talks to the show's breakout Irish star Moe Dunford, who plays King Aethelwulf, lynchpin of the new season alongside newcomer Jonathan Rhys Meyers, as the two men prepare for all out war.

When he was a schoolboy in Co. Waterford, an Irish teacher told Moe Dunford, 29, that acting was a mug's game, a complete non-starter. Later, in the kind of sweet revenge move that the poet Patrick Kavanagh would have relished, Dunford based the teacher he played in John Butler's comic coming of age drama "Handsome Devil" on him and on other memorable killjoys like him.

It turns out that Dunford’s old teacher was flat-out wrong about acting and the opportunities offered by the Irish film and entertainment world because film and television production in Ireland is enjoying unprecedented success with epics like "Vikings" and "Game of Thrones" becoming the latest arrows in Ireland's impressive international film production quiver.

This Wednesday on the History Channel Dunford will reprise his role as the Saxon king Aethelwulf in season five of "Vikings," but this time he will return as king (and believe it or not as the father to two young Irish actors, one of whom in real life is just three years his junior).

Dunford burst onto film screens for the first time in 2014 with an unforgettable performance in Terry McMahon's "Patrick's Day," in which he played a mentally ill young man who begins an affair with a suicidal flight attendant. Then impressive turns in films like "Handsome Devil" and "Gridlock" saw him quickly cast in director Lance Daly's eagerly anticipated Great Hunger drama "Black 47."

But let's start with "Vikings."  It's already a TV success story to rival "Thrones." How's the mood on set?

“It's gone from strength to strength,” Dunford tells our sister publication, the Irish Voice. “When I came on board in season two it climbed from nine episodes a season to 20. We've clocked up about 80 episodes now and it's not showing any signs of stopping. It's giving us the chance to work with a lot of established and up and coming Irish actors. This has been my favorite season yet to work on.”

Tour operators have taken note. Tourists have been arriving by the busload into Wicklow where the series is filmed for tours of the show’s locations (and the same thing is happening up north with "Game of Thrones"). Previous big films like "Michael Collins" and "Excalibur" and "Braveheart," all filmed nearby, are actually signposted.

“This season on 'Vikings' is different because I am no longer playing the manipulated son. I'm the king this season so I look at things differently,” he said.

“I have two young sons (played by Irish actors Ferdia Walsh Peelo, 18, from 'Sing Street' and a Darren Cahill, 25, from 'Red Rock,' going from Garda killer to Nordic royalty). I had a lot of fun this season with the Irish actors.”

Although the show is filmed in Ireland and features Irish actors, the story often steers clear of the Emerald Isle. There's a historical reason for that.

“In Ireland the vikings found that there were so many kings disputing amongst themselves they decided that they weren't going to get involved with these lunatics,” Dunford laughs.

Isn't it a bit mad that he's playing the father of an actor three years younger than him?

“It doesn't say very much for me, I know,” he laughs. “Let's just say without his beard Darren looks very young. But they age us up pretty quickly in the show, you know?”

To get an idea of the small world that Irish screen acting often is, Dunford's first job when he got out of the Gaiety School of Acting was in the Irish-produced "The Tudors," which ran on Showtime from 2007-2010.

“I got about a week's work in it. I was playing a soldier and Jonathan Rhys Meyers was the king. The roles are reversed now, where I am playing the king now and he's playing a devoted Saxon holy warrior on 'Vikings,'” Dunford says.

“He's a brand new addition to the season with a very exciting storyline coming up and I've of my scenes with him.”

One of Dunford's proudest moments on the show was working with Rhys Meyers, he confesses.

“He was incredibly professional and gracious and kind, particularly when it came to the younger actors. Also just as an observer he's a gifted individual and I was glad I got to do a whole season with him. He added so much dynamism to the part.”

Looking around one day on set of "Vikings," Dunford noticed that himself, Rhys Meyers, actor Paul Reid, and Ferdia and Darren were are all Irishmen playing Englishmen. “It's like we're spies breaking through the ranks, you know? It was great.”

This week Dunford is working on a new feature film called "The Dig" in Co. Antrim, his first lead role since "Patrick's Day."

“I have six or seven films coming out next year but this one is my first time working day in day out up North. It's about a murderer who returns home to help the victim’s father find closure and also to find the body.”

Each day he is spending on top of a mountain working 12-hour days with a cast that includes Emily Taaffe ("Beast," "Paula"), Francis Magee ("Jimmy’s Hall," "Rogue One") and Lorcan Cranitch ("The Legend of Longwood," "Love, Rosie").

“There's just something really exciting about the script,” he reveals. “We're working hard hours but I've got a feeling it could be something special.”

This year has been good for the young Irish actor. “I've worked on 'Striking Out,' the TV drama series with Amy Huberman, I've got a black comedy coming out next year called 'Dark Lies the Island' with actors Pat Shortt and Peter Coonan. And two other new films include 'The Lodger' set in 1920s rural Ireland and 'Black 47.'”

So despite what his one of his old teachers said, Dunford is making an acting career work. In fact, he's one of the busiest Irish actors currently working.

“I love what I do and I love storytelling,” he laughs. “At the end of the day I like to keep things simple when I'm not working, spending time with my family when I have my time off, otherwise working with as many different directors as possible.”

Is it glamorous? “Glamorous? I'm not doing it for the glamour,” he laughs. “This new film I'm doing is probably the toughest job I've ever done. It's so physically demanding. But when the script is this good...”