Cead Mile Failte, as most of ye know, is the Gaelic for the ritual hundred thousand welcomes for which we are famed globally. 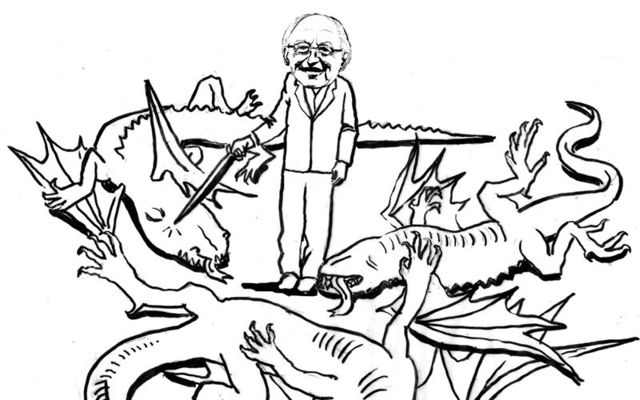 Cead Mile Failte, as most of ye know, is the Gaelic for the ritual hundred thousand welcomes for which we are famed globally.

So Cead Mile Failte from this old heart and soul for all of you entering this space on a bank holiday weekend over here when cold winter moves in again, the leaves and temperatures dramatically fall and, paradoxically, many are already relishing the advent of the Christmas season and the related craic which begins earlier and earlier every year.

The candled pumpkins of Halloween are still grinning brightly in the darker nights as the retailers’ Christmas season fires its first salvoes in early November frosts, as the merchants have to do nowadays.

Putting all that stuff to the outside rings of reality for the moment, I just have to open with a bit of craic with the modern story of Daniel in the Dragons’ Den. It’s not the original lion’s den yarn ye have been taught about since childhood at all, this yarn, but the modern mutation.

Please read on with a smile on your faces. That will make you feel better no matter what political persuasion you have been tied to.

You see, the whole world knows by now that our President Michael D. Higgins has been re-elected for another seven-year term at the ripe age of 77 spry years. Not everybody, however, probably including you, dear reader, knows that the “D” in the midst of our president’s surname stands for the name Daniel.

And in case you have fallen behind the headline news from the Emerald Isle recently, I am proud to factually report that, though surrounded by a snarling quartet of genuine dragons (from our version of that reality TV series), our Daniel effortlessly devoured them all when the votes were tallied.

It’s the sort of thing that really only is dramatized in Disney productions, but here it happened in real Irish life.  Physically slight Daniel, by an overwhelming margin of electoral victory, effortlessly dealt with all the dragons seeking to replace him for the next seven years in Ireland’s top post of power. He blew them away by a huge margin.

He slew more dragons than the original Daniel sundered apart in that ancient lion’s den. It could only happen in Ireland for sure.

It’s Halloween stuff on the run-up to Christmas. But it’s no fairy tale at all, just hard electoral fact.

Regular residents of this space might recall that I earnestly requested Daniel to run for office again this year despite the fact he had earlier said he would only serve for one term. I clearly recall that our own beloved Caty, in her own inimitable style, produced an illustration of Michael Daniel Higgins for this page rising up like a phoenix from this mythical little island.

Maybe it was Caty’s image which catapulted Daniel into the pit of the dragons again. Who can tell?  The alchemy is that it happened, despite all the odds, and now the so-called dragons have all been slain by the resurgent Daniel and the Emerald Isle is overjoyed by the outcome.

I also remember saying that it is another quite surprising fact that Michael Daniel Higgins, raised in Clare, arrived in Galway as a teenager in 1960 already connected directly to more real raw power than he has ever been in command of since, despite his long political career before being elected our president.

Folk thought then that Cormac had truly lost the last of his mental marbles but, again, it was factual reportage. The little teenager came to Galway as a clerical officer with our national electricity board, known as the ESB, and it was his job and duty, day after day, to assist in the rural electrification of the remote sprawling corners of the Galway constituencies in which he would afterward fight many elections as a Labour candidate.

Galway was a Fianna Fail stronghold back then, and Daniel was defeated roundly time and again. But he always took his defeats on the chin and rose up to fight again when the next general election was called.  In that political cockpit back then, Daniel was the dragon they could never really kill off.

It is also a fact that this Daniel shrewdly deployed his ESB clerical salary, right from the beginning of his time in Galway, to fund his further education at third level and beyond. By the time I first interviewed him for The Irish Press a few decades later, he had, through his own academic efforts, become a respected lecturer in University College Galway and, in addition, a respected writer, poet, and commentator on the affairs of the day. One has to applaud that kind of drive and determination.

Again, in another media place, I confessed openly this week that, because I was a committed Fianna Fail member during his hard years, and though I knew the man well, I never once gave him even a lower preference vote on any ballot paper in any election. I was what they call a “plumper” for Fianna Fail back then (not since the era of Bertie Ahern though!) and I console myself nowadays with the truth that the Daniel Higgins we are speaking about here was also a member of Fianna Fail before he joined the Labour Party.

If a week is a long time in politics sure a few decades can and do make remarkable changes for many. Ask any of the slain millionaire dragons to explain that one.

I earnestly hope that our re-elected President Michael Daniel Higgins serves his country as nobly in his second term of office as he has served all Irishmen and women, both at home and abroad, during his principled and diligent first term.

In a new world, in a dramatically new and complex Irish republic, the former ESB clerical officer has glowed with a far brighter light during his term to date than any of the ESB bulbs he caused to be switched on in isolated Galway homes during the years when that was his daily duty.

And I hereby apologize again, publicly, for never having once voted for him during the decades when I lived in his Galway constituency. I have since seen the light!

Finally, on a brighter note, and referring back to the great yarn on these sites about Harriet the singing Irish donkey, I can equally factually report that I had the pleasure of enjoying a family party in Ennistymon in Co. Clare a few days ago.

During that interlude, being well catered for in the gentle Falls Hotel over the town, I can equally factually report that a major attraction for passing tourists in a pasture near the hotel was the presence of a paddock filled with plump little donkeys. They attracted the high interest of dozens of tourists as I observed the scene from a balcony above the action.

Sorry to be driven to report that all of them queued up for tidbits from the tourists. but none of them attempted to sing like the famous Harriet!

That’s all for now.