Memories of the River Shannon's ancient legends with a hairy hitchhiker

"I could Google to learn the real facts about the Pot, but I won't do that because hard facts are never as interesting as the folklore." 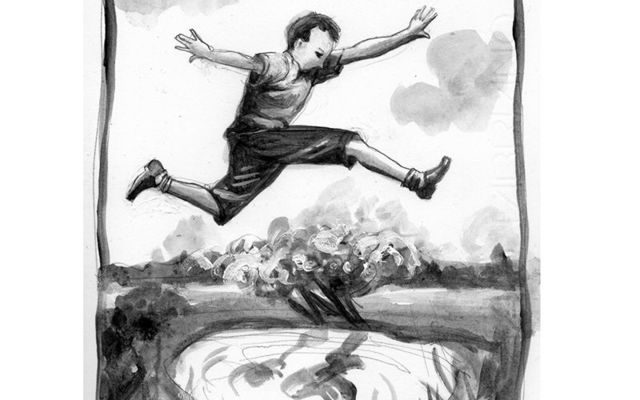 This hitchhiker, now with a beard and earrings, had jumped across the River Shannon umpteen times as a child. Caty Bartholomew

I'm driving serenely towards Limerick from home in Killaloe, and there on the side of the road in the September sunshine of a dry afternoon is a young bearded hitchhiker thumbing a seat.  I stopped at once as I always do nowadays for bearded young men who look like I looked myself in my twenties.

Most drivers, even today, and very much so decades ago, tend to briskly pass by bearded hitchhikers with long hair and jeans on remote country roads. My little dog Pepper was occupying the passenger's seat when the young man entered and took her on his lap.

We began an easy, lazy conversation. He was wearing some class of green earrings as well as the beard I noticed.

You would not get away with those at all back in the old days. A beard was bad enough, but a male wearing earrings would have been run out of the parish altogether.

It was a conservative Catholic era when my beard was youngly-black like his, and it was a lot easier to conform than to be even a little bit different from the rural norm.  Life is a wondrous journey.

We had not traveled 10 miles of the road before Pepper and I discovered we were in the pleasant company of a 22-year old man who had actually managed to jump across the mighty River Shannon umpteen times as a boy. And he survived and came to no harm at all from the experience.

I told him that he should be in the Guinness Book of Records and he laughed loudly at that.  We had great craic altogether as more details emerged.

You see, his name was Joshua and he was born in England to Irish parents. They returned to live in Ireland when he was a baby and they settled in Co. Cavan close to the border town of Blacklion, which I know well, and which many folks believe is in its natural geographic hinterland of Co. Leitrim.

Joshua was blessed by the fact that the townland in which his family settled was the townland situated just off the Blacklion to Glenfarne road in which is located the mythical reality of the Shannon Pot, the source of our longest and greatest river of all.

I saw it myself many years ago but only remembered how blackly inscrutable and mysterious the surface of it is until Joshua recalled how black it was when he stood beside it as an English-born boy. It was about 10 or 12 feet in diameter, he said, and there was a drain running out one end of it and that was the spot where an agile young lad like himself could take a running jump and afterward claim truthfully forever that he had jumped across the Shannon.

I remember all those years ago, that I had to inquire locally to discover the Pot's whereabouts but now. Joshua said it was on the tourist trail outside Blacklion, clearly signposted all the way, and there was even a parking and picnic area nearby and explanatory notices for all visitors.

We were heading in different directions on the day so parted with handshakes after only about 10 minutes. Pepper missed him and whined after him as I was thinking to myself about all the folklore I heard about the Pot whilst growing up in the next parish across the border in Fermanagh.

There was a lot of it and I am sure most of it was fanciful and inaccurate but it was mighty stuff to listen to around the childhood hearth.  Our folklore said strongly there was no bottom at all to the Shannon Pot, and that was why it was so black and never ran dry and so could feed the great river with all the water it needed, winter or summer.  (I checked later and learned that it is genuinely very deep indeed).

Shannon Pot or Legnashinna, near Cuilcagh Mountain in County Cavan.

And our hearthlore had it that it was a very sacred spot entirely in ancient times of Fionn and the Fianna and even before that.

There was a yarn that the river got its name from some poor princess called Sionnan who came there without the permission of her kingly father to steal away the fabled Salmon of Knowledge, but somehow angered the Celtic spirits who dwelt deeply within so that they caused the water to rise up and suck her in and drown her.

And there was another yarn that suggested that St. Patrick never managed to banish the last 11 Irish snakes, loathsome huge yokes 20 feet long with scarlet fangs, and they dwelt in the deeps of the Shannon Pot to this day.

I am certain that there are scientific studies today that I could Google to learn the real facts about the Pot, but I won't do that because hard facts are never as interesting as the folklore of childhood. Tread not upon my dreams.

You can Google to your heart's content if you so wish, but I am happy that a brief chance encounter with a pleasant young man who jumped across the Shannon garnished the trip that Pepper and I made to Nenagh the other afternoon.