Prince Harry and Meghan Markle, the Duke and Duchess of Sussex's royal pregnancy is announced and the world goes crazy! What gives?! 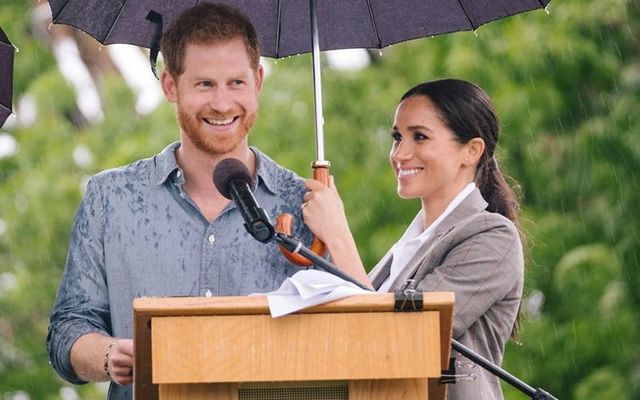 The Duke and Duchess of Sussex, Prince Harry and Meghan Markle, in Australia. Twitter / KensingtonRoyal

Prince Harry and Meghan Markle, the Duke and Duchess of Sussex's royal pregnancy is announced and the world goes crazy! What gives?!

An American woman in London married to a rich and famous Englishman has announced she is having a baby next year after the couple had been married five months. The news has gripped the world sending shock waves from Saudi to Sydney.

Over the next nine months, an astonishing miracle will occur as the baby grows in the womb and then makes its way down the birth canal to be born. Such excitement!

Read more: Could Meghan Markle and Prince Harry’s baby have an Irish name?

There is widespread relief that the American woman became preggers. Her husband is not known as the brightest gem in the jewel box and worries that he would be unable to learn how mammals’ mate properly have now been removed.

Despite the fact that this same birth journey is how everyone who ever lived is born we will be treated to a front-row seat, a womb with a view so to speak, as every imaginable expert will weigh in on how the birth process is going.

So, settle down and forget about climate change, Brexit or what Trump will do next for the next seven months or so.

Already we have been breathlessly informed that several key royal watchers, i.e. those with nothing better to do with their lives, had noticed the duchess had begun wearing slightly larger dress sizes which sleuths among them interpreted as a clear sign she was with child.

The couple, known as Meggy and Harry also use made-up names such as fellow royals Edward and Sophie do. They are the Earl and Countess of Wessex. Wessex has not actually existed as a place since the 10th Century.

Wessex was an Anglo-Saxon kingdom in the south of Great Britain, from 519 until England was unified by Athelstan in the early 10th century

So back to the Duke and Duchess who are having a baby while relatives with makeup names are sending congratulations.

There are other royal highnesses. There’s Kate Middleton Duchess of Cambridge who we learn is overjoyed--of course, she is... there is no threat to her - she has been dropping heirs to the crown like rabbits drop litters and there is no chance at all Megs and Harry’s offspring will someday rule.

BTW Kate and Megs do share something in common. Both are commoners as you can tell from their rank. Duchesses are usually commoners while princesses are descended from princes or kings, a very important difference as you can imagine.

Here’s a cute photo of The Duke and Duchess. #RoyalVisit pic.twitter.com/cKtLs0uhiL

The mother of Duchess Meg, Doria (also known as Duchess Mad Dog Doria--kidding) Ragland, is “very happy about this lovely news” and “looks forward to welcoming her first grandchild”.

Not a word from her father who was last seen haplessly trying to flog his story to the tabloids, so he has been edited out of the fairy tale,

As for her half-sister Samantha, she’s grabbing her moment of fame as only a spurned royal relative can do

She has landed a spot on Celebrity Big Brother.

"Why not?" she said when asked about the rumors, appearing to confirm the news.

"Life is about cashing in. You take opportunities as they arise and hopefully you enjoy the ride and make it as positive as you can. There's nothing wrong with it."

Theresa May welcomed the news, posting on Twitter: “My warmest congratulations to the Duke and Duchess of Sussex on the happy news they are expecting a baby in the Spring. Wishing them all the best.”

Clergy urged prayers for them in the months ahead.”

Prayers! Yes, there will be so much tension now. Can Meghan deliver? Can dim Harry handle the bright lights? Will there be an imaginary fiefdom for the new child to rule?

We hold our breath.

Are you surprised by the commotion caused by Prince Harry and Meghan Markle's announcement? Let us know in the comment section below.