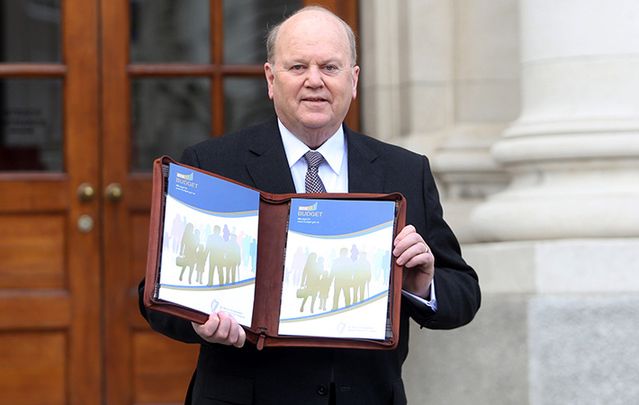 Finance Minister Michael Noonan and Public Expenditure and Reform Minister Brendan Howlin said the 2016 budget, which they announced on Tuesday, aims to keep recent economic recovery going in the centenary year of 1916.

The only added tax in a give-away pre-election budget is an extra 50 cent on cigarettes, bringing a packet of 20 up to an average of €10.50.

Bookies made Taoiseach Enda Kenny a red-hot1/6 favorite to again head the next government.

The top give-away is a massive reduction in Ireland’s most hated tax, the Universal Social Charge (USC), introduced as a temporary measure by the late Brian Lenihan in 2011. It’s a tax payable on gross income before any allowance for pension contributions. Noonan announced cuts to all three levels of the charge.

In what was clearly seen as an election promise, Noonan said if the government is re-elected they will abolish the USC charge completely.

Child benefit will increase by €5 to €140 per month for every child. There will be an introduction of statutory paternity leave of two weeks, to take effect in September 2016.

Senior citizens will get a €3 a week increase in their weekly pensions, the first increase since 2009.

In education, there will be 2,260 new additional teaching posts, including 600 new resource teachers. There will be an extra 610 special needs assistants.

On housing, the National Asset Management Agency (NAMA), established by the government in 2009 in response to the financial crisis and the deflation of the Irish property bubble, is to fund the construction of 20,000 new homes over the next four years, with 2,000 of the units to be given over to social housing.

The capital acquisitions tax threshold has been increased to €280,000 from the previous level of €225,000. Noonan said this is being done to entice more inward investment in Ireland and to entice emigrants home.

The capital gains tax is to drop from 33 percent to 20 percent, while an earned income tax credit of €550 will apply for those who are self-employed including entrepreneurs and farmers.

The motor tax system has been overhauled, and from now on five bands will apply compared to the previous regime of 20 different rates. These five bands will vary from €92 at the lowest level to an upper limit of €900, representing savings of over €4,000 for some hauliers who were paying in excess of €5,000.

A €50 million allocation was set aside for the 1916 centenary celebrations.

Noonan said the budget was designed to sustain the economic recovery and bring stability to families across the country.