Learn what life's like inside an eccentric Irish boarding school

Eccentric Irish boarding school and its gifted teachers give us new insights into the difficult business of growing up. Cahir O'Doherty looks at the new Irish film that won raves at Sundance. 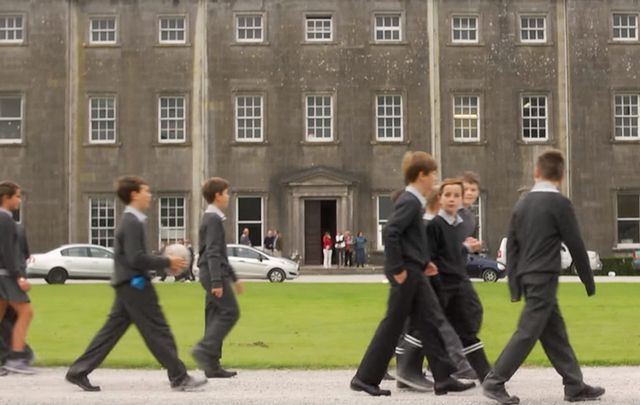 The inspiring life inside the private primary school in Ireland, in School Life.

Most people shiver at the thought of going back to school and some people even have occasional nightmares about it, but in director Neasa Ni Chianain’s brilliant new documentary School Life, an eccentric Irish boarding school and its gifted teachers give us new insights into the difficult business of growing up. Cahir O'Doherty looks at the new Irish film that won raves at Sundance.

The happiest days of your life? You have got to be kidding. For most Irish kids primary school is a decidedly fraught affair where we take our first halting steps toward the big, bad world.

But in School Life, a new Irish documentary, the guidance and encouragement of skilled and sympathetic teaching professionals can make all the difference between growing up or, as the Irish-British playwright Shelagh Delaney once put it, being flung up.

Director Neasa Ni Chianain’s documentary, which debuted to raves at the Sundance Film Festival this year, presents a year in the life of the Headfort House, a private primary school in Ireland (the nation’s only one).

Beginning as a straightforward telling of the school year, it quickly becomes an utterly absorbing portrait of the long and happily married couple John and Amanda Leyden, both staff members for over 40 years and manifestly gifted in their chosen professions.

Ni Chianain and co-director David Rane (who also produces) have the sense to understand that the story is already staring them in the face.  Instead of imposing a narrative, they let what’s already in front of them emerge, with the cameras capturing the eccentricities of their pair of uniquely well-matched protagonists.

Love between two people who enjoy each other’s company as well as these two is a story in itself, but another undeniable star of this diverting documentary is the bucolic setting, a rambling 18th century mansion about 50 miles from Dublin that was first opened in 1948.

Ni Chianain notes the presence of the other teachers, but her camera’s infatuation with the Leydens makes the film.  John Leyden teaches Latin and math, and his wife Amanda specializes in English literature.

Teacher John Leyden with a student at Headfort House.

If you were aged between seven and 13 and had a choice about where in Ireland you’d like to be educated, you couldn’t do much better than fetch up at this oddball but thoroughly impressive alma mater.

If you’re picturing a sentimental Dumbledore or Mr. Chip’s style headmaster cocooning his precious charges against the unfairness of life, that’s not what the Leydens or School Life is offering.

Stoic and self-assured, their brand of teaching employs bone-dry, seen it all humor and gently bemused detachment.  Their ambition for their students is to make them “balanced, independent, thoughtful,” and this they set about doing with gusto.

At Headfort House you certainly won’t be coddled. Hearing “That actually wasn’t too bad,” at an after-school band practice is actually considered very high praise.

The lush landscape of Kells, Co. Meath is another star of the beguiling film, reminding us that these are the children of the well-to-do who live in an Ireland of understated privilege and ease that many may have forgotten still exists.

Childhood is another country that many adults may have forgotten still exists too, and so Ni Chianain takes her time and lets the rhythms of the school year quietly drive the narrative, with illuminating results.

We soon discover that John and Amanda Leyden bring every life skill and enthusiasm in their considerable armature to their teaching.   For John, rock music is a subject as worthy of careful consideration as math, English or Latin.

For Amanda, the royal road toward connecting with children is the book, and she is an adept at connecting with their forming minds.  The sheer quality of the Leydens teaching and the effect it has on their students is clearly seen in the journey some children make from homesickness to realizing with some dread that they must actually go home. Watching tentative and uncertain children blossom under their guidance and frankly care into confident and considerate young people is one of the rewards of their work and this carefully crafted film.

Knowing how to communicate with a time and place that the rest of us have long since left behind is a skill that less and less people possess now in an era where interconnectedness often just means shouting to make yourself heard above the fray.

As John and Amanda contemplate their own looming retirement, the film asks an unsettling question: will this kind of thoughtful and compassionate cultivation of a future generation live on after them? Or will it increasingly diminish and possibly even vanish completely the way longstanding community-centered practices often do nowadays?

John and Amanda contemplate what will become of them after they take their final class. Perhaps they’ll buy a little farmhouse somewhere in the country. Perhaps they’ll be visited by grateful and now grown up former pupils the odd time.

But leaving Headfort, it becomes clear, would be like waving goodbye to their own family, and for this happy couple that departure would constitute a real severance.

It’s the intimacy of the portrait that is the most striking thing about Ni Chianain and Rane’s documentary.  Their cameras are everywhere, capturing everything that happens.  In fact they must have been ubiquitous, because both teachers and students look so comfortable in front of them.

With its undeniably magical setting (a magnificent former lord’s manor filled with secret doors and imposing architecture) School Life could easily make a play for an international audience already primed for the last two decades by Hogwarts and Harry Potter.

But this documentary isn’t content to traffic in sentimentality or simple moral fables. It’s about great effort being its own reward, and how that reward can later translate in ways that you haven’t even imagined.

By the end of the school year kids who arrived at Headfort House homesick and feeling utterly alone don’t want to leave their newfound pals, their inspiring teachers or even the school which has become their new home away from home.

Ni Chianain’s achievement is that you’ll feel the same way yourself by the film’s end, unwilling to return to the far less thoughtful requests of the real world, where questions don’t always have a right answer and where the only guidance you can find is what you bring with you.

If this kind of bespoke education seems like a throwback to a more privileged time that’s unfortunate, because Ni Chianain’s cameras reveal to us just how much sensitive and shy children can blossom under careful and considerate supervision.

The second Irish film about life in an Irish boarding school (Handsome Devil, which is now available on Netflix was another notable new Irish film this year) it seems our directors are engaging more and more with the fraught business of growing up Irish, and films like these remind us how different the process can actually be under the right supervision, with predictably superb results. Don’t miss this uniquely thoughtful portrait of young Ireland in the making.