From the immigrant struggles written about by legendary Irish rock band Black 47 to the era-defining hunger strike of Bobby Sands, major Irish political questions will get a big screen airing at the Craic Fest in Manhattan this year. 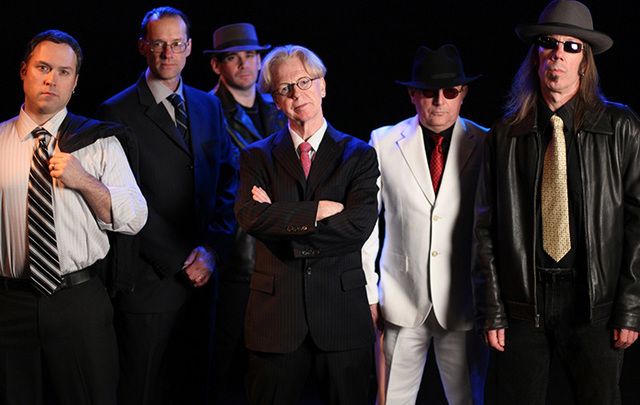 Black 47's two and a half decade long ride is told in Fanatic Heart, a new documentary.

From the immigrant struggles written about by legendary Irish rock band Black 47 to the era-defining hunger strike of Bobby Sands, major Irish political questions will get a big screen airing at the Craic Fest in Manhattan this year at what is sure to be one of the most provocative roll-outs in the Irish film festival’s history. Cahir O’Doherty speaks to festival organizer Terence Mulligan and singer Larry Kirwan and previews what’s on offer.

It’s the 19th year of the Craic Fest, the annual New York City-based festival of the best new Irish films, and if you think that means it’s probably getting safer in its programming, think again.

The annual showcase of new Irish films combines gala premieres, new Irish films and a great night, but it does it with a punk rock flair all its own which is why it beats the rest.

This year is no different, starting on March 3 with "Fanatic Heart," the new documentary about legendary New York Irish rock band Black 47. Shot over the course of 16 years, the film dives deeply into the history of the band whose name derives from the worst year of the Great Hunger in 1847.

Black 47’s great theme, the film reminds us, is the most foundational Irish one of all – the struggle against every form of oppression. The band itself sprang from – and then it became part of – the Irish fabric of the city, giving a voice to the new Irish immigrant experience.

But first they had to find their own feet, and the film begins by returning to the band’s early days. “I remember a great creative rush as we were playing four sets a night and wished to play all original music as soon as possible,” Kirwan told our sister publication, the Irish Voice.

“We were very clearly political and, while we respected the Waterboys and the Pogues and Christy Moore, we had no intention of becoming a cover band.  ‘D'yez not know nothin’ by Christy Moore?  The next thing you'll be wanting is ‘Danny Boy!’”

Kirwan sang on one of the band’s most famous tracks “Rockin' the Bronx,” making the band’s approach clear.

“And when we finally sang ‘Danny Boy’ we cast him as a gay, kick-arse, construction worker,” says Kirwan, whose own badass credentials will never be doubt.

“Overall there was a lot of dissent, arguments, firings, curried by that incredible feeling that we were rapidly finding our voice and an audience for whom we meant so much,” says Kirwan. “As Paul Hill put it back in the early days, ‘Black 47 is a voice for the voiceless.’”

"Fanatic Heart" is an epic portrait that takes place during The Troubles, the tragic events of 9/11 and the war in Iraq, and it’s also a brutally honest depiction of the boozing and the triumphs and disasters of a band that found commercial success but had more important things on its mind.

Why did Kirwan decide the time was right for this documentary? “I didn't. This is Vic and Stef’s (directors Victor Zimet and Stephanie Silber) view of the band,” he says.

“I always saw Black 47 from the center of the cyclone, as it were. It was all about creation and saying what you thought was important, politically and socially, and then dealing with the consequences.  So, it’s really interesting and pretty gripping to view it from a much calmer perspective.”

The Irish experience in America changes every immigrant. How has it changed Kirwan, who saw his dream of a rock and roll career fulfilled?

“After seven years over here most of the subtle British media influence has burned off.  You begin to see both Ireland, and yourself, in a clearer light.  So I was already well beyond that when Black 47 formed,” he says.

“But I was pretty shaken by how entrenched and conservative Irish values were in the bars of the Bronx that first year – and the Bronx was really all that counted in those days. Then we got on radio and TV and everyone takes a second look at you.

“So we headed out into the country and were already heroes to Irish American youth who'd seen us on MTV, Letterman, Leno and O'Brien and heard us on their alternative radio stations. But we were singing about James Connolly and Bobby Sands MP mixed in with tales about girls – and boys – that you wouldn't take home to your mammy.”

Kirwan remembers there were pitched battles with promoters and local tastemakers who didn’t see eye to eye.  “In essence, we went head-to-head with the remnants of the 1950s emigration – many of whom I liked and respected – and in so doing helped change Irish-America into the more open, if blander, community it is today.”

That’s a legacy worth celebrating and in "Fanatic Heart" it is (the directors will be in attendance at the screening).

On March 3, look for "Rebel Rossa," which tells the story of Jeremiah O’Donovan Rossa, the celebrated Irish patriot who was exiled here after six hard years in English jails. He spent most of his life in the United States, plotting not only how to liberate Ireland but how to get back to his homeland.

The new documentary is presented by director Williams Rossa Coles, his great-grandson, who might be an Irish citizen now if his famous forbearer hadn’t been exiled. “That’s why the Craic Fest is the perfect place for this premiere,” Rossa Coles tells the Irish Voice. “It’s not only Irish and American but New York!”

“While we knew something about our great-grandfather, such as his time in prison and the importance of his funeral in 1915, we didn’t really know the whole story. He was a consistent, outrageous and colorful fellow who was motivated with a particular drive that never let up. We filmed it as a journey exploring the beginning of what led to the 1916 Easter Rising.”

On March 4 the Kids Fleadh will be presented at 11:30 a.m. with a series of short films sure to appeal and an Irish step dancing dance class provided by Niall O’Leary.

Later at 1:30 p.m. director Sean O’Cualain will introduce "Crash and Burn," a documentary about Tommy Byrne, the colorful Irishman who for a New York minute in the early 1980s was the world’s greatest driver.

“He’s like the George Best of racing,” says Craic Fest founder Terence Mulligan. “He burned his candle at both ends for years and so his story is one of mad excess and spendthrift ways.

“But he really doesn't care. ‘Life is pretty good right now,’ he tells the camera. ‘I just lost out on about $100 million.’ You have to see it.”

At 3:30 p.m. on March 4, "Puck O’The Irish" tells the story of how the hurley influenced – and to hear some tell it, all but created – the sport of ice hockey in Canada. Playing our national sport on the ice evolved into hockey to make the game playable on a slippery surface, the filmmakers contend. Urban myth or historical fact, see it and decide for yourself.

At 5 p.m. on March 4, "I Am Traveller" by "Love/Hate" actor John Connors will be, he says, “the first non-propaganda documentary piece on Travellers. It had a profound impact on the Irish public and it started a national conversation about Ireland’s last acceptable form of racism for the very first time.”

At 7:30 p.m. the Craic Fest’s closing gala film will be "66 Days," the acclaimed new documentary focusing on hunger striker Bobby Sands, the man who has become an undisputed icon of 20th century political activism.

Using eyewitness testimony and previously unseen archive material, director Brendan Byrne has provided the definitive account of the life and legacy of the self-created Irish martyr.