The soul-warming strange yarn ye are about to read here is totally different to all the generally chilling tide of stories featuring China and Chinese affairs lately. 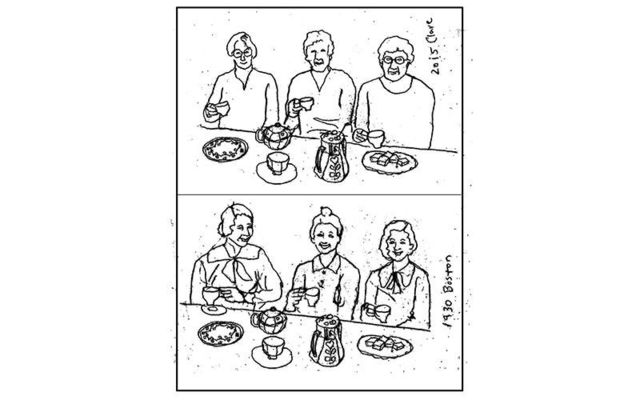 The soul-warming strange yarn ye are about to read here is totally different to all the generally chilling tide of stories featuring China and Chinese affairs lately.

This story, I think, will touch many of you to the quick of your souls as it certainly did mine when it came to me lately through the family circle.  I will get right into it without further ado, without wasting any more precious time and space, and I trust many of you will savor it every bit as much as I have.

We will go back as far as 1933 in East Galway’s district of Knocknagur outside Tuam and Ellen Donnellan of that parish, whose three daughters, like most of their generation, had already emigrated to Boston.

Ellen received a letter from her daughter Mary stating she was about to get married. Mary was a stately and formidable lady who had spent a few years in Boston herself before returning and marrying at home. Upon getting the good news from Mary, she responded by walking the five miles from the family farm in Knocknagur to buy a delicately beautiful china set for what would then have been the considerable price of between seven and 10 shillings at the time. She probably had the cash from selling hen eggs on the local markets.  Or maybe the purchase was funded by daughters’ dollars sent home from Boston.

Anyway, she not alone bought the china set, she also had it shipped over to Boston to her daughter.  It is the family history in Mary’s home in Brooks Avenue in Boston that the china tea set had pride of place on all family occasions, and there were many of those.

Now we vault down the decades to 2015. My beloved sister-in-law from my first marriage, Margaret Conlan from Ennistymon in Clare, is visiting her American relatives at about the time the family home in Brooks Avenue was being sold.

Margaret was interested in bringing the china tea set back home to the west with her. It is warmly offered, and a few months later the china tea set had pride of place again in Margaret’s home in Ennistymon, and the three Carney sisters gathered around for an evening of family memories and reminiscences.

During that evening, I’ve been told they fondly remembered their grandmother. She was a tall, stately lady with white hair in a neat bun at the back of her head, elegantly clad always with long black skirts garnished by silver brooches and, during the winters, warmed by the traditional red petticoats of her generation.

So the delicate china tea set survived two trans-Atlantic journeys in the last century and is now safely back home in Clare again in Margaret’s china cabinet, brought out in style for the frequent family gatherings of a lively and gifted clan.

Those of you who were born in yesterday’s Ireland are well aware of how the china tea set was always produced in pristine condition for important social and family occasions.  Remember how the priest would be brought down to the parlor for his mandatory cup of respect when he called?

The china tea set ornamented every important social occasion under the family roof, didn’t it?  That status still survives strongly today too.  Strong mugs for routine daily usage but the china cup for the special days, evenings and memories.

Many of you will probably like to know more details about the magnificently historic china that safely came back home after spending virtually a century in Boston. You are in luck on that front because the few details I have provided ye with here are drawn from a splendid article by Margaret’s sister Frances Murphy featuring on Milltown.galwaycommunityheritage.

Ye will find that with no difficulty at all and, having read the piece and enjoyed the photographs of the modern family members drinking their tea from very durable and widely traveled china cups indeed, ye will probably feel like opening your own china cabinet immediately.

Go ahead and do that!