34,499 Irish people live in the Greater Manchester area - throughout the country there has been a wave of sympathy for the British city. 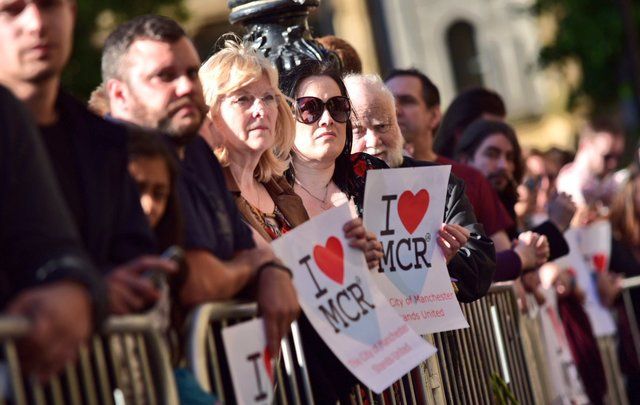 Despite Taoiseach Enda Kenny’s assertion that there were currently no plans to raise the terror alert level in Ireland in the wake of the vicious bomb attack at an Ariana Grande concert in Manchester on Monday night, security was stepped up at Dublin and other airports.

Thousands of people fly daily from Irish airports to Manchester where Monday night’s terror attack, claimed by ISIS, on a concert at the city’s Arena venue killed the suicide bomber and at least 22 other people, including children, and injured 59, many seriously.

With Manchester only a half-hour flight from Dublin, there are firm business and sporting connections linking the two cities. Belfast also has strong ties with Manchester.  Thousands of Irish soccer fans travel to Manchester every weekend to see either Manchester United or Manchester City in action.

An estimated 34,499 Irish people live in the Greater Manchester area according to the 2011 census and at least one-in-five of the city’s population are estimated to have Irish ancestry.

Throughout Ireland, there was a wave of sympathy with the people of Manchester. Initial reports didn’t reveal any Irish casualties in the attack on the concert where Grande was just completing her show when the lone bomber struck.  Two nights previous, Grande had performed in Dublin and posted several social media messages expressing her love for her Irish fans.  She also posted a photo of herself walking her dog in, of all places, the Daniel O’Connell cemetery in Glasnevin.

President Michael D. Higgins, All Ireland Primate Eamonn Martin who is archbishop of Armagh, and Kenny led a flurry of messages of sympathy from Ireland.

“This cowardly attack on innocent citizens will have appalled all those who care for democracy, freedom and the right to live and enjoy the public space,” Higgins said.

“Manchester has been home to the Irish and so many nationalities for centuries and at this terrible time I want to send the people of this great and welcoming city not only our sympathy but our solidarity.”

Higgins said he would be writing formally to Queen Elizabeth to convey the sympathy of the Irish people.

Kenny, although saying there were no current plans to raise Ireland’s terror alert level, added that the situation was being monitored closely in Ireland, and gardai were in touch with their counterparts in the U.K.  Kenny also had a meeting with Garda Commissioner Noirin O’Sullivan about current security arrangements in Ireland.

“The vile acts carried out in Manchester last night are a reminder of the depravity of the views held by the few. Those beliefs have no place in our society,” said Kenny, who added that he was “heartbroken” for all those affected by the tragedy.

Fianna Fail leader Micheal Martin said, “As a parent, I find this attack exceptionally difficult to comprehend, and while details are limited at present, it’s clear that whoever orchestrated this attack cares little for basic decency and humanity.

“The ties between Ireland and Manchester run deep, but we know that the people of Manchester are strong and resilient and will rise above this barbaric attack on innocence.”

Party leaders from both parts of Ireland joined in the expressions of sympathy, and in the North campaigning in the June 8 U.K. general election was put on hold.

“I actually heard the explosion in 1996 and it was massive but this is worse, children have been killed and it’s just disgraceful,” Manchester Irishman Kevin Gallagher told The Irish Post.

“We’ve heard of this in Belgium, Paris and even London recently, but it’s really come home here now on our doorstep and we weren’t expecting it.”

Martin Logan, a presenter with the Full Irish Radio Show who has lived in Manchester for almost 50 years told his listeners on Tuesday that discovering children were among the victims was “unbelievable.”

“I remember when the IRA bomb went off here in Manchester and the devastation it caused but it’s massively different this time, people have lost their lives and even worse there are kids among them,” he said

“How are you supposed to defend against this. It’s somebody just walking into a place and blowing themselves up. But I have to say that the community really rallied around last night.”

A father from Co. Derry described the “unbearable” experience he had on Monday evening waiting to hear from his 19-year-old daughter, who had been working at the concert venue.

Sean Woods told BBC Radio Foyle, “I was bawling like a child.  For the first time in my life I couldn't make any sense.

"People that were running past had blood running down their faces and, she said, their clothes drenched in blood.  Thank God she got in touch with us through her friend's phone on messenger and it was an unbelievable relief to hear her voice.

"I'm getting her a flight today. She's so badly shook up. We were up all night and we haven't slept.”