Ireland has no government but the economy looks good

Greetings from the land with no government. Well, no real government, anyway. 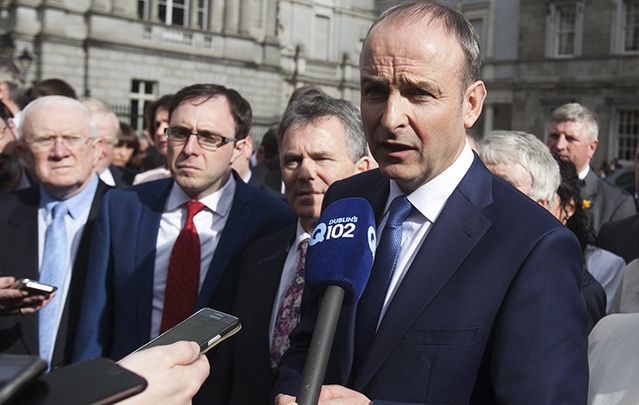 Greetings from the land with no government. Well, no real government, anyway.

We do have a "caretaker" government, led by an "acting" taoiseach. But they don't have a mandate to take any decisions other than those necessary to keep the national engine ticking over until a new taoiseach is elected and a new government is formed. And when that will be is anyone's guess right now.

This state of paralysis is the result of our inconclusive election result: Fine Gael with 50 seats, Fianna Fail 44, Sinn Fein 23, Labour 7, others (including independents and small parties) 34. This means that when the Dail reconvened for a day last week it was unable to elect a taoiseach.

None of the candidates who put themselves forward, including Enda Kenny, Micheal Martin and Gerry Adams, was able to get a majority of the 158 members of the house in the voting. Since a government can't be formed until a taoiseach is elected, Kenny adjourned the Dail until Tuesday of next week, March 22, and went to the president to tender his resignation.

Under the constitution he continues in office in an acting capacity, as do his ministers, but they don't have any real power anymore. Ceremonial events like presenting a bowl of shamrock to President Obama on St. Patrick's Day are about as big as it gets for Kenny and his outgoing government in the political vacuum.

Sadly, this stasis is the last thing the country needs at the moment. Yes, the recovery is continuing strongly. Official figures just released for the last quarter of 2015 show that the economy grew by close to eight percent, far outstripping all other countries in Europe, and unemployment is still falling steadily.

But that success is dependent on an administration that can keep a tight grip on spending, and raise enough tax revenue to get to a balanced budget as soon as possible. If there is any slippage the interest rate on our debt mountain will climb and our recovery will falter.

In fact there are all kinds of things that need urgent attention and strong decision making here at the moment if the recovery is to be maintained. But instead of clarity and purpose, there is a feeling of uncertainty and confusion in the air.

The unions in the state sector are gearing up for strikes to recover what they lost in the cutbacks. There are continuing problems in the health service, and the housing crisis is not improving. One indication of the sense of drift is that even law-abiding citizens are opting not to pay their water charges now because they think the next government may abolish them.

So where to from here? It could take several weeks to form a new government as the two biggest parties, Fine Gael and Fianna Fail, negotiate with the smaller parties and independents to see if either of them can cobble together a majority.

Intensive talks with various independents and small parties are underway this week, with all kinds of promises being made to try to buy support. But without including Sinn Fein, who are refusing to take part and are not wanted anyway because of the baggage they carry, it is very difficult for either Fine Gael or Fianna Fail to get the numbers for a majority, or even close to a majority.

The obvious solution is for the two main parties to form a grand coalition and finally end the division that grew out of the Civil War. Together they would have a strong majority in the Dail and could run an administration that would last a full five-year term.

There is very little difference between them on policy, so it seems to be a no brainer. But there are problems, particularly for Fianna Fail.

Although Fine Gael are not saying anything in public, one rumor doing the rounds is that they are prepared to offer a 50/50 partnership (or very close to that) in government to Fianna Fail, with a fair division of ministries and possibly a sharing of the taoiseach's role.

The idea is that once a policy program has been agreed between them, the government would last a full five-year term. Halfway through that there would be a reshuffle of ministers between the parties, and the taoiseach would change.

A major reshuffle halfway though the term of a government is not unusual, so such a power-sharing arrangement is not as bizarre as it sounds at first. The only new aspect is that the most powerful departments, like finance, would be swopped between Fine Gael and Fianna Fail and the taoiseach would change as well, although the agreed policy platform would remain in place. This would mean equal time as taoiseach for Kenny and Martin, with the possibility of Martin going in for the first two and a half years.

If such a generous offer is made, how could Fianna Fail refuse? Their problem, as we said, is Sinn Fein.

Fianna Fail rightly fear what would happen if Sinn Fein is left as the leading voice on the opposition side of the Dail, free to criticize everything, offer easy populist solutions to all problems and build their support with the 2021 election in mind.

In such a scenario, Fianna Fail could see its core base erode, particularly among younger voters who are not influenced by what happened during The Troubles and who don't understand that the “radical” policies promoted by the Shinners which they find attractive simply don't add up.

That is why the current thinking in Fianna Fail is that if they can't lead a minority government themselves, it would be far better for them to stay in opposition and support a minority Fine Gael government, imposing some of their policy from the outside and in a position to force an election at a time that suits them. They believe that would be far better than joining a grand coalition which could see them being outflanked by Sinn Fein and losing their identity.

It's a difficult one for Fianna Fail, given the temptation of being back in government so soon after being almost wiped out in the 2011 election.

They will be in no hurry to make a decision, since delaying progress will heap humiliation on Fine Gael and prevent Kenny from giving the impression to the country that it's business as usual. There is a strong possibility that if Fianna Fail does eventually agree to join a grand coalition, part of the price may be Kenny's head.

That would be no harm since at this stage it is clear that he would be a lame duck taoiseach if he does get back. Given the phenomenal economic growth mentioned above and the ongoing increase in job creation, losing so many seats in the election was a major failure on his part. The election was Fine Gael's to lose and they did so spectacularly, with Kenny a major factor in the failure.

It happened because Kenny and Fine Gael failed to get across the message that the recovery was real and that it would in time lead to a brighter future for everyone. After the past five years of tax hikes and cutbacks, austerity fatigue had eaten into support at all levels.

The majority middle class voters felt squeezed beyond what was bearable by all the tax hikes and new charges and the increasing cost of health insurance, child care, transport and all the other things families have to pay for, which left them struggling to stay afloat. For younger couples trying to set up home, the housing crisis made life even more difficult.

Among low income voters, despite the fact that welfare had been protected, the feeling was that nothing was being done for them, and things like the new water charges and a shortage of social housing and soaring rents in the private sector gave their anger a focus.

The reality is that things are improving, but the dependency culture we fostered here during the boom years means that whatever is done is never enough. Kenny's reference to a nation of whingers had more than a grain of truth, but of course it was a disaster from an electoral point of view.

The first day of the new Dail last week was a depressing spectacle, with a host of first time deputies (many of them independents) milling around in a party atmosphere, seemingly oblivious to the complex challenges that lie ahead. The Healy Rae brothers from Kerry climbed on the roof of a Jeep outside the Dail and played music like they were at a traditional session outside a country pub.

Inside the Dail, the tortuous procedure of trying to elect a taoiseach went ahead, with each party leader being proposed in turn, speeches being made and votes taken. It took hours, got nowhere and was extremely boring.

After all the talk about Dail reform, it looked very much like it always did. Each party was looking out for itself and no one was minding the country. And with nothing achieved, the Dail was adjourned.

Before that happened, the new Ceann Comhairle (Dail chairman) Seán Ó Fearghaíl was faced with a nasty and noisy attempt by Sinn Fein to have a water charges vote added to the Dail agenda when the house returns on March 22.

Whoever forms the next government is going to have to sort out the water charges mess, and that is going to take ingenuity and time. There's no simple answer and It's not going to be solved by the first day back, which Sinn Fein know well.

What they were trying to do was embarrass Fianna Fail who are also against the charges, but in a more nuanced way and only for the immediate future. Fianna Fail knows that eventually some way has to be found to get Irish people to pay for water, as people do in every other country in Europe.

To stop the Sinn Fein water charges vote trick, Fianna Fail had to vote with Fine Gael in the Dail to stop the March 22 agenda being changed, which did not look good for them. It was an early warning sign for Fianna Fail of the cynical way Sinn Fein will exploit difficult issues like water charges to undermine them.

It will have scared many in Fianna Fail away from the idea of entering a grand coalition and leaving the opposition to the Shinners. Not for the first time, Sinn Fein may have shot themselves in the foot by trying to be too clever.

It seems most unlikely that a deal to elect a new taoiseach will have been worked out by March 22. If that happens, the house will then adjourn until April 6, which is now being seen as the most likely date for the formation of a new government. But it could drag on a lot longer than that.