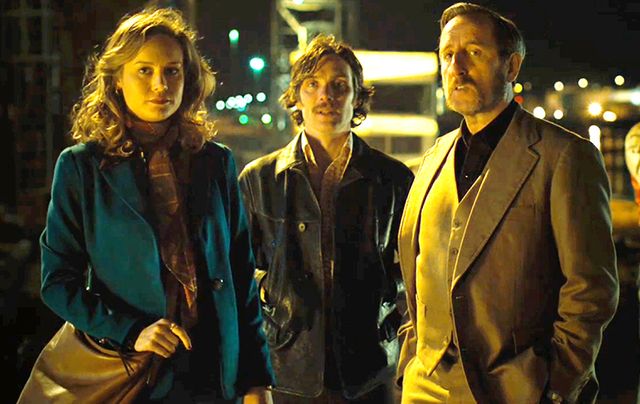 In Free Fire Ireland’s Cillian Murphy, Jack Reynor, Michael Smiley and Patrick Bergin take their positions on opposite sides of a lethal stand off between IRA men and American gunrunners. It’s 1970s Boston and a secret arms deal comes unglued, leading to a vicious last man standing shoot out. Cahir O’Doherty checks out the film that is dividing critics and audiences almost from the first scene.

Boston, 1978. The era of big shirt collars, polyester pants, shaggy hair dos and disco. In Free Fire, which opens Friday, it’s where moonlighting IRA men arrive to purchase high-powered rifles to bring back to the North.

First up there’s Cillian Murphy and Michael Smiley as Chris and Frank, two IRA men anxious to collect the hardware they were sent to the states for so they can head back to the war in Ireland.

Then there’s Sharlto Copley and Armie Hammer, a South African hood and an Ivy League hit man who between them have what the IRA men are looking for -- for a steep price of course.

Then there’s Brie Larson (who won an Oscar last year for her turn in Irish director Lenny Abrahamson’s Room) who plays Justine, the go between who arranges the meeting between the two factions. Asked by Chris what her involvement is she replies, “IIFM, in it for myself.” That’s a note that becomes important later.

The meeting between the king pins in Free Fire is tense and full of banter that would probably be very illuminating in other films, but in this one are just delivered as broad character strokes. From the get go there’s a kind of heightened theatrical quality to the setup, as if you’re watching the opening moments of an Elizabethan play rather than a film.

But the dialogue makes it clear early on, this sure isn’t Shakespeare. Director Ben Wheatley is clearly more interested in the overall statement his film is making than in any one character that might be making it.

There’s also a video game shoot-out feel in certain scenes that tips you off to what Wheatley is really up to.  This is a big, mad, blow em’ up bonanza, and the audience will have to decide whether it’s satire, action, horror or documentary, or all four.

Larson is dependably brilliant as a young but unexpectedly tough as nails broad with an all too human desire to get rich quick at just about any cost. From her first scenes, she’s the audience’s conduit into this world and the only woman in the otherwise all-male cast.

Larson excels at making the film’s subtext text through a well time eye roll or a well-judged sigh.  Idiot boys surround her and her objective is clearly to get as much as she can with the minimum effort, a task that looks increasingly easy considering just how amateur the criminal outfit turns out to be.

Murphy plays Chris, an equally tough as nails IRA man who only wants the guns he has paid for and nothing more. In the film, Murphy gets to try out his flawless northern accent work against the native-born Smiley, one of the hardest working and most accomplished Irish actors of his generation.

Jack Reynor plays Harry, a driver and bag man whose vengeance on Chris’s cousin the night before sets events in motion. Reynor is terrific but gets a little lost in the editing, as does every other actor sooner or later due to Wheatley's overarching storytelling.

Jack Reynor plays a shooter with a death wish.

There’s a lot of banter about Ireland at the beginning of Free Fire to set the scene, but what Wheatley really has his eyes firmly trained on is America. He has them set on the insane amount of firepower that’s easily available to the scrupulous and unscrupulous alike.

Many critics have seen Quentin Tarantino’s influence on what follows. Others point to Martin Scorsese, who executive produced Free Fire. Neither director’s shadow adequately explains what is happening in this film though.

It’s more helpful to see Free Fire as what it clearly is, a blistering take down of the utter pointlessness of random gun violence, and a simultaneous celebration of 1970s style gang warfare B movies, a hybrid that tries to break new ground while paying a certain homage to what came before.

Wheatley’s direction is symphonic; he sets the scene with an operatic eye for detail and action. When Chris’s cousin is revealed to have assaulted one of the gunrunner’s cousins the night before a straightforward deal goes south and violence erupts.

Before you can say Saturday Night Fever guns are drawn and a lethal firefight erupts that is increasingly savage and pointless. Wheatley has a keen eye for male vanity and the nihilism that follows it, so the biggest laughs are had at the antics of his cast of hapless male characters as they fight to the death, exulting over their defeated enemies only to find themselves outgunned in the next scene.

From the first moments, the tension of what’s coming is ever present. In Free Fire guns once again look and sound lethal, not the pretend kind that most you hear and see in super hero capers now.

“I was wondering why I was less excited by massive action stuff in big movies. I would watch them going: This should be amazing, but I’m not connected to it,” Wheatley told iNews.

“I started looking back to older films from the 1970s and ‘80s. It was the human scale of things that they had. I wanted to make something visual and dynamic, with crafty dialogue.” That sent him in search of accounts of real world gunfights and the “weird things that happen… that you never see in movies.”

The tension that arises in Free Fire mostly comes from the director’s decision (and indecision) to make you laugh, then be horrified, then lament the sheer stupidity of the standoff as it escalates.

Guns are horrible and do horrible things, we know. But people are too the director reminds us, and to make his point he introduces a cast that have few if any real redeeming qualities.

What Free Fire achieves with its visual flare, it sometimes forfeits with undercooked characterization. Who these people are is completely subservient to what they’re doing. Why we should care about them is another question that is rarely asked.

It is, however, absolutely worth seeing because although the film never quite pulls its metaphorical strands together, it's still a subversive enterprise that unnerves as often as it entertains.

An audience of critics at the screening I attended was divided in their estimation of its charms. Some thought it pastiche and others homage; some claimed it was satire and others a straightforward shoot em’ up.

When there is this much diversity of opinion about a director’s work it is usually safe to say he or she is an auteur and the work has done what it was intended to do: create a strong response in the viewers.

In the current political climate, it’s amazing a film that’s as complex and implicating as Free Fire even got made. That in itself is a thing to celebrate.