When Paddy (Manchester) got wise

"From my folklore and rural experience, I wrote about the funeral experience of Paddy (Manchester) because, truly, I did indeed know him well all my life." 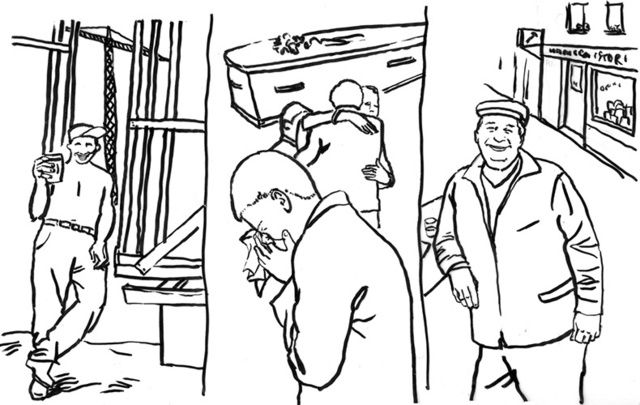 He came up to my left elbow last weekend when I was enjoying a few drinks with my Galway sons.  "Are you the Cormac MacConnell who used write for The Irish Press?”

"I'm glad to meet you at last. You don't know me, really, but you know me well too."

The brackets are mine here and dammit, despite all the millions of words I've written over the past 30 years I instantly recalled the piece published one Monday entitled "Paddy (Manchester)" and I recalled what had triggered it too.

It came from the death notices page I read every day back then in case I'd miss the passing of some person I knew.  And on this day there were two notices in succession dealing with the deaths of two aged mothers in the west, and there was a striking similarity in them.

Their bereaved children were listed, you see, and both lists began with a priest, followed by a nun -- two in one list -- then locally married daughters and finally, last on both lists, Paddy (Manchester). And, from my folklore and rural experience, I wrote about the funeral experience of Paddy (Manchester) because, truly, I did indeed know him well all my life.

I said he got the news from home on the building site where he was working in Manchester since leaving home four years earlier, the youngest and wildest of a very staid and proper family.  He was nursing a hangover after his usual wild and boozy weekend when he got the news from the foreman.

He went back to his boarding house in a daze and phoned the home of the married sister who had a rare enough phone at home back then and said he would come over the next morning.

His mates were as supportive as they could be. They ensured between them that he was properly funded for the funeral trip. One of them gave him the loan of his good tweed overcoat.

Off he went and arrived home on the bus from Dublin the afternoon after the death of his mother.

The senior family members scrutinized him carefully the minute he came in the door.  He'd been home two summers earlier, you see, and became involved in a pub brawl over a young local woman they disapproved of. They hoped he would not disgrace them again even as they

warmly welcomed him home in front of the neighbors.

At least he was wearing a good suit, white shirt and red tie, and had a good tweed overcoat. They were shocked, especially the priest brother, at the loud sounds of his raw grief when he knelt by the bedside of his dead mother in the front room. It was very loud and uninhibited.

A sister instantly closed the bedroom door to cut off the sounds. No way, said their faces, to show respect for the dead in this parish.

After he regained some control of himself Paddy (Manchester) came out to the rooms where the wake was being held and received the sympathy of all the neighbors and relatives.  "I'm sorry for your trouble," hundreds of times.

A married sister he'd always been fondest of gave him a good meal in the parlor and a glass of whiskey and whispered into his ear to go easy on that stuff, you know what it does to you. All evening he watched his intake, said all the right things, did all the right things, not realizing at all that the faces and actions of the neighbors clearly indicated that he was by far the most popular member of the whole family.

By the time he got as far as his childhood bed upstairs he was exhausted but still couldn’t sleep and in fact wept for hours. He wore his tweed overcoat at the graveside the next morning against the cold but was still shivering.

The family was shocked when he loudly wept again as the clay fell down to strike the coffin. Father Hugh preached a tribute to their mother in a loud clear chapel voice however, and that balanced the situation for the family.

That evening none of his family joined Paddy (Manchester) in the town pub, but his brother Liam who had inherited the farm said he would collect him there at closing time and for God's sake stay sober.  Paddy (Manchester) was heartened by the warmth of the welcome he received from his old friends there, especially the lads he'd played football with before emigrating. He drank pints instead of spirits.

The pub landlord said they’d received a phone call from one of his Manchester mates to tell him that he too was in Ireland, and would collect him the next afternoon to bring him back to work. Liam was waiting outside the door for him at closing time but did not come in to the pub for a drink with him.

His friend called for him the next afternoon as arranged and his siblings said kind, relieved farewells to their prodigal son. That was the gist of the yarn I wrote.

Incredibly the big Paddy (Manchester) I met last weekend told me that, though his name is not Paddy, he read the piece after returning from his own father's funeral in Sligo "and it was the very same as that for me, all the way, you hoor you!"

Equally incredibly, it made him focus on his lifestyle from that day on. He gave up drinking almost entirely, concentrating instead on advancing himself, soon became a small sub-contractor himself, did well, made some money, married an English girl, and came back to his home town 20 years or so ago to establish a hardware business and has prospered since then. He looked prosperous and happy as well.

"That Paddy (Manchester) report of yours did the trick for me for sure." And he clapped me on the back.

He insisted on buying me a drink of the best single malt in the house and would accept no drink in return. I toasted him before he left us and surely, warmed from the heart outwards, I have never more relished a drink than that one.