Happily ever forever… And Trump

We will drop into the slice of the Wild Atlantic Way which Donald Trump owns -- yes he does! -- in a little while, but first I have to openly confess to you all that the top of this yarn is especially directed towards my dear and gifted friend Caty Bartholomew who does our weekly illustrations for this column. 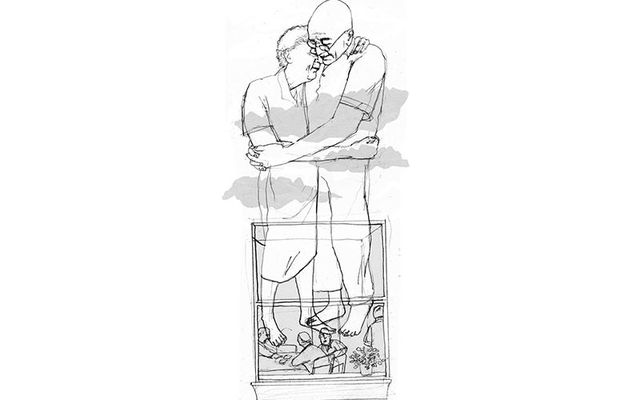 An illustration of Josephine (née Slater) and Cecil Johnston, an elderly Irish couple in Dublin who passed away within a day of each other. Caty Batholomew

We will drop into the slice of the Wild Atlantic Way which Donald Trump owns -- yes he does! -- in a little while, but first I have to openly confess to you all that the top of this yarn is especially directed towards my dear and gifted friend Caty Bartholomew who does our weekly illustrations for this column.

Week after week I am often green with envy at how artistically effortlessly her artwork alongside stories is so hugely superior to the mere words. We have been together now in this space, Caty and I, for a long time. It has always been a great pleasure.

Anyway Caty is taking a deserved break towards the end of the month.  I wished to find some angle upon which she could work her alchemy for us all. And was I not blessed altogether when I stumbled across a very special little notice in the Sunday Independent.

Not alone did it touch me to the marrow, it even brought a rare tear to the corner of my left eye. And I know well that Caty will enjoy illustrating a very special love story before she takes her holiday.

This notice appeared amongst the death notices in the Independent.  Many of you are aware that these notices in Ireland follow a quite rigid word structure. The addresses of the deceased are listed, the names of all family members down to the smallest grandchildren, and full details of the upcoming funerals. All the necessary information.

I read these notices at least weekly because, frankly, I am of the aging generation whose members, including many friends, appear there far too often. Enough of that for now.

This notice though was sharply different. Accordingly, I reproduce it in full exactly as it was published:

JOHNSTON, Josephine (née Slater) and Cecil (Sutton, Dublin 13)-Feb 6 and 7, 2018 respectively, in the excellent care of all the staff at the Belmont Nursing Home, she in her 93rd year and he in his 92nd.  They’ve loved and adored each other for more than half a century; sadly missed by their loving relatives and friends, but together now, as always. May they both Rest In Peace. Funeral Mass tomorrow (Monday) morning at 10’o clock in Saint Fintan’s Church, Sutton with burial afterwards at St. Fintan’s Cemetery.

That’s it in full. Is it any wonder that I was touched by the poignancy of two old gentle souls, after a lifetime together, departing from here in the same 24 hours?

An eternal love story from Dublin town.  Sharing all that life dished out to them in leafy Sutton and, finally, now sharing a mortal grave whilst their spirits soar freely together in the eternal dimension above us all.

I have no more words for their passing but can scarcely wait for Caty’s artistic take on a rare event. I predict it will be very special indeed.

Now to get back briefly to our journey up and down the Wild Atlantic Way and a probably totally accurate opinion I picked up in Tubridy’s great pub in Doonbeg a week or so ago from a man called Hughie who is clearly a lot sharper than the rest of us when it comes to dealing with the works and pomps of Donald Trump.

Your president, of course, is the owner of the Trump International golf resort in Doonbeg, slap bang on the jagged edge of the Way.  I’d forgotten to mention that earlier on our jaunt.

Through this property Trump is also easily the largest employer in the Doonbeg area. For that reason alone, if no other, he will always be welcome there if he drops over for a round.

Hughie’s viewpoint, which I enjoyed immensely, was different to any other either you or I have heard before. He said, I think accurately, that the trillions of Trump tweets in existence betray the reality that the POTUS is prone to misspellings and never passes any heed on them or makes any corrections later.

According to Hughie, it is likely that Trump meant to campaign for office under the slogan Make America GRATE again to put competing global powers in their place. However, when the misspelling caught on all along the Rust Belt and beyond he stuck with it and it worked all the way to the Oval Office.

Said Hughie, “And he has kept all the promises. He is using a sharp grater even against his own workers in the White House, two or three of them fired every week for God’s sake, never mind Mexicans and Muslims from many countries around the world. He is grating down yer man in Korea, Putin in Russia, anyone that crosses his path. That’s the real truth.

“If that mighty man came in through the door now, Cormac, I’d be delighted to buy him a pint so I would.”

Passing on the view of that wise man for what it is worth. Judge for yourselves.