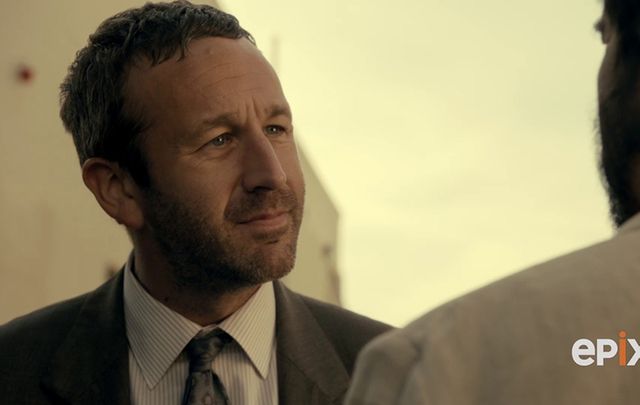 In Get Shorty, actor Chris O’Dowd gives the most accomplished performance of his career as a criminal who will literally stop at nothing to see his dreams fulfilled. Cahir O’Doherty talks to the actor about the role and asks why the Irish are such a big hit in Hollywood, where honesty is the rarest thing you’ll ever find.

Halfway through the first episode of Get Shorty, now available to view for free on Epix, you get the unmistakable feeling you’re watching a soon to be classic crime drama.

Starring County Roscommon native Chris O’Dowd, 37, as Miles Daly, an Irish career criminal desperate to break into movies and out of his violent lifestyle, the show is a delightful mix of comedy and chaos, and it gives the actor the role of his career to date.

“It’s the kind of role I don’t get offered very often,” he tells the Irish Voice candidly. “I don’t generally get to be seen as a physical person at all really. I mean somebody who could elicit fear from another person. I thought that would be a challenge for me because I hadn’t done it before.”

O’Dowd admits he was looking for a role in a TV show because he wanted a bit of stability in his career for the time being. “My wife (writer and TV presenter Dawn O’Porter) and I have been having kids and so it’s nice to know where you’re going to be for half the year. In terms of Get Shorty I hadn’t read the original book or seen the 1995 movie so I hadn’t any expectations. I just really enjoyed the TV script when I read it, and it was a pretty easy one to take on.”

Finding something scary is generally a good reason to embrace it, O’Dowd says. “If you’re somewhat fearful of it then it’s probably the right decision, I think,” he adds.

The show has no illusions about the desperation hidden under the hood of the dream factory, and so for O’Dowd’s character Hollywood is portrayed as both the end of the rainbow and the end of the line.

“LA is an interesting city for a load of reasons, you’re right,” says O’Dowd. “It kind of reminds me of those towns in the very north of Scotland where there’s an oil rig off the coast and everyone who lives there is somehow connected to the jobs on it.

“The industry is unusual because people in Hollywood can make an awful lot of money in it and that makes it desperate. So much of it has to do with luck. There isn’t a natural pecking order that makes any sense.

“But it’s also like a pioneer town. It doesn’t have a set of rules that have been established quite yet. It’s kind of the edge of civilization. At times it doesn’t even get close to reaching civilization.”

O’Dowd performs the role with his own Irish accent and makes no excuses for it.

When the producers approached O’Dowd for the role it had never occurred to them that Daly wouldn’t be Irish he says.

“If they hadn’t cast me they would have cast someone else with an accent because I think they wanted to accentuate the fish out of water part of it all, somebody who doesn’t feel like an insider in any sense.”

As you will see from show’s opening moments, there’s a delightful purity to Daly.  He’s just a regular guy who’s obsessed with movies, mostly because they help him escape his troubled life.

“As we get into the show later on in the season we talk about the fact that as a kid he spent some time in the North in Fermanagh and some bad stuff went down. Back home he saw the cinema as a refuge from The Troubles in the 1980s,” O’Dowd says.

This is the kind of illuminating character detail that O’Dowd brought to the show himself. “I had read about how cinemas became safe heavens for certain communities in Ireland and I’ve always found that fascinating. It ended up becoming this nice catalyst for why this guy became a huge movie fan.”

There’s something very pure about why Daly’s trying so hard to make his movie. He’s trying to get out of his criminal lifestyle. What’s also interesting is that although he’s unarguably a dangerous hood, he’s genuinely trying to make a great movie too.

It makes for comedy gold, but it undercuts it with real menace. These guys will shoot you in the head if they don't like the rushes.

“Miles quickly abandons his first objective, which is to stop being a criminal, in favor of making sure the film is made,” laughs O’Dowd. “There’s something that’s gloriously funny but sincere about that which I enjoy.”

Like any role, O’Dowd tried to make the character his own. “I haven’t seen the original Get Shorty movie before I took the job so I didn’t have a lot of expectations. I felt that keeping it different from the character that John Travolta played onscreen was going to be useful. A competition for who can be the slickest mob guy is never a competition I could win.”

What about being Irish in Hollywood? It seems to have really helped anchor stars like Colin Farrell and Saoirse Ronan, keeping their feet on the ground as they hit the heights. Is being Irish a plus in that hall of mirrors?

“That has definitely been my experience. My nationality is never done anything but been a huge benefit to me, I think anyway,” O’Dowd says.

“I always found LA understandable quite early on. I know people complain about how fake it is and how much bulls*** there is. But once you see that you can use that. Forthrightness is such a commodity here because it’s so rare. In the land of the blind a one-eyed man is king. I just don’t hang out with those people.”

In Hollywood people are looking for genuine people because normalcy gets pulled from them the longer they stay there, he says. When they see it in someone else they’re drawn to it, O’Dowd believes.

“I think it’s because we come from a nation of great emigrants. There must be something in the Irish psyche. There’s a fearlessness. It’s not an accident that you go anywhere in the world and there’s an Irish community there and they’re doing okay.

“I feel like that’s true for Miles too – he’s clueless, but he’s not afraid of being clueless. He’s faking it but he’s not intimidated by his own ignorance and I think that’s an incredible quality that I for one have made a career on,” says O’Dowd with a hearty laugh.

There’s certainly some lovely writing in Get Shorty. As the show progresses we’re introduced to a wealth of great characters, but more than anything it’s just a really good story.

“One of the reasons I was drawn to it was because there’s no reason this guy shouldn’t end up running a studio. There’s also every reason why that should not happen.  That’s kind of what will bring us along. That contradiction,” says O’Dowd.

People can be a little skeptical when they hear there’s a remake happening, O’Dowd admits. “I know I was. I would say to those people though that if you stick with it for 10 minutes you’ll be hooked.”