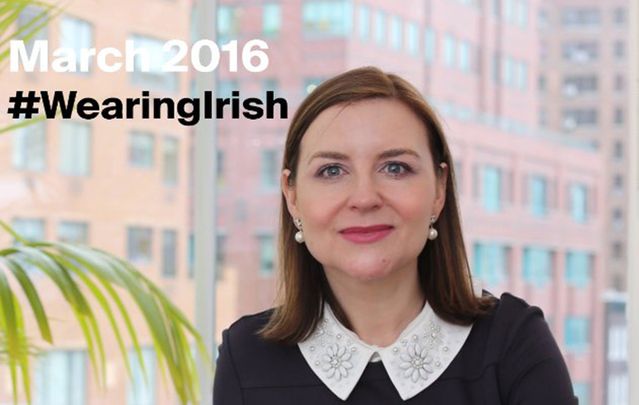 Ireland and all things Irish come into sharp focus during the month of March, and one marketing executive has made it her mission to ensure that Ireland’s vibrant fashion industry shares in the recognition.

Margaret Molloy, the New York-based global chief marketing officer for the branding firm Siegel+Gale, is spearheading a campaign this month called #wearingirish which encourages people to wear Irish-made fashion, accessories and jewelry every day in March.

“I enjoy fashion. I enjoy exploring the possibilities of social media for brand building. And I’m Irish. This March I’m combining all three passions in an effort to showcase Irish fashion. And I invite you to join me on this pilot,” wrote Molloy in a recent piece for the Huffington Post.

Molloy, a native of Co. Offaly, has taken to wearing something green every day in March in years past, but for 2016 decided to broaden her campaign to include all aspects of Irish fashion.

“I decided to be less literal this year and go Irish designers versus color green. It's getting a great reaction all over social media,” Molloy says.

Each day Molloy posts a photo on her Facebook, Twitter and Instagram feeds with the hashtag #wearingirish, and caption credits to the Irish designer she’s showcasing.

Molloy encourages fashionistas to “commit to posting once or many times during the month. Dress head-to-toe in Irish fashion or pick one item or accessory to celebrate. Go casual, work wear, party, occasion, traditional or contemporary. The idea is that you are wearing Irish without compromising your style,” she writes.

“I see an opportunity for everyone who is both a fan of fashion and a fan of Ireland to come together, using social media, to support Irish designers. Imagine the possibilities if all fans use our influence to spread the word by posting the pictures that show how wearing Irish fashion is a choice we are making. My vision is to make this 2016 pilot a broad movement in the coming years with women and men globally wearing Irish and posting pictures in March.”

Molloy writes that the quality and creativity of Irish fashion designers is world-class -- a little-known fact, she says, that needs to be publicized to a greater audience.

“The biggest revelation of my personal hunt was that the awareness of modern Irish fashion brands and the Irish fashion industry as a whole is very low, even among people who love fashion. This is a pity,” says Molloy.