Dublin tram drivers are on the wrong track with strikes

Last weekend there was another two-day strike by the drivers of the LUAS, Dublin's light rail tram system, in a pay raise campaign that has now gone on for months. 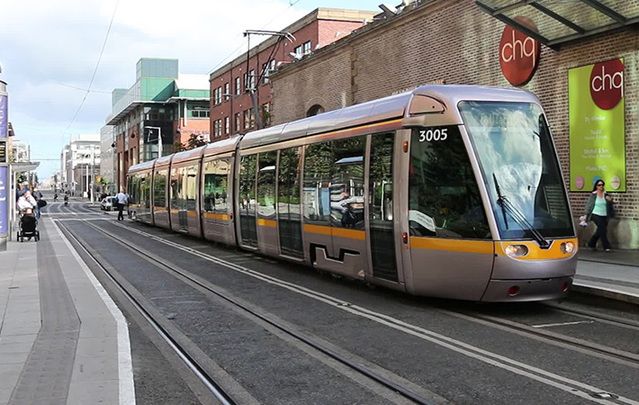 The LUAS tram driving by the CHQ building in Dublin 1. RollingNews

Last weekend there was another two-day strike by the drivers of the LUAS, Dublin's light rail tram system, in a pay raise campaign that has now gone on for months.

Already among the highest paid tram drivers in Europe -- they earn around 30 percent more than tram drivers in Britain, for example -- there is no way their claim for a 50 percent increase over five years can be justified. But that has not stopped them.

Last week, after long and tortuous negotiations at the independent Labor Relations Commission here, they rejected a settlement proposal of close to 20 percent. Back in the real world, in the private sector where companies have to make a profit to survive, workers can only dream of such an offer. But despite the ludicrous rejection, the tram drivers' union is still giving them its full backing.

The two day strike last weekend followed a similar LUAS stoppage over the Easter weekend, deliberately chosen to create maximum inconvenience to the hundreds of thousands of people who were coming into the city center for the 1916 centenary commemorations and the big parade. That was an absolutely outrageous move by the 172 tram drivers and caused an outpouring of public anger.

It's only one small group of workers and although very annoying for Dubliners, it might not seem to be that significant. But the possible repercussions of what is going on are very serious for the country because many other workers on the state payroll are waiting to see if they can piggyback on the outcome of the tram dispute.

So this LUAS pay battle has worrying implications for the country as a whole, for keeping state spending under control, getting back to a balanced budget and thereby continuing the economic recovery. The company which runs the LUAS is private, but it gets a massive subsidy from the state to run the service so it has to be regarded as part of the state sector.

Waiting in the wings to see if the tram drivers can push this through are bus drivers and train drivers, who are already saying they will want matching increases. And in the background other state workers, like teachers, are threatening strike action.

A truly nauseating sight during the Easter weekend was President Michael D. Higgins being greeted at Liberty Hall by Jack O'Connor, the president of SIPTU, the union which represents the tram drivers. A ceremony was happening there, of course, because Liberty Hall is the HQ of trade unionism in Ireland and it's where the union-based Irish Citizens Army gathered to take part in the Easter Rising.

Blithely ignoring the fact that O’Connor’s tram drivers were holding the city to ransom on such a historic day, Higgins proceeded to give one of his waffly speeches about ethics and moral values. He bemoaned the fact that the ideals of those who fought in the 1916 Rising had still not been achieved, and that the social justice and redistribution of wealth that labor organizer and 1916 leader James Connolly wanted had still not happened. The workers were still being ground down by the nasty capitalist system, you see.

We're used to pompous lectures from Higgins to us unworthy citizens who are such a continuing disappointment to him. But really, this was comical.

He didn't have a word to say about the fact that so many people in the city over the weekend were faced with a very long walk home because of the greed of the tram drivers. No wonder O'Connor, the most powerful union leader in the country, was all smiles beside him.

O'Connor is an old fashioned socialist who is also a very high earner. Mind you, he's not in the same class as Higgins, the ultimate champagne socialist who gets a huge salary, lives in the splendor of what used to be the Vice-Regal Lodge and is in line for no less than four pensions when he retires. And manages to do all this while he pontificates to the rest of us about the inequities of Irish society!

It's all a bit of a laugh but, as we pointed out above, there are serious consequences from this kind of nonsense.

In the private sector, which generates the money to pay workers in the state sector and keep Higgins in the style he expects, workers have regained very little of the pay cuts, lost bonuses and lost extras that were imposed on them during the economic collapse. In particular, the guaranteed pensions that used to exist in many private companies have been closed down or drastically cut.

It's likely to be a good few years before workers in the private sector get back to where they used to be financially before the crash, although the pensions are never coming back. That's the reality and most workers in private companies accept it, even if they don't like it.

In contrast with this, however, workers in the state sector are now pushing hard to get back everything they lost during the austerity cutbacks and threatening strikes to make that happen.

First of all, they are looking for substantial pay increases but they are also looking for action on their guaranteed state pensions for life. They want the small extra deductions that were imposed on their pay during the crash to fund some of the cost of their state pensions to be fully restored.

Meanwhile, workers in the private sector who had saved up money in private pension pots had their funds raided during the crash with an annual tax levy. But there are no proposals to give that money back. You couldn't make this stuff up!

All of this is a symptom of the major gulf that has now opened up here between the private and state sectors. In the last 40 years, union membership here has fallen from 60 percent to 30 percent of the workforce, and most of those who remain in unions are on the state payroll. Because they provide state services like transport, schools, hospitals and so on, these workers are in a uniquely strong position and can cause major disruption to force through what they want.

In the private sector, workers in many of the new companies here, particularly in IT where workers move from job to job frequently, no longer see unions as relevant to getting what they want. They prefer to negotiate individually.

Too often unions have become backstops to preserve outdated work practices and pay rates for some positions which may no longer be justified. This is the case in some parts of the private sector where unions remain, but it is particularly the case in the state sector where everyone is in a union and the resistance to change and efficiency is significant. All new initiatives have to be "bought" with higher pay instead of being an accepted part of economic life in the 21st century.

The LUAS tram drivers are planning another strike for the weekend of April 23/24, and further stoppages are likely because there is no resolution in sight. Currently, the LUAS drivers' pay ranges from €35,900 for a 39-hour week in year one to €42,250, after nine years. And that is before the 19 percent increase they have turned down, which was to be introduced gradually over the next five years.

Their starting pay, after training which takes around eight weeks, is already far higher than a new teacher, for example, who spends four years in college to get the necessary qualifications. Driving a tram is a relatively straightforward job, far easier than driving a bus through Dublin's traffic, for example.

Yet, with union backing, the tram drivers are trying to force the rest of us to accept that it is a very highly skilled job that requires a very high pay level. They're doing it because they can -- and the fact that we only have an acting government at the moment is not helping us to face down the blackmail.

The problem with this situation is that it goes back to the pre-bust attitude that the state is a bottomless pit of money and that if there is not enough tax revenue to pay for everything that state workers want (and their pensions), the state must borrow whatever it needs to fill the gap.

That's the kind of thinking that got us into the mess we are just now emerging from. And that is why this dispute involving just 172 tram drivers is of national importance.