Dragons are coming - Battle for Irish presidency begins… and Trump

As most of ye over there know very well, there is nothing we at home here on the Emerald Isle relish as much as a good rousing election with all the craic and sound and stimulation that goes with polling battles. 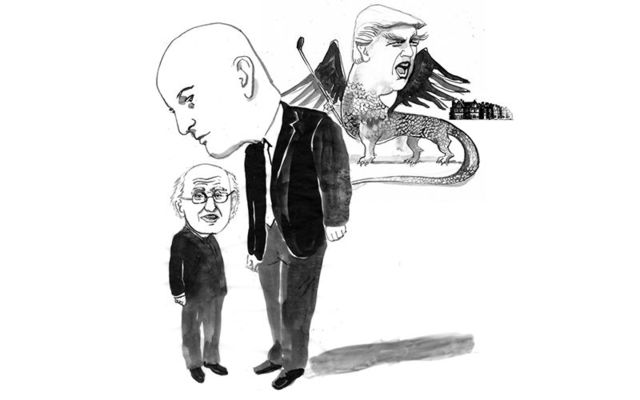 As most of ye over there know very well, there is nothing we at home here on the Emerald Isle relish as much as a good rousing election with all the craic and sound and stimulation that goes with polling battles.

The mighty news this autumn is that we have a real beauty coming up in just a few weeks time.  There has never been another quite like this one in the history of the Republic.

It is a real genuine David and Goliath battle, and the intriguing slight possibility concurrently exists that we could even have TWO rousing elections by the time the New Year arrives on the political horizon.

Back, however, to the certain David and Goliath battle which involves our outgoing President Michael D. Higgins. He is seeking a second seven-year term after, by common perception, serving his country with style, principle and intellectual substance for the last seven years.

On the surface he is the David in the upcoming campaign, being a short and slightly built man who will be in his early eighties when, in the opinion of most political pundits, he will clearly and relatively handily be re-elected.

Again, in a unique twist of many coils attached to the developing campaign, he has the backing of all the major parties in Leinster House with the exception of Sinn Fein. They have yet to name their candidate but they are certain to be in the field when the ballot boxes open.

But I am fascinated entirely by the manner in which other candidates are tearing around the land by the day and hour in a drive to secure sufficient statutory support to get their names on the ballot papers that will be rustling into the boxes come November.

Ye see, Michael D. can and will nominate himself for re-election when he feels the time is opportune.  That is his right by dint of his office and position.

Other candidates, however, apart from the Sinn Fein nominee, have to secure the support of either 20 national politicians sitting in the Dail in Leinster House or, since that is not possible at all, the support of four county councils. That is why they are all making their pitches to councils from one end of the Republic to the other, essentially promising to provide us with a different and more modern class of presidency than that provided to date by Michael D. Higgins. The situation is developing by the day and hour at the time of writing.

There is another linguistic kind of twist which ye will hardly believe at all.  Many of the contenders are known to us as dragons because, in summation, they are all wealthy entrepreneurs who have been judges on a popular TV show called The Dragons Den.

And one of these dragons, the well-known Sean Gallagher, who contested against Higgins last time, has already secured the necessary statutory support from the councils to run again. Other dragons are likely to be joining him in creating a Goliath of opposition to the outgoing president when polling day arrives in November.  Is that not very special stuff altogether?

There is more of it. The dragons in the field, despite the fearsome reputation attached to the fire-breathing creatures they are named after are, to a man, breathing honeyed promises over our heads.

Several of them have said they will not accept any salary at all for serving us as president, or will only accept a sharply reduced payment for the position, or will divert any salary they are forced to accept if elected to worthy causes and charities throughout the land. These are benign dragons indeed.

The mind boggles. My mind is certainly boggled by now.  And that is not the end of the story either.

You see again, in an amazing coincidence you couldn’t plan, the one many are calling the biggest and most powerful dragon of all, because of his connection with the similar TV reality show in the U.S. -- I don’t need to name him surely -- is scheduled to visit us, and especially visit his golf resort in Doonbeg in my Clare whilst the dust of the David and Goliath battle is still hanging in the air!  Unbelievable!

And The Labour Party and the Green Party in Leinster House, together with several powerful enough independents, are planning to support the inevitable protests that will punctuate the arrival on what we call the Wild Atlantic Way along the west coast of this most controversial dragon of all.

We have emerged from a climactic summer heatwave just in time to be assaulted from all sides by a political class of autumnal heatwave the likes of which we have never experienced before.  There are many ways of viewing the situation but, as I said above, no nation enjoys elections more than we do.

All that occurs before the David that is Michael D. slays whatever Goliath assembly emerges before him will certainly brighten up the entire winter.

It’s all great craic isn’t it?