I'm quite proud of the fact that I heavily criticized the dreadful Conor McGregor in this space last year, not for his financial feats at all but for draping himself constantly in our proud Tricolor when raking in his brawling millions. 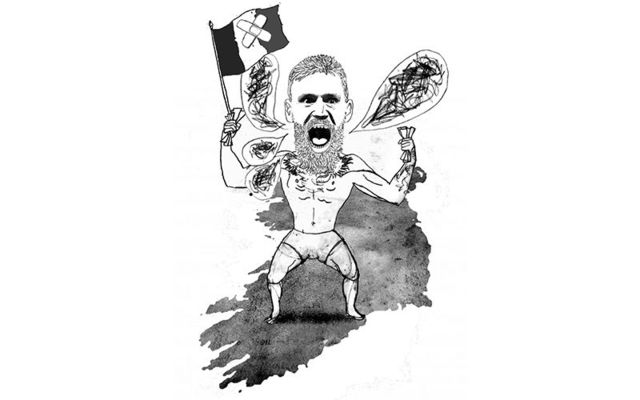 Why are man Cormac's been over Conor McGregor for some time. Caty Bartholomew

I'm quite proud of the fact that I heavily criticized the dreadful Conor McGregor in this space last year, not for his financial feats at all but for draping himself constantly in our proud Tricolor when raking in his brawling millions.

As I said clearly then, I am delighted he is making those millions of dollars in a tough pugilistic world, but it was demeaning of our national flag that it should be so blatantly used as a mere prop along the way.

The ugly scenes and brawls around his defeat in the comeback bout last Saturday night in Las Vegas underscored that reality, as did the fact he was filmed aiming a kick at his opponent in the preliminary face-offs aimed at increasing the international cash take from the bout.

Read more: Time for McGregor to stop fighting before someone gets killed

I cannot strongly enough agree with the views of my former Irish Press and current Irish Voice colleague John Spain expressed a couple of weeks ago before McGregor’s comeback ended in ignominious defeat.  Cannot honestly state I shed any salt tears over that!

The loudmouthed Dubliner McGregor has done more damage to the Irish image globally in the last couple of years than about any other Irishman or woman. The woeful brawls after his comeuppance on Saturday night must have reinforced for too many the perception of the Irish as being a stone mad, drinking, brawling race fit for little but Paddywhackery and amused contempt.

As our John Spain wrote, McGregor, as a sporting millionaire, could have used his fame to become a positive role model for his race both at home and abroad. The shameful opposite is sadly the case.

There was good solid advice from some sources advising McGregor to quit fighting before somebody gets killed ringside.  We’ve come uncomfortably close to that stage already.

There is no chance, however, that the real Notorious, as Conor styles himself, will quit anytime soon. There is talk of a rematch against Khabib Nurmagomedov, who defeated him so decisively, and the millions of dollars are continuing to pour into his coffers.

Some of these, I’m sure, are being generated through sales of his new whiskey. I grinned broadly and wryly at a description of the whiskey as “nutty.”  Appropriate across the scale I suggest.

Many of us from the Irish yesterdays who gathered around the dawn radios for the world boxing title fights of our youths, when there was only one title to be won rather than a profusion of competing belts nowadays, would feel that there is both an elemental excitement and a brutally balletic factor inside boxing rings.

Equally, many of us would not be impressed hugely by the half-boxing, half-wrestling and unattractive octagonal arenas inside which McGregor has grafted out his millions. His format has its followers, of course, and Irish fans (most from his from Dublin) traveled over to see his submission to a chokehold relatively quickly after all the hype.

You may put that tricolor down Mr McGregor!

Some of them were fortunate enough not to have been injured badly in the subsequent ringside brawls. Thank God for that.  One can’t thank The Notorious for that because his braggadocio in the build-up created the climate in which unsavory things were very likely to occur.

There are more than enough suckers in this strange modernity of ours for a hugely lucrative rematch to be virtually guaranteed. Some reports suggested that McGregor was somewhat ring-rusty after two years without a fight.

His mouth, though, as ever, was not rusty at all, at all. Too bad about that reality.

Will you be amongst those near ringside for The Notorious rematch? Whether from Ireland or from the diaspora, will you too drape yourself in the Tricolor and maybe risk your life in explosive aftermath scenes of reductive bedlam?

Will you feel like a sucker for punishment and exploitation at any stage of the process of further enriching McGregor? Or will you feel like a proud Irishman or woman while you take a swig from your hip flask of that nutty new whiskey for the further enjoyment of a great sporting occasion?

Probably you will be consoling yourself after a Notorious submission to another chokehold!

After all the headlines and deadlines that keep the brawling kind of bandwagon rolling along, here is one old hack who has just made his own decision on the matter, so here goes.

This is the very last occasion in any outlet I serve in which I will mention the name of McGregor.  Ye can take my word for that and call me to order if I stray away from that promise and decision. It is highly unlikely that will happen.

In that way, I will feel no guilt at all for any injuries or worse that may crop up in the vicinity of The Notorious one.

That promise and decision begins here and now.

Read more: What Cormac had to say about Conor McGregor's use of the Irish flag