Slainte!  I hope the first page on your sparkling new calendar finds you all equally sparkling and prepared for anything 2019 throws at you in the weeks and months ahead. 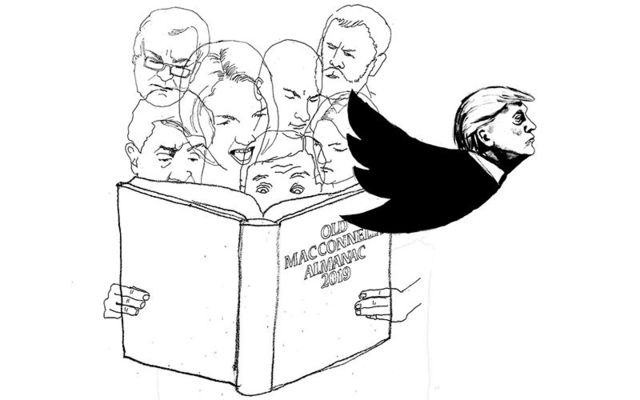 "Old MacConnell’s Almanack has been put on the long finger. Maybe I’m not equipped properly to publish any class of an almanack." Caty Bartholomew

Slainte!  I hope the first page on your sparkling new calendar finds you all equally sparkling and prepared for anything 2019 throws at you in the weeks and months ahead.

Me? I’m in hot water up to my eyeballs despite the fact that a chilling wind is blowing today from Tipperary into my Clare.

The sad situation is that in a lighthearted piece for an Irish publication I said I was shortly launching Old MacConnell’s Almanack of predictions for the year ahead as a direct challenge to the publishing monopoly so long enjoyed by the perennial Old Moore’s Almanack which many of you Irish-born readers will remember clearly from your childhoods. I was offering a bit of craic to the readers of that publication but, dammit, things went badly astray on me.

What occurred was that after predicting that John Bull would think twice about this Brexit business in a second referendum on the subject, the result of which would be announced on April 1, 2019, which we know is All Fools’ Day, I went merrily meandering over the rest of the year’s events to come, just like Old Moore has been doing for more than a century, and drew the wrath and ire of many readers upon my grey head with predictions such as that British Prime Minister Theresa May would be ousted from her own Conservative Party in Westminster long before that second referendum and would not be succeeded by any man but by another lady we know little about yet.

No readers were too irked by that, but two further predictions got me into very hot water indeed. The first of these was that Cork will win the hurling All-Ireland hurling final next fall. And the second was my reference to your noble president as “a tweet of a leader.”

That was strongly criticized by so many Irish readers of the newspaper in question that Old MacConnell’s Almanack will now be unlikely to ever see the shelves of the bookshops of the Emerald Isle.

Readers from all the hurling counties in Munster and Leinster were sharply offended by my statement that Cork will triumph in Croke Park’s headline hurling event in the autumn.  They responded in numbers and I can readily understand that.

What I did not expect at all was the anger at my reference to Donald Trump as a “tweet of a leader.”  I was amazed at that.

I always knew that we have a strong Irish Republican strand in our psyche, but was surprised at how many readers criticized me sharply for referring to your noble leader as a tweet of a leader. We have inbred respect over here, as ye know, for leaders elected through the democratic process, but I was still shocked and indeed awed.

It will take me the rest of the year to try and figure that one out but, in the meantime, my poor Old MacConnell’s Almanack has been put on the long finger. Maybe I’m not equipped properly to publish any class of an almanack. Time will tell, but in the meantime, I’m soaked in the hot water of widespread criticism.

There’s a prickly kind of surreality around my Shannonside home in Killaloe and over the island generally as the infant year gets into its stride. That has always been the way.

We are working class up and down the scale of life, after all, and not at all equipped to relax fully during an extended and exciting festive season like Christmas and another year. The good news is that the economy is in good shape again, after a decade of austerity, that our leaders, especially the Taoiseach Leo Varadkar currently, are representing us well in relation to Brexit in any form, deal or no deal, and even more heartwarmingly, many of the bright Irish generation forced to emigrate during the harsh years of austerity are returning home with a wide range of entrepreneurial skills and dreams which, in the short term, can only benefit all of us in the mystery that is the future for all of us.

There is an unprecedented demand for Irish passports these days, not just from Irish born in the Republic but also from those overseas everywhere who foresee all kinds of opportunities for themselves and their families from any kind of Brexit fallout in March. The day of decision is closing in sharply fast hour by hour. And, truly, it is as exciting as it is potentially threatening.

Sure that’s life with all its quirks and surprises, as Armagh couple Patrick and Marie Connolly discovered lately when they won multi-millions on the Euro lottery. Champagne days ahead for sure.

I sincerely hope that many of you will experience a bubbly year as well.  Try and avoid the hot water of scalding criticism which Old MacConnell is suffering from at the moment because he referred to a noble leader of the world’s second most powerful nation as a tweet of a leader.  By our errors we learn.

Suitably admonished, I will leave it there for now. Relish the challenges of the mysterious months ahead, be delighted that you will not have to waste good cash buying Old MacConnell’s Almanack, at least in the immediate future.

And, given the lovely experience of the Connolly family above in Armagh, would it be a worthwhile exercise to spend a few bucks today in the purchase of a lottery ticket. You never can tell for sure what will happen afterward in the mystery of the year ahead.

And, with reluctance, maybe the resilient Old Moore of the famed almanack can direct you further much more accurately than Old MacConnell!