"Ah yes, as Dickie Rock sang beneath the crystal balls of a different Ireland, I remember it well as another brighter and infinitely freer Easter comes again." 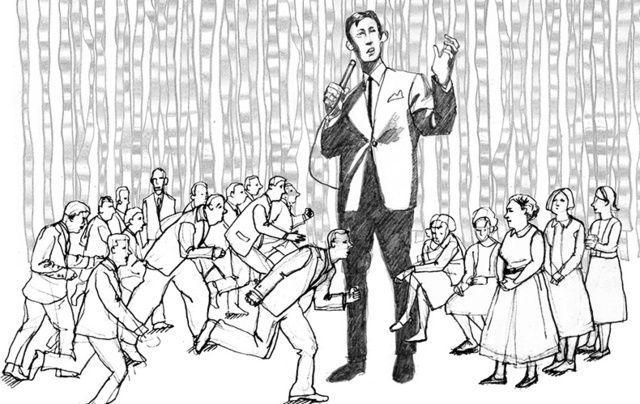 "Ah yes, as Dickie Rock sang beneath the crystal balls of a different Ireland, I remember it well as another brighter and infinitely freer Easter comes again." Caty Bartholomew

Dickie Rock, one of the monarchs of the show band era in the Ireland of yesterday, is still singing away as powerful as ever at the age of 78 years.  An article about his longevity in a demanding industry catches my wandering eye and accelerates me back to the years of his heyday in the big ballrooms of the day before yesterday.

And, as Lent ends and another Easter looms brightly ahead, I reflect on what was truly the terrible beauty of much of what rural life was like back then for the boys and girls of the rising generations when the Catholic Church was in such total control of all our lives.

Many of you will not believe the realities which I am about to spell out now about what it was like back then up to the seventies of the last century. And that is not too long ago at all.  But check with someone you know who lived through it in the Ireland we had then and you will discover this is all totally accurate.

The seven weeks of Lent back then, for example, were weeks of real mortal punishment for all. Strongmen doing heavy manual work had to observe a strict fast which allowed only one meal a day. It was a mortal sin to eat meat on a Friday.

Children had to abstain from their treats like sweets and comics and suchlike. And boy could not meet girl because, believe it or not, the church ordered that all the provincial ballrooms must close down for the weeks of Lent. The only exception was for the night of St. Patrick's Day and boy, did you look forward to that!

And Dickie Rock and his band, like all the other show bands of note, had to go over to England or elsewhere outside the country to ply their musical trade there until Easter. That was the way it was.

And that is only one element of the social jigsaw. The huge big ballrooms in every county were never permitted to serve alcohol. They were called dry ballrooms.

If you were fortunate enough to talk a girl into sharing a drink with you during the dance it was either tea or orange squash you shared.  If you had taken a drink before coming to the dance you better have a packet of mints in your pocket to mask that reality because many of the girls would not dance with you at all if there was drink on your breath.  And they could never go into pubs themselves either.

And the gender realities on the maple floors under the spinning crystal balls overhead was telling as well. The boys and men, overwhelmingly from farms, outnumbered the girls by ratios often as high as 10 to one. Many of the young women, you see, had managed to secure positions in the civil service in Dublin or were nursing or teaching or doing secretarial work up there.

The gender imbalance was such that when Dickie Rock announced the next dance the charge across the floor from the male to the female side of the hall was akin to that of a herd of buffalo.  You had to move fast under your Brylcreemed hair and behind your Windsor-knotted tie to have any chance of getting a dance partner at all. Ask anybody who lived through it.

So the ballrooms of romance were often ballrooms of nodance for many of us lads who were too slow off the mark in the charge across the floor. The girls had a wide selection to choose partners from and, sadly for this manlet of a yoke, with a black goatee beard, when beards were still regarded with suspicion, I was often rejected on sight.

If I did get a dance, however, I had a hidden advantage over many of the farmers around me. I had the soft hands of an office worker, you see, at a time when the girls did not wish to marry farmers and enter into the hard enough lifestyles of their mothers. Maybe I was a teacher or a bank clerk, I could see them thinking as we danced.

The one thing I could never reveal, incidentally, was that I was a reporter because that made me one of the breed that had splashed the story of Uncle Hugh's crimes all over the local papers.  So I was always vague about my precise trade.

And because I was an excellent jiver when the jive was at its peak and had those interesting hands I very occasionally "scored” -- the word the lads used then -- and she would consent to let me walk her outside to the hackney that was bringing her group home after the dance.

Uninhibited sex outside in a doorway before that?  Not at all, none of that stuff. That was sinful in a state without any contraception of any kind except modesty and abstinence.

You'd be lucky to get 15 kisses and a cuddle, and normally she would keep her overcoat closed tightly to keep the hungry bodies well apart.  And if you did not ask for a date before she joined her friends again then you were already history and she was being slagged for having wasted her night with a weedy little guy with a whisker on him. What got into you?

Ah yes, as Dickie Rock sang beneath the crystal balls of a different Ireland, I remember it well as another brighter and infinitely freer Easter comes again.

You still don't believe me? Ask anybody who was there when Dickie Rock was king.