No cure for election fever in the UK or in Ireland

Election fever is an epidemic! In Ireland, the United Kingdom, with Brexit and in Leinster House and "not a vaccine in sight to offer solace to the millions of victims involved" 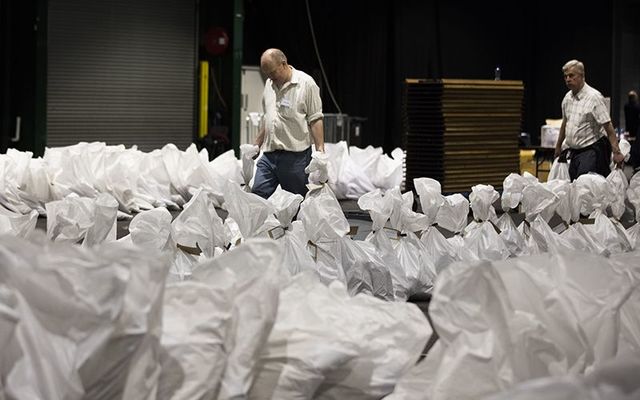 Staff coordinating bags of votes for the European elections at the RDS in Dublin on Saturday. RollingNews

Election fever is an epidemic! In Ireland, the United Kingdom, with Brexit and in Leinster House and "not a vaccine in sight to offer solace to the millions of victims involved"

All the global furor about the measles epidemic and the merits of vaccines to halt the spots in their tracks on both coasts of our Wild Atlantic Way obscures recognition and media coverage of a far more dangerous and infectious health condition raging through the Emerald Isle, all of Europe and the rest of the globe indeed, and not a vaccine in sight to offer solace to the millions of victims involved.

I’m sorry to state that I am among those victims.  If the rest of this piece is even more maudlin, disjointed and plain crazier than usual, then forgive me please.

I am feverish, exhausted, bamboozled entirely by an unending media tide of coverage, not just of Irish elections at the grass roots, but the European elections being held in tandem, and a divorce referendum. The TV screens nationally, in all fairness, are as feverishly hot and bothered as I am.

There is a bewildering range of currents of change on all fronts.  Last time there was a referendum on divorce details here, for example, there was only a wafer-thin victory for those in favor of the measure.

This time around, in the New Ireland, there was an absolutely overwhelming majority of over 82 percent in favor of a more liberal, tolerant and compassionate state attitude towards all the victims of broken marriages and partnerships.  That was heartwarming for certain.

Election fever victims like myself, with no vaccines available, will simply have to suffer all the strains and symptoms for at least three weeks of this new summer. It could be even longer than that indeed because of the Tory Party infighting in the U.K.

Westminster stands in the wake of British Prime Minister Theresa May’s tearful departure last week, and the impending arrival in my already agitated Clare of your noble leader Donald Trump, fresh from Buckingham Palace, to visit his golf resort center in Doonbeg in West Clare. As ye know he owns his own slice of the rugged Wild Atlantic Way there.

Otherwise there could be a blast of tweets and twitters the next dawn that could have dire consequences for us all. God is good most of the time. Everything will go okay.

Returning to my election fever symptoms and those hot TV screens 24/7, it is an indication of the complexity of a Europe facing the likely consequences of Brexit by John Bull, that the ballot papers which the counting staff are processing here in Ireland, are no less than two feet in length because of the number of contenders involved. At time of writing at the beginning of the week, only one Irish Member of the European Parliament (MEP) has been elected, the outgoing Mairead McGuinness, though other outgoing MEPs such as Cork’s Sean Kelly are on the brink of retaining their seats against a backdrop in which the Green Party here, at all levels, is doing very well.

Sinn Fein is having a very bad day. Fianna Fail is scoring highest on the domestic front. Labour are suffering sorely (just like Labour in England).

The fearsome Nigel Farage of the Brexit Party over in the U.K. is winning all before him, and if there is talk on the English airwaves of the possibility of another referendum on the Brexit issue there, there is also growing speculation here in the Republic that Leo Varadkar of Fine Gael, the second largest party, might not back away from a snap general election here before the end of this incredibly haptic and feverish year. No wonder my old head is spinning!

Those of you born and bred over here, and aware at any level of our voting system for home elections to Leinster House, will not be too surprised by the fact that two candidates battling for the last seat on the Shannon council panel finished absolutely level on votes after numerous counts there.

I will not name the contenders because there could be a legal tailpiece to this situation, but it seems that of now the seat was ceded to the candidate who had secured the most first preference votes at the beginning of the day. We will keep a sharp though feverish eye on the outcome of that rare situation for you in the near future.

Meanwhile the citizens of our major cities, for the first time ever, will soon be directly electing their own mayors, with Limerick likely to be the first to do so. Again, if I survive my malady for the next couple of days, I will faithfully report developments.

Now it is back to those red-hot TV screens for more excitement.  Slan go foill!