Country music is alive and kicking in Ireland

"It is all a magical kind of musical mystery which ye can check out for yourselves when you get over here on vacation." 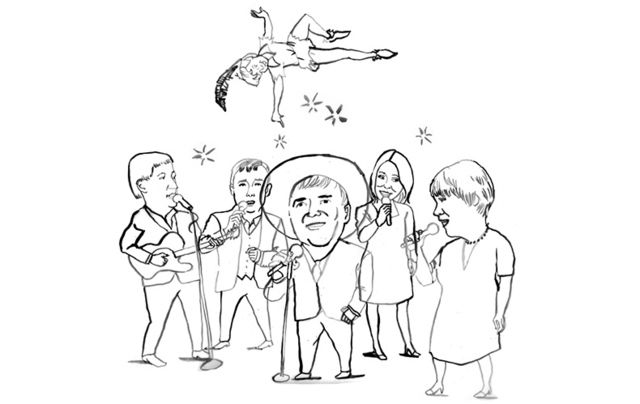 As I write this remarkable yarn the TV is rocking in the corner of the living room with the musical vitality and energy of country singer Sandy Kelly belting out "Rolling In My Sweet Baby's Arms" with a full country band behind her and a packed audience swaying in time and clapping at every opportunity. It's so lively that I am swaying myself as I tap the keyboard.

That prime time program perfectly illustrates an amazing entertainment revolution in Ireland in the last two years. Those of you visiting this land during the year are likely to notice it almost immediately. Those of you who were born and raised here anytime over the last 50 years or so will not be so surprised at what you will hear and see on nights out.

Country music has always had a following in Ireland during my lifetime and yours.  However, it is a fact that it was almost driven into the shadows during the heyday of the Irish showbands  from the fifties onwards.

Many of ye know well that those hundreds of showbands drew hundreds of thousands of us to the huge "dry" (no alcohol!) ballrooms of that era.  Those showbands, like the Royal Showband and the Capitol Showband and Dickie Rock and the Miami, largely played covers of the pop music of the day and drew huge audiences every night.

Those big glittering ballrooms, with nothing stronger to drink than Coke and orange squash and tea, again as many of ye know, were the arenas in which boy met girl, the arenas where romances blossomed and converted themselves into marriages. Without them for sure the marriage rate would have been minimal.

Anyway, as again many of ye know, the showbands melted away like snow from the ditches when the disco and nite club scene exploded over Ireland in the sixties. Now you could dance and drink alcohol to your heart's content.

And the discos did not feature country music at all at all. The beat and the era was different altogether.

And if the showbands were driven off their stages one would have believed that the county stars that preceded them were gone, never to return. And, incredibly, how wrong that opinion has proved to be during the past couple of years during which country music has stolen the limelight from every other musical genre. That reality, believe me, has also created a complex social resurrection at several levels.

The fact that Sandy Kelly is singing away sweetly as I write this illustrates a kind of musical miracle truly beyond my ken.  Sandy Kelly, you see, has been around the musical scene for many decades but, dammit, the lady I am viewing now (duetting with Charlie McGettigan) looks little more than 20 years old and is singing as sweet as a thrush.

Music, the old ones said, has charms to soothe the savage breast. It has more than that.  There is a Peter Pan element to the country music revolution which is mind boggling and does not just apply to the stars of the past, like Sandy, who have emerged so brightly from the shadows to entertain us again.

Peter Pannery? Let me inform ye that the king of the country music revolution is the Monaghan singer called Big Tom. Many of you danced to Big Tom and his Mainliners showband a lifetime ago.

Well, with the benefit of all the prime time coverage of the country music revolution, I can inform you all that if Sandy Kelly looks 20, nowadays Big Tom, who is now assaulting his eighties, being born in 1936, looks so fresh-faced that you would not put him above 60 years old.

The voice which created country classics like "Four Country Roads" and "Gentle Mother" is totally intact as well. He is on TV shows over here about every night of the week along with other amazingly well-preserved veteran stars like Declan Nerney, TR Dallas, Philomena Begley and many more.

We have ample chances on TV and in the flesh to enjoy them too. The most popular Irish TV show of all is The Late Late Show, hosted for so long by Gay Byrne.  It recently handed over an entire show to country stars headed by Big Tom. Weekly, also on prime time, there is a show called Stetsons and Stilettos, the title of which is self-explanatory.

And there is more, much more. These shows, together with country festivals sprouting up all over the land this summer, reveal that though the young men and women who jived and jitterbugged in those "dry" ballrooms in their youth are now pensioners, grandfathers and grandmothers, they too have been positively affected by the Peter Pan phenomenon.

They are as light on their feet now as they ever were, jiving away with incredible levels of energy and skill to all those rejuvenated country stars. They are putting the modern disco dancers to shame. Something medically remarkable is happening for sure.

I gather that the remarkable Daniel O'Donnell from Donegal, how more popular here than ever, is about due in the U.S. for another tour any of these days. If you don't believe what I am writing go along to one of Daniel's shows in your city and ye will see that the man, like Sandy Kelly, still looks as if he is just entering his thirties and is crooning as well as ever.

The same could be said of his older sister Margo, starring over here again, and many others. There is a second wave of new stars too, headed by a singer called Nathan Carter and, beyond doubt, though Nathan can still only be in his thirties, Daniel and Margo both look as young and spirited an lively as he does. It is all a magical kind of musical mystery which ye can check out for yourselves when you get over here on vacation.

It would be prudent to brush up on your long-forgotten jiving skills before you arrive!