"A s*** show could easily describe the tenor of the evening... the Brooklyn leg of the tour did none of the any of parties involved much good." 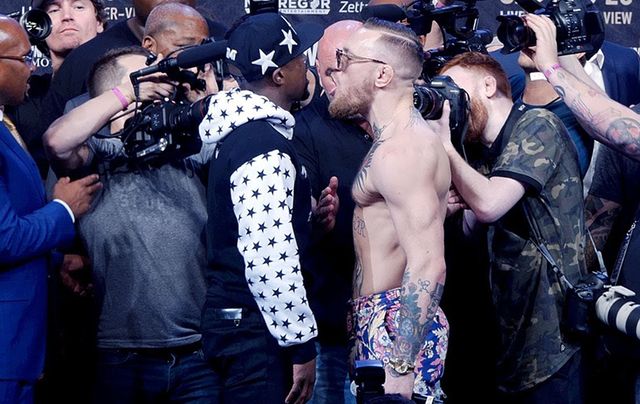 Mayweather and Conor McGregor stand off in Brooklyn.

The third leg of the Floyd Mayweather/Conor McGregor world press tour at the Barclays Center in Brooklyn last Thursday night to promote their boxing match on August 26 in T-Mobile Arena in Las Vegas will go down in the books as one of the more cringe-worthy events that the venue will host this year.  Declan O'Kelly was there.

CONOR McGregor and Floyd Mayweather, who made appearances in Los Angeles and Toronto before the New York stop last Thursday as part of a four-day four-city, three-country tour that culminated in London on Friday, both had evenings to forget. The live event was slated to start at 7 p.m.; McGregor, always the first of the fighters to make the stage walk, did so at 8:28 p.m.

The 13,165 fans, who waited patiently, were let down by the fare offered. During the Toronto leg, McGregor made the ill-advised move to ask Mayweather to “dance for me boy.” There was some press coverage on the negative racial connotations of that remark, and the Irish fighter, who wore only a white mink coat with a purple dragon on the back and a pair of trousers straight out of the John Daly wacky-pants collection, chose to talk about the issue in Brooklyn.\

“Let me address the race. A lot of media seem to be saying I'm against black people. That's absolutely f***ing ridiculous,” said “The Notorious.”

McGregor decided to dig himself deeper into the hole by telling his “beautiful black female fans” that he had a message for them before dancing/gyrating suggestively. The comments fell very flat with the crowd. Very flat.

After the live event, McGregor was asked to clarify the comments at the media scrum, given that they could be interpreted in a negative light.

“That doesn’t sit well with me. I’m very multicultural, a multicultural individual, and I don’t have any ill feelings toward anyone. I don’t even see color, you know what I mean? I just wanted to say something and have a bit of fun with it,” said the 29-year-old.

“Of course we’re in Brooklyn, in New York. Being a Notorious B.I.G. fan, I just wanted to play with it, and address it in my own little way. It’s stupid and it’s ridiculous, which is basically what I was getting at.”

Mayweather, who spent three months in prison in 2011 for domestic violence, took the moral high ground on the issue when he addressed the press after the event.

“I have a diverse team, a diverse staff. And when I was young, I may have said some things that I shouldn’t have said when I was young. But we live, we learn, and you don’t say those things when you get to a certain age because it’s all about growth and maturity,” said the 40-year-old. “I guess when he gets older he’ll look back and say, ‘You know, I probably shouldn’t have said that.’”

Less than 24 hours later, Mayweather seemed to forget his own advice when he called McGregor a “faggot” at the final press stop in London. It was that kind of a press tour. Some moments were entertaining, but others were rife with elements of racism, misogyny and homophobia.

Before it all went south on Thursday night, there was a pulsating atmosphere in the Barclays Center. There were Tricolors everywhere, and McGregor fans were in full voice, so much so that both Swiss Beatz and Doug E. Fresh could barely be heard above the din when they made appearances (Showtime EVP and GM Stephen Espinoza was later booed off the dais when he tried to say a few words).

That said, even with the jeers and the loud crowd, it was very hard to make out what anyone said on the night as the audio and feedback in the arena were terrible. While everyone waited for the fighters to arrive, the Irish Voice caught up with a few Irish fans who came to support their man.

Kevin Collins, originally from Blarney in Co. Cork, came all the way from Boston for the press conference. “I am a massive McGregor fan. This is my fifth event of his. He is the pride of Ireland and a massive inspiration for us all.  It's amazing, the pageantry of it all. It is just fantastic,” he said.

“I am planning to go to the fight, but the way the tickets are going, who knows. I plan to be out on Vegas and out there to support him on the ground. I might end up watching it in a bar there, but I plan to go and show support and loyalty.”

Also there and clad in the blue jersey of the Dubs was Bronx-based Johnny Gartlan, who was out to support one of his own.

"I've been to all McGregor's fights here in the states. I am going. I have it booked," said Gartlan, went added that it costs him about $5,000 a fight but that he was eagerly looking forward to heading back to Sin City in August.

Other moments of note during the live event was the near brawl between the fighters’ entourages. In between calling McGregor his bitch and hoe and showering the Irishman and his group with dollar bills, the 49-0 Mayweather, who made his stage walk draped in an Irish flag which he discarded before sitting down, told his entourage to “form Voltron.”

Team Mayweather, which included a few bodybuilders, made its way towards McGregor. Owen Roddy, (striking coach to McGregor), Artem Lobov (UFC fighter and training partner to McGregor) and Dillon Danis (BJJ training partner to McGregor) led the Irish team who swarmed between McGregor and the advancing opposition. Some finger pointing and jostling ensued (McGregor described it afterwards as “handbags” instigated by “a bunch of juicehead fools”) before order was restored. More insults were exchanged before the evening petered to an anti-climactic halt.

UFC President Dana White took a pop at Showtime when he posted a shot of the schmozzle on Instagram later, saying: “Thank u so much Brooklyn, NY!!!! So sorry about the #s***show It's not my show or it would be run WAAAAAY different. Thanks for always supportin (sic).”

A s*** show could easily describe the tenor of the evening’s entertainment. While the press tour was designed to promote the fight and everyone knew there might be fireworks, the Brooklyn leg of the tour did none of the any of parties involved much good.