Farrell plays a wounded Civil War soldier who doesn’t know what he’s in for. 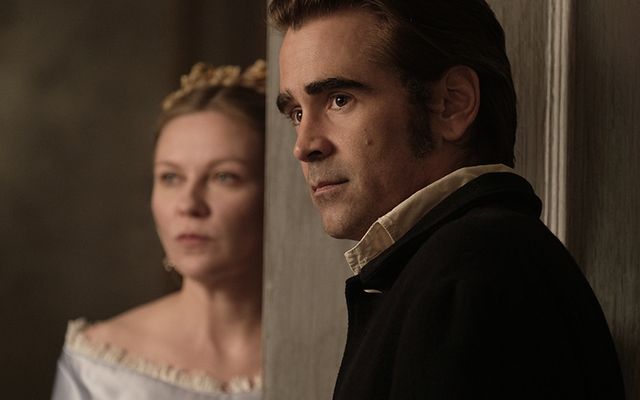 Let me just say this right at the top: Colin Farrell is making terrific films back to back these days. Although the Irish star had some wilderness years professionally and personally (including an infamous sex tape), it seems the lessons he learned have turned him into a uniquely soulful and surprising screen actor, as well as smoldering film star.

In The Beguiled, his latest film helmed by Sofia Coppola which opens on Friday, Farrell plays Corporeal John McBurney, a lost Union soldier who wanders onto an enemy plantation in Virginia in the third year of the Civil War.

It’s Confederate territory but he’s been so wounded by a gun shot to his leg that he can barely walk to escape it.  As the film opens we see him discovered by a young girl who turns out to be from the nearby Farnsworth seminary for young ladies. It’s dumb luck that turns out to be unexpectedly life changing for the stricken Irish soldier.

The prim southern lady Miss Farnsworth (Nicole Kidman, having the time of her life in this buttoned down role) runs the seminary and takes matters firmly in hand from the moment McBurney first appears. She tells him he is a “most unwelcome guest,” but her manners and her Christian faith direct her to help him.

There’s an interesting culture clash right from the outset between all these refined southern belles and this handsome Irish chancer (Farrell plays the role in his own Dublin accent, to great effect).

To them he’s an enemy, but with his strange accent he’s also something of an alien. They’re as intrigued as they are frightened by his sudden arrival.

Apart from Miss Farnsworth the seminary only has one teacher, Edwina Dabney (a slow burn Kirsten Dunst), a young woman in her prime who’s been cooped up in this all female household with no trace of romance or excitement for years.

Dunst is terrific as the deeply repressed schoolteacher who is given a second chance at life though her barely disguised fascination with the good-looking new guest.

Coppola does terrific work setting up the southern gothic atmosphere with scene after scene capturing the tall oak trees hung Spanish moss.  She also captures the highly ordered tedium of the girls’ lives and the shock to their system that McBurney’s unexpected appearance creates.

Pacing the film expertly, Coppola still allows us time to get to know the women. When McBurney arrives he’s become feverish from his wounds.  Miss Farnsworth stitches him up and saves his life.

Farrell brings an undercurrent of menace to his character early on. The questions he asks of each girl are a little too searching, a little too studied, enough for us to understand that’s he’s manipulating them.

A Union soldier, his presence in the house is an affront to their Confederate sympathies, but his medical condition and behind that his physical beauty makes them reconsider before immediately turning him in.

Interestingly, McBurney’s timeline makes him a refugee from the Great Hunger, and later he says he’s from Dublin and that he was simply paid to stand in for some Yankee with the money to buy his way out the service.

The Civil War is not his cause and he would prefer it not to be his fate, we soon learn. When asked how he turned up in the nearby woods he calmly admits that he ran away from a battle. Saving his own neck is his biggest consideration, which is not the best prognosis for love.

As Coppola does terrific work revealing the interior lives of the each of the women, she does less work on Farrell. We quickly understand his main objective is to save his own skin, but that doesn’t explain some of his abrupt tonal shifts between consideration and calculation, between compassion and violence.

And I do mean violence. The Beguiled builds like a period drama until it veers into the nightmarish fairytale horror film that it threatens to be.

What makes the film succeed is the attention paid to atmosphere, the tight ensemble performance from the gifted cast and the welcome novelty of seeing a film unfold from multiple women’s perspectives.

In the distance we often hear the canons of the Civil War punctuating the day like a mad fireworks display that never ends. But inside the seminary fireworks of another kind are being felt.

Coppola contrasts the civility and manners of the seminary girls and their teachers with the violence of carnal temptation and desire. One is always threatening to undo the other, the film reminds us, and so the faraway war is also heard within the house.

There is sometimes a war between men and women too, and in this film it has a body count. But it’s frustrating that the utterly compelling themes Coppola is exploring here never quite cohere into a major statement.

Instead The Beguiled unspools like a very well made bit of southern gothic, one where you can almost feel the sweltering afternoon heat and the welcome excitement of having this world disrupted by a strangers visit.

Farrell and Coppla’s decision to play McBurney in his own voice allows him to contrast brilliantly with his hosts.  He literally sounds like he’s from another world, and it allows the Irish actor a freedom and fluidity on film that feels utterly liberating.

Farrell is finally getting his due as a screen actor, and even though he is ultimately underserved by the women-focused script and directing, he still gives the part the gravitas and skill that only a first rate film actor can.

It’s a missed opportunity to have an actor of his subtlety shadowed by a less well-defined plot line. It’s as if the novelty of seeing the world though the women’s eyes took the directors off the man they are all contemplating.

Nevertheless The Beguiled is a dark and often strangely funny success on its own terms because Kidman and Dunst play the danger and absurdity they are facing to the absolute hilt, turning an overheated pot boiler into a mythic battle of the sexes that's as old as the theatre or romance itself.

It’s going to be a banner year for Farrell, who will star alongside Kidman again later this year in the critically acclaimed The Killing of the Sacred Deer, by the same director of the film that started off Farrell’s welcome screen renaissance in the extraordinary Irish-filmed horror The Lobster.

Farrell is first and foremost a film star, but his complex character work in these absorbing new independents is reminding us – and Hollywood – just what a gifted actor he also happens to be. It’s his time.